Julia Wolfe (born December 18, 1958) [1] is an American composer and professor of music at New York University. According to The Wall Street Journal, Wolfe's music has "long inhabited a terrain of its own, a place where classical forms are recharged by the repetitive patterns of minimalism and the driving energy of rock". [2] Her work Anthracite Fields , an oratorio for chorus and instruments, was awarded the 2015 Pulitzer Prize for Music. [3] [4] [5] [6] [7] She has also received the Herb Alpert Award (2015) and was named a MacArthur Fellow (2016).

Born in Philadelphia, Wolfe has a twin brother and an older brother. As a teenager, she learned piano but she only began to study music seriously after taking a musicianship class at the University of Michigan, where she received a B.A. in music and theater as a member of Phi Beta Kappa in 1982. In her early twenties, Wolfe wrote music for an all-female theatre troupe.

On a trip to New York, she became friends with composition students Michael Gordon and David Lang, both of whom had recently attended the Yale School of Music and who encouraged her to apply. She went to Yale in 1984 and studied primarily with Martin Bresnick, and she married Michael Gordon the same year. After receiving her M.M. in 1986, Wolfe, Gordon, and Lang founded the new music collective Bang on a Can in 1987. [8] Bang on a Can is now an organization with a concert series and tours, and a summer festival in the Berkshires for emerging composers and performers. [8] Wolfe, Gordon, and Lang founded Red Poppy Music in 1993 as a printed music publishing company. The three-founded record label Cantaloupe Music in 2001.

Wolfe received a Fulbright Scholarship to travel to Amsterdam in 1992. In 2012, Wolfe received a Ph.D. in composition from Princeton University. She has been a Professor of Music Composition at New York University in the Steinhardt School since 2009, prior to which she was an Adjunct Professor at the Manhattan School of Music for seven years. In 2015, Wolfe won the Pulitzer Prize for music for her work Anthracite Fields, and in 2016 she was named a MacArthur Fellowship recipient. [8] In 2018, she was a recipient of an honorary degree from Drew University in New Jersey. [9]

Wolfe and Gordon are married and have two children. They live in lower Manhattan. [8]

Wolfe has written a major body of work for strings, from quartets to full orchestra. Her quartets, as described by The New Yorker magazine "combine the violent forward drive of rock music with an aura of minimalist serenity [using] the four instruments as a big guitar, whipping psychedelic states of mind into frenzied and ecstatic climaxes." [10] Wolfe's Cruel Sister for string orchestra, inspired by a traditional English ballad of a love rivalry between sisters, was commissioned by the Munich Chamber Orchestra, received its US premiere at the Spoleto Festival USA, and was released (along with her other string orchestra piece, Fuel) on Cantaloupe Music. [11] Written shortly after September 11, 2001, her string quartet concerto My Beautiful Scream , written for Kronos Quartet and the Orchestre National de France (premiered in the US at the Cabrillo Festival of Contemporary Music under the direction of Marin Alsop), was inspired by the idea of a slow motion scream. [12] The Vermeer Room, Girlfriend, and Window of Vulnerability show Wolfe's ability to create vivid sonic images. Girlfriend, for mixed chamber ensemble and recorded sound, uses a haunting audio landscape that consists of skidding cars and breaking glass. The Vermeer Room, inspired by the Vermeer painting "A Girl Asleep"—which when x-rayed reveals a hidden figure—received its orchestral premiere with the San Francisco Symphony. In Window of Vulnerability, written for the American Composers Orchestra and conducted by Dennis Russell Davies, Wolfe creates a massive sonic universe of dense textures and fragile windows. [13]

The influence of pop culture can be heard in many of Wolfe's works, including Lick and Believing for the Bang on a Can All-Stars. Lick, based on fragments of funk, has become a manifesto for the new generation of pop-influenced composers. [14] The raucous My Lips From Speaking for six pianos was inspired by the opening riff of the Aretha Franklin tune "Think". Wolfe's Dark Full Ride is an obsessive and relentless exploration of the drum set, beginning with an extended hi-hat spotlight, while Lad is a piece for nine bagpipes. [15]

Wolfe drew on oral histories, interviews, geography, local rhymes, and coal advertisements for her Pulitzer Prize-winning piece Anthracite Fields , an oratorio about the coal mining community of her native Pennsylvania which premiered in Philadelphia and was performed at the New York Philharmonic Biennial in the spring of 2014. [16] [17] In 2015–16, the Bang on a Can All-Stars, with first the Los Angeles Master Chorale and then the Danish Radio Vocal Society, gave Anthracite Fields its West Coast and European premieres, and Cantaloupe Music released the studio recording, featuring the Choir of Trinity Wall Street and the Bang on a Can All-Stars.

Wolfe's interest in labor history has informed her recent work, including Steel Hammer , an evening-length art-ballad that was a finalist for the 2010 Pulitzer Prize. The text is culled from more than 200 versions of the John Henry legend and based on hearsay, recollection, and tall tales that explore the subject of human versus machine. Premiered by the Trio Mediaeval and the Bang on a Can All-Stars, Steel Hammer was presented in a fully staged version by director Anne Bogart and her SITI Company at the University of Illinois, UCLA, Virginia Tech, OZ Arts Nashville, and BAM in 2015. [18]

Following her folk interests and the tradition of body percussion in American folk music also led her to compose riSE and fLY, a concerto for body percussionist Colin Currie. The piece premiered in 2012 with the BBC Concert Orchestra, conducted by Keith Lockhart, [19] and premiered in the Netherlands with the Codarts Ensemble and the United States with the Albany Symphony Orchestra in the 2014–15 season. Her most recent orchestral work, Fire in my mouth , was commissioned by the New York Philharmonic and premiered at David Geffen Hall on January 25, 2019. [20] The piece was based on extensive research into the Triangle Shirtwaist Factory Fire.

Music for film and theatre

Her music for theatre includes the score for Anna Deavere Smith's House Arrest, and she won an Obie Award for her score to Ridge Theater's Jennie Richie. She has composed a series of collaborative multimedia works with composers Michael Gordon and David Lang, including Lost Objects (Concerto Köln, directed by François Girard, libretto by Deborah Artman), [23] Shelter (musikFabrik, Ridge Theater, libretto by Deborah Artman), [24] and The Carbon Copy Building (with comic-book artist Ben Katchor). [25] Wolfe created the citywide spectacle Traveling Music with architects Diller Scofidio + Renfro in Bordeaux, France, filling the streets of the old city with 100 musicians walking and riding in pedi-cabs. [26]

Bang on a Can

Wolfe is one of the founders and artistic directors of Bang on a Can (alongside fellow composers Michael Gordon and David Lang), best known for its Marathon Concerts [27] during which an eclectic mix of pieces are performed in succession over the course of many hours while audience members are welcome to come and go as they please. For the twentieth anniversary of their Marathon Concerts, Bang on a Can presented twenty-six hours of uninterrupted music at the World Financial Center Winter Garden Atrium in New York City. In 1992, Bang on a Can founded the chamber ensemble Bang on a Can All-Stars.

Wolfe, Gordon, and Lang occasionally collaborate on jointly-composed large-scale staged works, often without revealing which sections each contributed. The opera The Carbon Copy Building, [28] is a collaboration with comic book artist Ben Katchor, received the 2000 Village Voice Obie Award for Best New American Work. A projected comic strip accompanies and interacts with the singers, and the frames fall away in the telling of the story. Gordon, Wolfe and Lang have subsequently collaborated with writer Deborah Artman on the 'oratorio' Lost Objects, the recording of which was released in summer 2001 (Teldec New Line). [29]

A further project, Shelter, [30] is a multi-media work that was commissioned by the ensemble musikFabrik and features the Scandinavian vocalists Trio Mediaeval in a staged spectacle that, in the words of librettist Deborah Artman, "evokes the power and threat of nature, the soaring frontier promise contained in the framing of a new house, the pure aesthetic beauty of blueprints, the sweet architecture of sound and the uneasy vulnerability that underlies even the safety of our sleep." [31] Shelter was premiered in Cologne, Germany in spring 2005, and received its US premiere in November 2005.

Both Shelter and Carbon Copy Building were staged by New York's Ridge Theater, in collaboration with Laurie Olinder (visual graphics), Bill Morrison (film-maker) and Bob McGrath (director). In 2017 Chinese singer Gong Linna premiered Cloud River Mountain, written by the three Bang on a Can composers in addition to Lao Luo. They also premiere Road Trip, a celebration of Bang on a Can's 30-year journey, together at the Brooklyn Academy of Music in October 2017. [32] 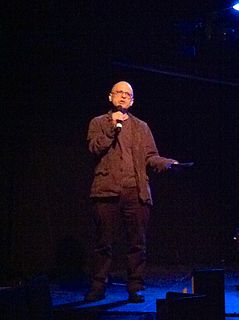 David Lang is an American composer living in New York City. Co-founder of the musical collective Bang on a Can, he was awarded the 2008 Pulitzer Prize for Music for The Little Match Girl Passion, which went on to win a 2010 Grammy Award for Best Small Ensemble Performance by Paul Hillier and Theatre of Voices. He was nominated for an Academy Award for "Simple Song #3" from the film Youth. 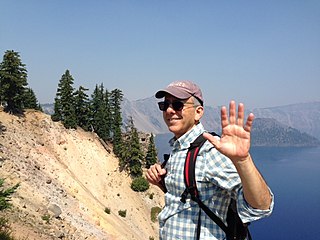 António Pinho Vargas is a Portuguese composer and pianist specializing in jazz and contemporary music. He has also written books, essays, and articles on music.

Alwynne Pritchard is a British performer, composer, artist and curator based in Bergen, Norway. She has also developed choreography for performances of her own pieces. She is co-founder of the music-theatre company Neither Nor and artistic director of the BIT20 ensemble. 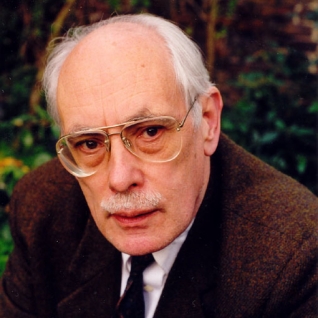 Justin Riveagh Connolly was a British composer and teacher.

Herman David Koppel, known in Denmark as Herman D. Koppel, was a composer and pianist of Jewish origin. Born in Copenhagen, he fled the Nazis with his family in 1943. He wrote 13 symphonies, numerous concertos, and 20 string quartets.

Peter Reynolds was a Welsh composer known for founding PM Music Ensemble. In addition, he was recognised by Guinness World Records as having written with writer Simon Rees the shortest opera on Earth, Sands of Time; a three-minute and thirty-four second long piece. He died on 11 October 2016 at his home in Cardiff.

Liviu Marinescu is a Romanian composer of orchestral and chamber music. He teaches at California State University, Northridge.

David Froom is an American composer and college professor. Froom has taught at the University of Utah, the Peabody Institute and the University of Maryland, College Park. He has been on the faculty at St. Mary's College of Maryland since 1989. He has received awards and honors from the Guggenheim Foundation, the American Academy of Arts and Letters,, the Fromm Foundation at Harvard, the Koussevitzky Foundation of the Library of Congress, the Barlow Foundation, and is a five-time recipient of an Individual Artist Award from the State of Maryland.

Giorgos Koumendakis is a Greek composer. He was appointed musical director and creator of musical scenario for the Opening and Closing ceremonies of the 2004 Summer Olympics in Athens.

Steel Hammer is a 2009 composition for three sopranos and chamber ensemble by the American composer Julia Wolfe. It was first performed on November 21, 2009, at Zankel Hall by the contemporary classical music groups Bang on a Can and Trio Mediæval. The piece is based on the ballad of the African-American tall tale John Henry. The composition was a finalist for the 2010 Pulitzer Prize for Music.

Andrew Waggoner is an American composer and violinist.

Nicole Lizée is a Canadian composer of contemporary music. She was born in Gravelbourg, Saskatchewan and received a MMus from McGill University. She lives in Montreal, Quebec. At one time, she was a member of The Besnard Lakes, an indie rock band from Montreal.

Ann Cleare is an Irish composer. She is Assistant Professor at the Trinity College Dublin. In 2019 she won the prestigious Ernst von Siemens Composers' Prize, sharing it with Annesley Black and Mithatcan Öcal.