From the Diary of Virginia Woolf

From the Diary of Virginia Woolf is an eight-part song cycle written by Dominick Argento in 1974 for the English mezzo-soprano Janet Baker. [1] The work won the Pulitzer Prize for Music in 1975.

Dominick Argento was an American composer known for his lyric operatic and choral music. Among his best known pieces are the operas Postcard from Morocco, Miss Havisham's Fire, The Masque of Angels, and The Aspern Papers. He also is known for the song cycles Six Elizabethan Songs and From the Diary of Virginia Woolf; the latter earned him the Pulitzer Prize for Music in 1975. In a predominantly tonal context, his music freely combines tonality, atonality and a lyrical use of twelve-tone writing, though none of Argento's music approaches the experimental avant-garde fashions of the post-World War II era.

The text of the songs comes from A Writer's Diary: Being Extracts from the Diary of Virginia Woolf, which was published in 1954. [2] (The five-volume diaries edited by Anne Olivier Bell were not published until 1979. [3] )

The choice of a prose, rather than poetic, source for a text is a common theme for Argento, who did the same thing in his cycles Letters from Composers, The Andrée Expedition, and Casa Guidi. In each case, he captures the cadence and flow of these more free-form writings without sacrificing musical structure or melodic interest. The composer's original intention was to use excerpts from Woolf's novel The Waves as the basis for his cycle. But in reading her newly published diaries he discovered a source much richer in musical and expressive possibilities. The highly confessional diary texts illuminate Woolf's inner world in a more immediate way than do her literary works. [1]

Neon Blonde was a supergroup consisting of Johnny Whitney and Mark Gajadhar from The Blood Brothers. They were based in Kirkland, Washington, a suburb of Seattle. The two expanded beyond The Blood Brothers' sound by utilizing a more electronic-based sound, which included electroclash and dance-punk. Neon Blonde's music drew from many genres including post-hardcore, and experimental rock, who have also teamed up with Blood Brothers members to create Head Wound City), and a more electroclash sound. Their music also featured rapping, and rapped vocals in an alternative hip hop style.

Fight for Life is a 1987 American made-for-television drama film starring Jerry Lewis, Patty Duke and Morgan Freeman. It was originally broadcast on March 23, 1987 on the ABC.

Serena Valentino is an American comic book writer, author, and storyteller. She created the comic book series Gloomcookie and Nightmares & Fairy Tales; and she also authored the Disney Villain novels published by Disney Press. The Disney Villain Novels have earned Valentino critical acclaim for her style of storytelling.

Ehsan Elahi Zaheer was a Pakistani Islamic theologian and leader of the Ahl-e-Hadith movement. He died from an assassin's bomb blast in 1987.

Al Koran (1914–1972) was a British mentalist, author and inventor. He invented the Ring Flite and popularised a version of the Bagshawe deck which became known as the Koran deck. Al Koran was the stage name of Edward Doe, who was a former hairdresser that turned professional magician/mentalist. Al appeared many times on The Ed Sullivan Show. He emigrated to the United States in January 1969, first to Cleveland, Ohio, and then later settling in Chicago, Illinois. After his death from cancer, his ashes were handled by his friend and fellow magician Billy McComb.

Holger W. Henke (born in Viersen is a political scientist and vice-chancellor for academic affairs and provost at Wenzhou-Kean University in Wenzhou, China. From 2008 to 2014 he was assistant provost at York College, City University of New York. He has previously taught at Metropolitan College of New York, and also served as associate professor of political history at Kean University. In the late 1990s he was the assistant director of the Caribbean Research Center. 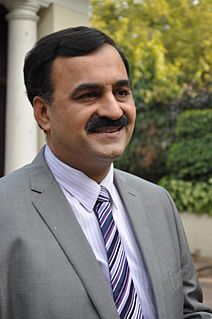 Dr. Pavan Duggal is an advocate specialized in the field of Cyberlaw, E-Commerce law. He is also a member of NOMCOM Committee on Multilingual Internet Names Consortium (MINC). Pavan's was for some time a recognized face as an English newsreader with the Indian state run television network Doordarshan. Pavan Duggal is the Conference Director of the International Conference on Cyberlaw, Cybercrime & Cybersecurity organized by Cyberlaws.Net. Pavan Duggal is the Chairman of the International Commission on Cyber Security Law

Cracks is the debut album by Danish singer, songwriter, and actress Nabiha. The album is in the English language.

Matthew Doerner-Miller, also known as Matt Doerner, is an American entrepreneur and youth mentor. He has experience in a wide variety of entrepreneurial endeavors, ranging from real estate, software development, and international call center implementation. He currently sits on several board of directors throughout North America and Europe as a pro-bono advisor and mentor.

The Best of Kylie Minogue is the fourth major greatest hits album by Australian recording artist Kylie Minogue. It was released on 28 May 2012 by EMI to commemorate the twenty-fifth anniversary of Minogue's recording career, as part of her K25 celebrations. This is Minogue's fourth major compilation album, following the previous major compilation albums Greatest Hits (1992), Hits+ (2000) and Ultimate Kylie (2004). It is also Minogue's only major compilation not to include any new material or to include unreleased and rare material. The album consists of Minogue's major hits, spanning from her 1987 debut to her 2010 album project Aphrodite. 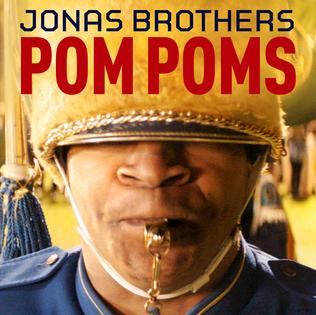 "Pom Poms" is a song recorded by American pop rock band the Jonas Brothers. It was written by Nick Jonas, Joe Jonas, Kevin Jonas and Paul Phamous. The song was released on April 2, 2013 as the lead single from their second live album, Live by Jonas Enterprises. It is the first single not to be released by the trio under their previous label, Hollywood Records.

Paul Jasmin is an American artist based in Los Angeles, CA. Jasmin was an illustrator, a painter, and an actor before finding photography. His commercial work appears in Vogue, Teen Vogue, GQ, Details, V Magazine, V Man, Vogue Hommes, W Magazine, and Interview. Jasmin has illustrated and photographed fashion campaigns for luxury brands, including Valentino, A.P.C, and he sits on the faculty of Art Center College of Design in Pasadena, CA.

Mary Bartlet Leader was the author of two novels, Triad: A Novel of the Supernatural (1972) and Salem’s Children (1979). Triad was the inspiration behind the popular Fleetwood Mac song "Rhiannon".

Elliot Neaman is a professor of history at the University of San Francisco, where he began teaching in 1993. He won the USF Distinguished Research Award in 1999. He received a BA from the University of British Columbia in 1980, an MA from the Free University of Berlin in 1985 and his Ph.D from UC Berkeley in 1992. He also studied with Paul Feyerabend and Paul Hoyningen-Huene in Zürich in 1981-82. His dissertation advisor in Berlin was Ernst Nolte. At Berkeley he studied with Martin Jay, Gerald Feldman, Hubertus Dreyfus and Martin Malia. Neaman was President of the University of San Francisco Faculty Association from 2005-2018. He is an expert in modern European intellectual history, especially twentieth century Germany. Neaman is also one of the editors of a Festschrift for his mentor from UC Berkeley, Prof. Martin Jay, called The Modernist Imagination. Neaman is also a staff writer for Tikkun Magazine and the German conservative publication Junge Freiheit.

When the World is Wide is the debut studio album by Japanese indie rock band Ykiki Beat. It was released on July 22, 2015 by P-Vine Records.

Home is the fifth studio album by Irish singer-songwriter Wallis Bird. The album was released on 30 September 2016. The first two promo singles from the album are "Change" and "Control", with both tracks made available upon iTunes pre-order.