Different Trains is a three-movement piece for string quartet and tape written by Steve Reich in 1988.

During World War II, Reich made train journeys between New York and Los Angeles to visit his parents, who had separated. Years later, he pondered the fact that, as a Jew, had he been in Europe instead of the United States at that time, he might have been traveling in Holocaust trains. [1]

Steve Reich's earlier work had frequently used tape, looped and played back at different speeds. However, Different Trains was a novel experiment, using recorded speech as a source for melodies.

Different Trains is made up of three movements, which bear the following titles:

The recorded version on this album lasts for approximately 27 minutes. [3]

The recorded speech that forms the basis for Different Trains is taken from interviews with people in the United States and Europe about the years leading up to, during, and immediately after World War II. In the first movement, America — Before the War, Reich's governess Virginia and Lawrence Davis, a Pullman porter, reminisce about train travel in the U.S. while American train sounds are heard in the background. In the second movement, Europe — During the War, three Holocaust survivors (identified by Reich as Paul, Rachel, and Rachella) speak about their experiences in Europe during the war, including their train trips to concentration camps. European train sounds and sirens are heard in this movement. The American train whistles are long perfect intervals of fourths and fifths, while the European train whistles are mostly short triadic shrieks. [4] The third movement, After the War, features the Holocaust survivors talking about the years immediately following World War II, along with recordings of Davis and Virginia. There is a return to the American train sounds from the first movement.

Reich developed his "speech melody" work further with projects such as The Cave (1993) and City Life (1995). The technique also appears in WTC 9/11 (2011), a similar work dealing with human tragedy juxtaposed with everyday life and responses to it.

Reich created these works by transferring his speech recordings into a digital sampling keyboard (a Casio FZ-1). City Life used sampling keyboards in performance (rather than using a backing tape) and the samples are notated and played in exactly the same way as the conventional instruments.

The world premiere was performed by the Kronos Quartet at the First Presbyterian Church in Miami, during the 1988 New Music America festival.

Its original recording, also performed by the Kronos Quartet, won the Grammy Award for Best Classical Contemporary Composition in 1989. [5]

Terrence Mitchell Riley, is an American composer and performing musician best known as a pioneer of the minimalist school of composition. Influenced by jazz and Indian classical music, his music became notable for its innovative use of repetition, tape music techniques, and delay systems. He produced his best known works in the 1960s: the 1964 composition In C and the 1969 LP A Rainbow in Curved Air, both considered landmarks of minimalism and important influences on experimental, rock, and contemporary electronic music.

The Kronos Quartet is an American string quartet based in San Francisco. It has been in existence with a rotating membership of musicians for almost 50 years. The quartet covers a very broad range of musical genres, including contemporary classical music. More than 900 works have been written for it.

The Cave is a multimedia opera in three acts by Steve Reich to an English libretto by his wife Beryl Korot. It was first performed in 1993 in Vienna by the Steve Reich Ensemble, conducted by Paul Hillier. The title "The Cave" refers to The Cave of the Patriarchs in Hebron, where Abraham and Sarah are buried.

City Life is a minimalist composition by Steve Reich written in 1995. It is scored for 2 flutes, 2 oboes, 2 clarinets, 2 vibraphones, unpitched percussion, 2 samplers, 2 pianos, string quartet, and double bass. All instruments except the unpitched percussion are to be amplified. Its duration is 24 minutes. It uses digital samplers amongst the instruments used in performance, and these play back a wide variety of sounds and speech samples, mainly recorded by Reich himself in and around his home town of New York City. These sounds include car horns, air brakes, car alarms and many other sounds associated with the city.

Scott Johnson is an American composer known for his pioneering use of recorded speech as musical melody, and his distinctive crossing of American vernacular and art music traditions, making extensive use of electric guitar in concert works, and adapting popular music structures for art music genres such as the string quartet. He was the recipient of a 2006 Guggenheim fellowship, and a 2015 American Academy of Arts and Letters Award.

Black Angels, subtitled "Thirteen Images from the Dark Land", is a work for "electric string quartet" by the American avant-garde composer George Crumb. It was composed over the course of a year and is dated "Friday the Thirteenth, March 1970 " as written on the score. The Latin phrase in tempore belli, in time of war, written into the score by Crumb is a reference to the Vietnam War taking place at the time when Black Angels was composed. Crumb numerically structured the piece around 13 and 7, as numbers traditionally related to fate and destiny. The piece is notable for its unconventional instrumentation, which calls for electric string instruments, crystal glasses, and two suspended tam-tam gongs. The work quotes a portion of the second movement, Andante con moto, from Schubert's "Death and the Maiden" String Quartet.

Electric Counterpoint is a minimalist composition by the American composer Steve Reich. The piece consists of three movements, "Fast," "Slow", and "Fast". Reich has offered two versions of the piece: one for electric guitar and tape, the other for an ensemble of guitars. The work shares similarities with Reich's New York Counterpoint.

Triple Quartet is a piece written by Steve Reich in 1998. It was commissioned by and is dedicated to the Kronos Quartet, and was premiered by them on May 22, 1999 in the Kennedy Center, Washington DC. As the name suggests, the triple quartet is written for three string quartets, each containing 2 violins, a viola and a cello. However, it is designed to be performed by only one string quartet through the use of prerecorded tracks for the other 8 voices.

Eight Lines is a work by American minimalist composer Steve Reich which was originally titled Octet.

Bryce David Dessner is an American composer and guitarist based in Paris, also known as a member of the rock band the National. Dessner's twin brother Aaron is also a member of the group. Together they write the music, in collaboration with lead singer / lyricist Matt Berninger. 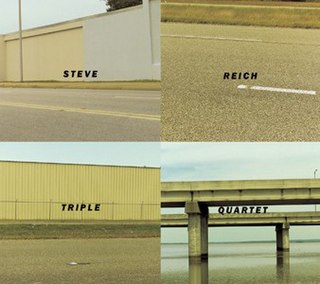 Steve Reich: Triple Quartet is a studio album by the Kronos Quartet and other artists. The music was composed by Steve Reich and was commissioned by the quartet; Reich and the quartet have worked together since 1989.

Piano and String Quartet is a composition by American avant-garde composer Morton Feldman. It was commissioned by the Kronos Quartet and pianist Aki Takahashi, who premiered the piece at the 7th annual New Music America Festival in Los Angeles and released a studio recording in 1993.

WTC 9/11 is a composition by Steve Reich for string quartet written in 2009–2010 which premiered on March 19, 2011 at Duke University. The piece was written for the Kronos Quartet, who performed the premiere, and was co-commissioned by Barbican Centre, Carnegie Hall, Duke University, the University of Illinois at Urbana–Champaign, the Philharmonic Society of Orange County, the Phyllis C. Wattis Foundation, Chamber Music America and the National Endowment for the Arts. The piece is approximately fifteen minutes long, and draws inspiration from the events of September 11, 2001. In 2019, writers of The Guardian ranked it the 17th greatest work of art music since 2000.

Phase music is a form of music that uses phasing as a primary compositional process. It is an approach to musical composition that is often associated with minimal music, as it shares similar characteristics, but some commentators prefer to treat phase music as a separate category. Phasing is a compositional technique in which the same part is played on two musical instruments, in steady but not identical tempi. Thus, the two instruments gradually shift out of unison, creating first a slight echo as one instrument plays a little behind the other, then a doubling effect with each note heard twice, then a complex ringing effect, and eventually coming back through doubling and echo into unison. Phasing is the rhythmic equivalent of cycling through the phase of two waveforms as in phasing. Note that the tempi of the two instruments are almost identical, so that both parts are perceived as being in the same tempo: the changes only separate the parts gradually. In some cases, especially live performance where gradual separation is extremely difficult, phasing is accomplished by periodically inserting an extra note into the phrase of one of the two players playing the same repeated phrase, thus shifting the phase by a single beat at a time, rather than gradually.

New York Counterpoint for amplified clarinet and tape, or 9 clarinets and 3 bass clarinets, is a 1985 minimalist composition written by American composer Steve Reich. The piece, intended to capture the throbbing vibrancy of Manhattan, is notable for its ability to imitate electronic sounds through acoustic instrumentation.

Stringsongs is a composition for string quartet by the American composer Meredith Monk. The work was commissioned by the Kronos Quartet who premiered the piece on January 22, 2005 in the Barbican Centre, London.