Last updated May 13, 2021
This article is about the composer/musician Michael Nyman. For his eponymous album, see Michael Nyman (1981 album).
English composer of minimalist music, pianist, librettist and musicologist

Michael Laurence Nyman, CBE (born 23 March 1944) is an English composer of minimalist music, pianist, librettist and musicologist, known for numerous film scores (many written during his lengthy collaboration with the filmmaker Peter Greenaway), and his multi-platinum soundtrack album to Jane Campion's The Piano . He has written a number of operas, including The Man Who Mistook His Wife for a Hat ; Letters, Riddles and Writs ; Noises, Sounds & Sweet Airs ; Facing Goya ; Man and Boy: Dada ; Love Counts ; and Sparkie: Cage and Beyond. He has written six concerti, five string quartets, and many other chamber works, many for his Michael Nyman Band. He is also a performing pianist. Nyman prefers to write opera over other forms of music. [1]

Nyman was born in Stratford, London to a family of secular Jewish furriers who immigrated from Poland. [2] [3]

Nyman was educated at the Sir George Monoux Grammar School, Walthamstow. He studied at King's College London and at the Royal Academy of Music, with Alan Bush and Thurston Dart, [4] focusing on piano and seventeenth-century baroque music. He won the Howard Carr Memorial Prize for composition in July 1964. [5] In 1965–66 Nyman secured a residency in Romania, to study folk-song, supported by a British Council bursary. [6]

Nyman says he discovered his aesthetic by playing the aria "Madamina, il catalogo è questo" from Mozart's Don Giovanni on his piano in the style of Jerry Lee Lewis, which "dictated the dynamic, articulation and texture of everything I've subsequently done." [7] It subsequently became the base for his 1977 piece In Re Don Giovanni.

In 1969, Nyman provided the libretto of Harrison Birtwistle's opera Down by the Greenwood Side and directed the short film Love Love Love (based on, and identical in length to, the Beatles' "All You Need Is Love" [6] ) before settling into music criticism, where he is generally acknowledged to have been the first to apply the term "minimalism" to music (in a 1968 article in The Spectator magazine about the English composer Cornelius Cardew). He wrote introductions for George Frideric Handel's Concerti grossi, Op. 6 and interviewed George Brecht in 1976.[ citation needed ]. His 1976 album Decay Music was produced by Brian Eno.

One of his earliest film scores was the British sex comedy Keep It Up Downstairs (1976), and he has since scored numerous films, many of them European art films, including several of those directed by Peter Greenaway. Nyman drew frequently on early music sources in his scores for Greenaway's films: Henry Purcell in The Draughtsman's Contract (1982) and The Cook, the Thief, His Wife & Her Lover (1989) (which included Memorial and Miserere Paraphrase), Heinrich Ignaz Franz Biber in A Zed & Two Noughts (1985), Wolfgang Amadeus Mozart in Drowning by Numbers (1988), and John Dowland in Prospero's Books (1991), largely at the request of the director.[ citation needed ] He wrote settings to various texts by Mozart for Letters, Riddles and Writs , part of Not Mozart. He also produced a soundtrack for the silent film Man with a Movie Camera . Nyman's popularity increased after he wrote the score to Jane Campion's award-winning 1993 film The Piano . The album became a classical music best-seller. He was nominated for a British Academy Award and a Golden Globe.

Among Nyman's other works are the opera Noises, Sounds & Sweet Airs (1987), for soprano, alto, tenor and instrumental ensemble (based on Nyman's score for the ballet La Princesse de Milan); Ariel Songs (1990) for soprano and band; MGV (Musique à Grande Vitesse) (1993) for band and orchestra; concertos for saxophone, piano (based on The Piano score), violin, harpsichord, trombone, and saxophone & cello recorded by John Harle and Julian Lloyd Webber; the opera The Man Who Mistook His Wife for a Hat (1986), based on a case-study by Oliver Sacks; and five string quartets. In 2000, he produced a new opera on the subject of cloning on a libretto by Victoria Hardie titled Facing Goya , an expansion of their one-act opera Vital Statistics . The lead, a widowed art banker, is written for contralto and the role was first created by Hilary Summers. His newest operas are Man and Boy: Dada (2003) and Love Counts (2005), both on libretti by Michael Hastings.

He has also composed the music for the children's television series Titch [8] which is based on the books written and illustrated by Pat Hutchins.

Many of Nyman's works are written for his own ensemble, the Michael Nyman Band, a group formed for a 1976 production of Carlo Goldoni's Il Campiello. Originally made up of old instruments such as rebecs and shawms alongside more modern instruments like the saxophone to produce as loud a sound as possible without amplification, it later switched to a fully amplified line-up of string quartet, three saxophones, trumpet, horn, bass trombone, bass guitar and piano. This line up has been variously altered and augmented for some works.

Nyman also published an influential book in 1974 on experimental music called Experimental Music: Cage and Beyond, which explored the influence of John Cage on classical composers.

In the 1970s, Nyman was a member of the Portsmouth Sinfonia – the self-described World's Worst Orchestra – playing on their recordings and in their concerts. He was the featured pianist on the orchestra's recording of Bridge Over Troubled Water on the Martin Lewis-produced 20 Classic Rock Classics album on which the Sinfonia gave their unique interpretations of the pop and rock repertoire of the 1950s–1970s. Nyman created a similar group called Foster's Social Orchestra, which specialised in the work of Stephen Foster. One of their pieces appeared in the film Ravenous and an additional work, not used in the film, appeared on the soundtrack album.

He has also recorded pop music with the Flying Lizards; a version of his Bird List from the soundtrack to Peter Greenaway's The Falls (1980) appears on their album Fourth Wall as "Hands 2 Take".

On 7 July 2007, Nyman performed at Live Earth in Japan. Nyman also began a long-term artistic collaboration with the filmmaker Max Pugh which has resulted in many short art films, three experimental feature documentaries and a number of video installations. In 2008 Nyman realised, in collaboration with the cultural association Volumina, Sublime, an artist's book that unified his music with his passion for photography.

In October 2009, Nyman released The Glare , a collaborative collection of songs with David McAlmont, which cast his work in a new light. The album – recorded with the Michael Nyman Band – finds McAlmont putting lyrics based on contemporary news stories to 11 pieces of Nyman music drawn from different phases of his career.

In 2012, he made a soundtrack for film Everyday . Keith H. Yoo in 2012 commissioned Nyman to write a 26 minutes long piano quintet in four movements titled Through the Only Window. It premiered at the gala dinner for his father Yoo Byung-eun's photographic exhibition "Through My Window" in the Tuileries Garden of The Louvre in Paris on 25 June 2012. The work has been recorded by Nyman Quintet in the Abbey Road Studios, and has been released on Nyman's record label. [9] [10] [11] In 2013 Nyman was again commissioned to compose a piece for Yoo Byung-eun's exhibition in the Orangerie Hall of the Palace of Versailles, and wrote the 32 minutes long symphony in four movements, Symphony No. 6 "AHAE", representing the four seasons in nature as depicted by Ahae, a pseudonym for Yoo Byung-eun. The London Symphony Orchestra premiered both pieces at L'Opéra of the Palace of Versailles in Paris on 8 September 2013 under the baton of the composer. [12] It has been recorded for a planned future release. [13] [14] [15]

He was married to Aet Nyman and has two daughters, Molly and Martha. His first string quartet quotes "Unchained Melody" in homage to Aet, who appears in Greenaway's The Falls , for which he also composed music. Molly is also a composer and in collaboration with Harry Escott has written several film scores including for The Road to Guantanamo by her father's frequent collaborator, Michael Winterbottom. Martha is a development researcher for the BBC.

Nyman was appointed Commander of the Order of the British Empire (CBE) in the 2008 Birthday Honours. [18]

In 2015, he was awarded the Golden Duke for Lifetime Achievement, the special award of the 6th Odessa International Film Festival. [20]

In addition to his composing and ﬁlm-making activities, Nyman has a full international touring schedule with the Michael Nyman Band as well as a series of unique one-off performances with a variety of collaborators. They include musicians from outside the western/classical/experimental traditions such as the Orquesta Andalusí de Tetuan, Rajan and Sajan Misra, U. Shrinivas, Estrella Morente, Seijin Noborakawa, Ute Lemper, Evan Parker, Peter Brotzmann, Paolo Fresu, Mike Giles, The Flying Lizards, Dagmar Krause, Sting, Damon Albarn, David McAlmont and Alva Noto. [23] 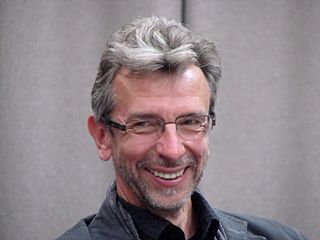 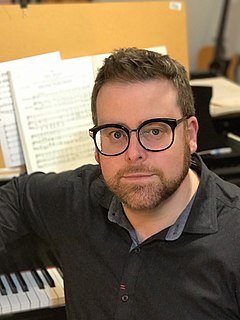 Michael Matthews is a Canadian music composer from Gander, Newfoundland. He has lived in Canada since 1985.

Sebastian Fagerlund is a Finnish composer. He is described as “a post-modern impressionist whose sound landscapes can be heard as ecstatic nature images which, however, are always inner images, landscapes of the mind”. Echoes of Western culture, Orienta l music and heavy metal may, for example, all be detected under the same Sky in the music of Fagerlund.