In comedy, a throwaway line (also: throwaway joke or throwaway gag) is a joke delivered "in passing" without being the punch line to a comedy routine, part of the build up to another joke, or (in the context of drama) there to advance a story or develop a character. Throwaway lines are often one-liners, or in-jokes, and often delivered in a deadpan manner.

In episodic fiction, a line intended originally as a throwaway line in one episode may later be retconned by being incorporated into the back-story of the main drama, and used to develop the longer-term plot. As an example, in the second season of Breaking Bad the character Saul Goodman, threatened at gunpoint by a masked Walter White and Jesse Pinkman, makes assumptions about his kidnapping and tries to defuse the situation by blaming a person named Ignacio and referencing someone named Lalo - who are never mentioned again in the series; despite this, Ignacio Varga and Lalo Salamanca were later written into full-fledged characters in the spin-off/prequel series Better Call Saul , produced several years later.

A comic strip is a sequence of drawings, often cartoon, arranged in interrelated panels to display brief humor or form a narrative, often serialized, with text in balloons and captions. Traditionally, throughout the 20th and into the 21st century, these have been published in newspapers and magazines, with daily horizontal strips printed in black-and-white in newspapers, while Sunday papers offered longer sequences in special color comics sections. With the advent of the internet, online comic strips began to appear as webcomics.

Stand-up comedy is a comedy performance and narrative craft whereby a comedian communicates to a live audience, speaking directly to them through a microphone. The performer is commonly known as a comic, stand-up comic, comedian, comedienne, stand-up comedian, or simply a stand-up. Stand-up comedy is a dialogic monologue, or a grouping of humorous stories, jokes, and one-liners, typically called a shtick, routine, act, or set. Stand-ups may fuse props, music, magic tricks, or ventriloquism. Stand-up comedians perform quasi-autobiographical and fictionalized extensions of their offstage selves.

A running gag, or running joke, is a literary device that takes the form of an amusing joke or a comical reference and appears repeatedly throughout a work of literature or other form of storytelling. Though they are similar, catchphrases are not considered running gags.

Mac Hall is a webcomic which was created through a bet between the creator Ian McConville and a friend who claimed he "couldn't make a comic like Penny Arcade". After the fifteenth comic, McConville was joined by Matt Boyd who began to write the comic.

Cheeky Weekly was a British comic book magazine published every Monday by IPC Magazines Ltd. It ran for 117 issues from 22 October 1977 to 2 February 1980, failing to be published for 3 weeks in December 1978 due to an industrial dispute. It merged with stable-mate Whoopee!, initially as a 16-page pull-out section. The title character originated in an earlier comic called Krazy as a character in the strip The Krazy Gang and also the star of the 'Ello, It's Cheeky feature, and proved popular enough to get his own comic, which managed to outlive Krazy itself. The first issue came with a free "Red Jet Rattler". Its characters and strips included:

A gag character is usually a character that is rarely used, and shows no personality except for the joke in comic strips and TV shows. Often, a gag character's usage is for only one joke.

A double act is a form of comedy originating in the British music hall tradition, and American vaudeville, in which two comedians perform together as a single act. Pairings are typically long-term, in some cases for the artists' entire careers. Double acts perform on the stage, television and film.

Alan Ford is an Italian comic book created by Max Bunker and Magnus, in print since 1969. The comic book is a satirical take on classic secret agents laden with surreal and black humour, and sardonic references to aspects of the contemporary Italian and Western society.

Yonkoma manga, a comic strip format, generally consists of gag comic strips within four panels of equal size ordered from top to bottom. They also sometimes run right-to-left horizontally or use a hybrid 2×2 style, depending on the layout requirements of the publication in which they appear. Although the word yonkoma comes from Japanese, the style also exists outside Japan in other Asian countries as well as in the English-speaking market.

A gag cartoon is most often a single-panel cartoon, usually including a caption beneath the drawing. A pantomime cartoon carries no caption. In some cases, dialogue may appear in speech balloons, following the common convention of comic strips.

The Sunday comics or Sunday strip is the comic strip section carried in most western newspapers, almost always in color. Many newspaper readers called this section the Sunday funnies, the funny papers or simply the funnies. 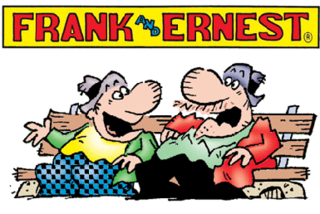 Better Call Saul is an American crime drama television series created by Vince Gilligan and Peter Gould. It is both a spin-off and a prequel of Gilligan's previous series, Breaking Bad. Set in the early to mid-2000s in Albuquerque, New Mexico, the series develops Jimmy McGill, an earnest lawyer and former con-man, into a greedy criminal defense attorney known as Saul Goodman. Also shown is the moral decline of retired police officer Mike Ehrmantraut, who becomes closely affiliated with the Juarez drug cartel to support his daughter-in-law and her daughter after his son is killed. Jimmy and Mike's interactions remain sporadic until their respective storylines fully converge. The show premiered on AMC on February 8, 2015, airing five seasons to date. A sixth and final season, consisting of 13 episodes, is set to premiere in early 2022.

Cowboy Henk is a Belgian absurd humor/surreal humour gag-a-day comic strip series, drawn by Herr Seele and written by Kamagurka. It was originally published in the newspaper De Morgen, but later taken over by the magazine HUMO in which it is still published today and for whom Henk is now their mascot. The series was in continuous syndication from 1981 until 2011. After the brief interruption it was continued again in the spring of 2013.

Comics has developed specialized terminology. Some several attempts have been made to formalize and define the terminology of comics by authors such as Will Eisner, Scott McCloud, R. C. Harvey and Dylan Horrocks. Much of the terminology in English is under dispute, so this page will list and describe the most common terms used in comics.

"Better Call Saul" is the eighth episode of the second season of the American television drama series Breaking Bad. It was written by Peter Gould and directed by Terry McDonough.

Ignacio Varga is a fictional character who appears in the AMC television series Better Call Saul, a prequel spin-off of Breaking Bad. He is portrayed by Michael Mando and was created by Vince Gilligan and Peter Gould.

A gag-a-day comic strip is the style of writing comic cartoons such that every installment of a strip delivers a complete joke or some other kind of artistic statement. It is opposed to story or continuity strips, which rely on the development of a story line across a sequence of the installments. Most syndicated comics are of this type. Another term for this distinction is non-serial (gag-a-day) vs. serial strips.

"Loss", sometimes referred to as "Loss.jpg", is a webcomic strip created on June 2, 2008 by Tim Buckley for his gaming-related webcomic Ctrl+Alt+Del. During a storyline where the main character Ethan and his fiancée Lilah are expecting their first child, the strip—presented as a four-panel comic with no dialogue—has Ethan entering a hospital, asking a receptionist for directions, talking to a doctor, and finding Lilah crying on her side in a hospital bed, implying that she had suffered a miscarriage. Buckley cited personal events in his life as inspiration for the comic.

Eduardo "Lalo" Salamanca is a fictional character on the AMC television series Better Call Saul, a prequel of Breaking Bad. Introduced in the fourth season, he is portrayed by Tony Dalton and was created by Vince Gilligan, Peter Gould and Gordon Smith.