Last updated March 04, 2021
This article is about the literary device. For "back-stories" of consumer goods, see Back-story (production). For other uses, see Back Story (disambiguation).

A backstory, background story , back-story, or background is a set of events invented for a plot, presented as preceding and leading up to that plot. It is a literary device of a narrative history all chronologically earlier than the narrative of primary interest.

In acting, it is the history of the character before the drama begins, and is created during the actor's preparation.

It is the history of characters and other elements that underlie the situation existing at the main narrative's start. Even a purely historical work selectively reveals backstory to the audience. [1] [2]

As a literary device, backstory is often employed to lend depth or believability to the main story. The usefulness of having a dramatic revelation was recognized by Aristotle, in Poetics.

Backstories are usually revealed, partially or in full, chronologically or otherwise, as the main narrative unfolds. However, a story creator may also create portions of a backstory or even an entire backstory that is solely for their own use. [3]

Backstory may be revealed by various means, including flashbacks, dialogue, direct narration, summary, recollection, and exposition. The original Star Wars movie and its first two sequels are examples of a work with a preconceived backstory, which was later released as the "prequel" second set of three movies.

For example, Orson Scott Card observes that "If it's a memory the character could have called to mind at any point, having her think about it just in time to make a key decision may seem like an implausible coincidence . . . ." Furthermore, "If the memory is going to prompt a present decision, then the memory in turn must have been prompted by a recent event." [4]

In a shared universe more than one author may shape the same backstory. The later creation of a backstory that conflicts with a previously written main story may require the adjustment device known as retroactive continuity, informally known as "retcon".

Actors may create their own backstories for characters, going beyond the sometimes meager information in a script. Filling in details helps an actor interpret the script and create fully imagined characters. [5] 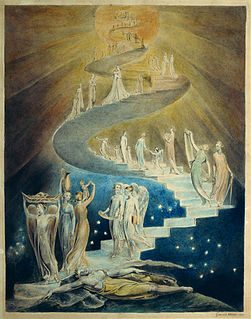 A prequel is a literary, dramatic or cinematic work whose story precedes that of a previous work, by focusing on events that occur before the original narrative. A prequel is a work that forms part of a backstory to the preceding work.

Foreshadowing is a literary device in which a writer gives an advance hint of what is to come later in the story. Foreshadowing often appears at the beginning of a story, or a chapter, and it helps the reader develop expectations about the upcoming events.

Narrative exposition is the insertion of background information within a story or narrative. This information can be about the setting, characters' backstories, prior plot events, historical context, etc. In literature, exposition appears in the form of expository writing embedded within the narrative. Exposition is one of four rhetorical modes, along with description, persuasion, and narration, as elucidated by Alexander Bain and John Genung.

Narrative structure is a literary element generally described as the structural framework that underlies the order and manner in which a narrative is presented to a reader, listener, or viewer. The narrative text structures are the plot and the setting.

A frame story is a literary technique that serves as a companion piece to a story within a story, where an introductory or main narrative sets the stage either for a more emphasized second narrative or for a set of shorter stories. The frame story leads readers from a first story into one or more other stories within it. The frame story may also be used to inform readers about aspects of the secondary narrative(s) that may otherwise be hard to understand. This should not be confused with narrative structure or character personality change.

A flashback is an interjected scene that takes the narrative back in time from the current point in the story. Flashbacks are often used to recount events that happened before the story's primary sequence of events to fill in crucial backstory. In the opposite direction, a flashforward reveals events that will occur in the future. Both flashback and flashforward are used to cohere a story, develop a character, or add structure to the narrative. In literature, internal analepsis is a flashback to an earlier point in the narrative; external analepsis is a flashback to a time before the narrative started.

Nonlinear narrative, disjointed narrative or disrupted narrative is a narrative technique, sometimes used in literature, film, hypertext websites and other narratives, where events are portrayed, for example, out of chronological order or in other ways where the narrative does not follow the direct causality pattern of the events featured, such as parallel distinctive plot lines, dream immersions or narrating another story inside the main plot-line. Most of the time, it is used to mimic the structure and recall of a character, but has been used for other reasons as well.

A setting is the time and geographic location within a narrative, either nonfiction or fiction. It is a literary element. The setting initiates the main backdrop and mood for a story. The setting can be referred to as story world or milieu to include a context beyond the immediate surroundings of the story. Elements of setting may include culture, historical period, geography, and hour. Along with the plot, character, theme, and style, setting is considered one of the fundamental components of fiction.

Orson Scott Card is an American writer known best for his science fiction works. His novel Ender's Game (1985) and its sequel Speaker for the Dead (1986) won both the Hugo Award and the Nebula Award. A feature film adaptation of Ender's Game, which Card co-produced, was released in 2013. Card also wrote the Locus Fantasy Award-winning series The Tales of Alvin Maker (1987–2003).

In literature and other artistic media, a mode is an unspecific critical term usually designating a broad but identifiable kind of literary method, mood, or manner that is not tied exclusively to a particular form or genre. Examples are the satiric mode, the ironic, the comic, the pastoral, and the didactic.

A fiction-writing mode is a manner of writing with its own set of conventions regarding how, when, and where it should be used.

"A Sleep and a Forgetting" is a short story by Orson Scott Card. It only appears in his short story collection Capitol.

Hamlet's Father is a 2008 novella by Orson Scott Card, which retells the story of Shakespeare's Hamlet in modernist prose, and which makes several changes to the characters' motivations and backstory. It has drawn substantial criticism for its portrayal of King Hamlet as a pedophile who molested Laertes, Horatio, and Rosencrantz and Guildenstern, and implication that this in turn made them homosexuals. 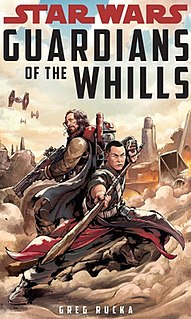 The Guardians of the Whills are a faction in the fictional universe of the Star Wars franchise. The Guardians are depicted as an organization of ascetics who revere the Force, a metaphysical concept in the Star Wars fictional universe, though unlike the Jedi or the Sith, they do not appear to wield overtly supernatural powers derived from their connection to the Force.