Throy is a 1992 science fiction novel by American writer Jack Vance, the final work in the Cadwal Chronicles, a trilogy set in Vance's Gaean Reach. The preceding novels are Araminta Station and Ecce and Old Earth .

John Holbrook "Jack" Vance was an American mystery, fantasy, and science fiction writer. Though most of his work has been published under the name Jack Vance, he also wrote 9 mystery novels using his full name John Holbrook Vance, three under the pseudonym Ellery Queen, and one each using the pseudonyms Alan Wade, Peter Held, John van See, and Jay Kavanse. Some editions of his published works give his year of birth as 1920.

The Cadwal Chronicles are a trilogy of science fiction novels by American writer Jack Vance set in his Gaean Reach fictional universe. The three novels are called Araminta Station (1987), Ecce and Old Earth (1991) and Throy (1992).

By this point, Bureau B has identified the two factions seeking to overthrow the Conservancy that protects and administers the nearly unspoiled planet Cadwal. Smonny Clattuc controls the Yips through her compliant husband, Titus Pompo. By chance, Titus resembles Calyactus, the former Yip leader. Calyactus was disposed of and replaced by Titus. Smonny seeks vengeance for having to leave Cadwal, even though it was her own laziness that caused her to fail to achieve Agency status. The other faction is the Life, Peace and Freedom party (LPF), led by Dame Clytie Vergence. Initially the LPFers idealistically sought to free the Yips from their sorry state, but now their goal is to create large country estates for themselves, keeping some of the Yips as servants.

Egon Tamm, the Conservator, announces that the old Charter governing Cadwal has been superseded by a new, somewhat stricter one. However, Bureau B is under no illusions that the danger has been averted. Glawen Clattuc is sent off-world with Eustace Chilke to feel out Lewyn Barduys, a construction magnate who had been seen talking with Dame Clytie. Bureau B fears that Barduys will be persuaded to provide enough transportation for the Yips to burst out of their severely overcrowded atoll and overwhelm the Conservancy with their vastly greater numbers.

When Glawen finally tracks Barduys down, he and Chilke arrive just in time to save the man's life. Barduys had had unsatisfactory business dealings with Namour Clattuc, Smonny's lieutenant and lover. Namour decided the best way to deal with the matter was to shoot Barduys. After Barduys recovers, he has strong reasons to aid Glawen and the Conservancy. He arranges for a face-to-face summit meeting with Smonny and Dame Clytie, supposedly to settle the details of their plan. The two women have very different goals and ideas of who is to be in overall charge, and soon come to furious blows.

As a result, Smonny sends Yips with demolition charges to send the settlement of Stroma crashing into the fjord below. Dame Clytie and the rest of the LPF leadership were not at home, but their families and their ancient homes have been wiped out. Thirsting for revenge, they attack Yipton with their two gunships, killing most of the Yips.

The LPFers are caught while trying to leave the planet, and are sentenced to death. Smonny, Namour and Spanchetta Clattuc (guilty of harboring the other two and also of having Glawen's mother murdered many years before) are also found. The trio are marooned in Smonny's own isolated compound on the dangerous, uninhabited continent of Ecce. Barduys resettles the surviving Yips on another planet, finally ending the threat to the Conservancy.

Planet of Adventure is a series of four science fiction novels by Jack Vance, which relate the adventures of the scout Adam Reith, the sole survivor of an Earth ship investigating a signal from the distant planet Tschai.

Planetary romance is a subgenre of science fiction or science fantasy in which the bulk of the action consists of adventures on one or more exotic alien planets, characterized by distinctive physical and cultural backgrounds. Some planetary romances take place against the background of a future culture where travel between worlds by spaceship is commonplace; others, particularly the earliest examples of the genre, do not, and invoke flying carpets, astral projection, or other methods of getting between planets. In either case, it is the planetside adventures which are the focus of the story, not the mode of travel.

The Gaean Reach is a fictional region in space that is a setting for some science fiction by Jack Vance. All of his series and standalone works that are set in a universe evidently including the Gaean Reach, perhaps set inside it or outside it, have been catalogued as the Gaean Reach series or super-series.

Space Opera is a novel by the American science fiction author Jack Vance, first published in 1965.

Terraforming is well represented in popular culture, usually in the form of science fiction. While many stories involving interstellar travel feature planets already suited to habitation by humans and supporting their own indigenous life, some authors prefer to address the unlikeliness of such a concept by instead detailing the means by which humans have converted inhospitable worlds to ones capable of supporting life through artificial means. 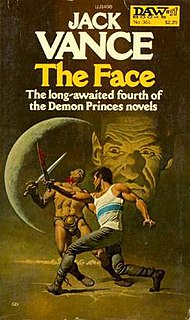 The Face is a science fiction novel by American writer Jack Vance, the fourth novel (1979) in the "Demon Princes" series. It was published nearly twelve years after the third.

Showboat World is a science fiction novel by American writer Jack Vance, first published in 1975. It is the second, stand-alone novel in a pair of novels that share the same setting, a backward, lawless, metal-poor world called Big Planet. The plot structure which involves a series of dramatic presentations, often with humorous consequences, has parallels with Vance's 1965 novel Space Opera.

City of the Chasch is a science fiction novel by American writer Jack Vance, the first in the adventure tetralogy Planet of Adventure. It follows the attempts of a man stranded on the distant planet Tschai to return to Earth.

Servants of the Wankh is a science fiction adventure novel by American writer Jack Vance, the secondh in the tetralogy Tschai, Planet of Adventure. It tells of the efforts of the sole survivor of a human starship destroyed by an unknown enemy to return to Earth from the distant planet Tschai.

The Ganymede Takeover is a 1967 science fiction novel by American writers Philip K. Dick and Ray Nelson. It is an alien invasion novel, and similar to Dick's earlier solo novel The Game-Players of Titan. Dick later admitted that The Ganymede Takeover was originally going to be a sequel to his alternate history novel The Man in the High Castle with the Japanese occupying the United States not Ganymede.

The Gray Prince is a science fiction novel by Jack Vance, first published in two parts in Amazing Science Fiction magazine with the title The Domains of Koryphon. Given that the novel's setting, the planet Koryphon, is integral to the plot, The Gray Prince may be said to belong to the science fiction subgenre of the planetary romance. Also significant in this regard is the work's original title, The Domains of Koryphon, which gives prominence to the setting of the conflict narrated in the novel rather than to one of its many characters. 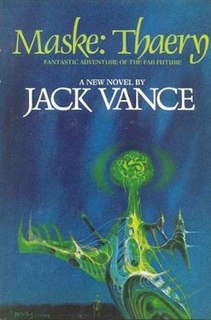 Maske: Thaery is a science fiction novel by American writer Jack Vance, set in his Gaean Reach milieu, which was first published as a paperback by Berkley Books, the science-fiction imprint of Putnam, in 1976. Maske: Thaery marks the beginning of the period when Vance's novels were published exclusively straight to paperback, whereas prior to this the majority had first appeared in science fiction magazines, the last such examples being Durdane trilogy, serialised in The Magazine of Fantasy & Science Fiction from 1971 to 1973, The Gray Prince, serialised in Amazing Science Fiction in 1974, and Marune: Alastor 933, also serialised in Amazing Science Fiction in 1974. The twofold title of Maske: Thaery, with its separating colon, would suggest that it was originally intended to be part of a serial, similar to the Alastor novels, although no further volumes were written: instead, Vance completed his Demon Princes series, after a hiatus of more than a decade, with The Face (1979) and The Book of Dreams (1981), before embarking on his Lyonesse trilogy (1983–89). Maske: Thaery continues Vance's interest in richly textured, strongly xenological settings, in which an outsider protagonist comes into conflict with a bewilderingly complex social hierarchy, other examples being Emphyrio (1969) and the Durdane trilogy. Like many of Vance's novels of the 1960s and '70s, the narrative of Maske: Thaery might be described as a bildungsroman.

Underwood–Miller Inc. was a science fiction and fantasy small press specialty publishing house in San Francisco, California, founded in 1976. It was founded by Tim Underwood, a San Francisco book and art dealer, and Chuck Miller, a Pennsylvania used book dealer, after the two had met at a convention.

Araminta Station is a science fiction novel by American writer Jack Vance. It is the first part of the Cadwal Chronicles, a trilogy set in the Gaean Reach, the other two novels being Ecce and Old Earth and Throy.

Marune: Alastor 933 (1975) is a science fiction novel by Jack Vance, the second of three books set in the Alastor Cluster, ‘a whorl of thirty thousand stars in an irregular volume twenty to thirty light-years in diameter’. Three thousand of the star systems are inhabited by five trillion humans, ruled by the mostly hands-off, laissez-faire Connatic, who occasionally, in the manner of Harun al-Rashid of The Thousand and One Nights, goes among his people in disguise. The novel was preceded by Trullion: Alastor 2262 (1973) and followed by Wyst: Alastor 1716 (1978).

Allegiant is a science fiction novel for young adults, written by the American author Veronica Roth and published by HarperCollins in October 2013. It completes the Divergent trilogy that Roth started with her debut novel Divergent in 2011. The book is written from the perspective of both Beatrice (Tris) and Tobias (Four). Following the revelations of the previous novel, they journey past the city's boundaries to discover what lies beyond.