Thud Ridge is a 1969 memoir by Jack Broughton about flying the F-105 "Thud" for the United States Air Force in the Vietnam War during Operation Rolling Thunder. The title Thud Ridge derives from the nickname given by F-105 pilots to the Tam Dao range, which was both a waypoint during air attacks in the vicinity of Hanoi, North Vietnam, and a terrain masking feature for ingressing fighters. [1]

The book set a style that was followed over the next several decades by a spate of gritty memoirs by air veterans of the Vietnam War. Broughton's book is unique to the extent that it was described as "history in the making" by Hanson W. Baldwin of the New York Times . [1]

The book is based on Broughton's tour of duty between September 1966 and June 1967 as Vice Commander of the 355th Tactical Fighter Wing, based at Takhli Royal Thai Air Force Base, Thailand. The narrative is anecdotal in nature, a commentary of his observations of persons, aircraft, and events during his tour, more or less chronologically, but without dated references. Few individuals are identified by other than first or nicknames, but Broughton develops most as characters through descriptions of their career backgrounds. Broughton's accounts of missions "up north" were enhanced in both accuracy and verisimilitude by verbatim transcriptions of radio transmissions he recorded using a small tape recorder mounted in the cockpit of his aircraft. [2]

In Thud Ridge Broughton is highly critical of the U.S. command structure directing air operations against North Vietnam. He blames micromanagement by the highest levels in Washington down to the Thirteenth Air Force, a command echelon based in the Philippines, for losses of men and aircraft that he characterizes as "astronomical" and "worthless." He is particularly critical, however, of the "bomber mentality" management by generals who came up through the Strategic Air Command and then occupied key command slots in the war, which was being fought by pilots of the Tactical Air Command. [3]

The book came about when, at the completion of his tour of duty, Broughton and two of his pilots were court martialed by the USAF for allegedly conspiring to violate the rules of engagement regarding U.S. air operations. Although acquitted of the most serious charges, Broughton, who had been personally relieved of duty by Pacific Air Forces commander Gen. John D. Ryan, was subsequently transferred to an obscure post in the Pentagon, [4] allegedly as a vendetta because his punishment was so slight. Required by office protocol to work only two or three days a month, he used both his extra time and his bitterness at the Air Force to compose Thud Ridge while he awaited approval of an application to appeal of his conviction to the Air Force Board for Correction of Military Records. [5]

After his conviction was overturned and expunged from his record because of "undue command influence," Broughton retired from the Air Force in August 1968 and had the memoir published by J. B. Lippincott. [5] The book appeared soon after as a Bantam paperback, with reprint editions in 1985, 2002, and 2006.

Broughton's book brought him into immediate disfavor with the Air Force hierarchy. However, thirty years after the incident resulting in the court martial, U.S. Air Force Chief of Staff General Ronald R. Fogleman added Thud Ridge to the CSAF Professional Reading Program he instituted in 1996 and directed the Air Force to purchase 10,000 copies. Along with 12 other books on the reading list, Thud Ridge was provided at no expense to all Air Force officers upon their promotion to captain. [6] 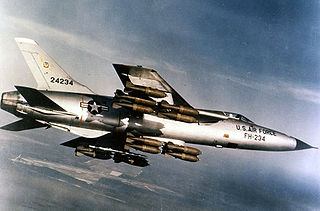 The Republic F-105 Thunderchief was an American supersonic fighter-bomber used by the United States Air Force. Capable of Mach 2, it conducted the majority of strike bombing missions during the early years of the Vietnam War; it was the only American aircraft to have been removed from combat due to high loss rates. Originally designed as a single-seat, nuclear-attack aircraft, a two-seat Wild Weasel version was later developed for the specialized Suppression of Enemy Air Defenses (SEAD) role against surface-to-air missile sites. The F-105 was commonly known as the "Thud" by its crews. 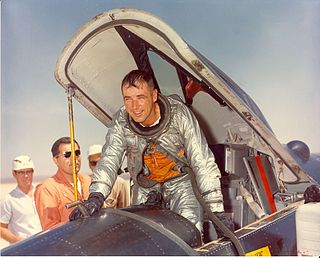 Robert Michael "Bob" White was an American electrical engineer, test pilot, fighter pilot, and astronaut. He was one of twelve pilots who flew the North American X-15, an experimental spaceplane jointly operated by the Air Force and NASA. As an engineer, he supervised the design and development of several modern military aircraft.

The 116th Air Control Wing is a Wing of the Georgia Air National Guard/United States Air Force, stationed at Robins Air Force Base, Georgia. If activated for federal service, the wing is gained by Air Combat Command. 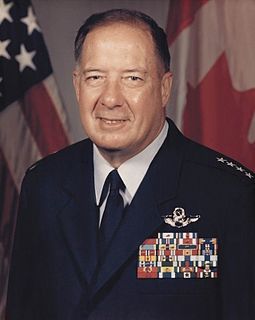 Charles Albert "Chuck" Horner is a retired USAF Four-Star General. He was born in Davenport, Iowa and attended the University of Iowa, as part of the Air Force ROTC program. On June 13, 1958, Horner was commissioned into the Air Force Reserve. During the Vietnam War, he flew in combat as a Wild Weasel pilot and received the Silver Star. During Operation Desert Shield and Operation Desert Storm, he commanded the American aerial forces, as well as those of the American allies. During the Desert Shield phase of the conflict, Horner briefly served as Commander-in-Chief — Forward of U.S. Central Command; while General Schwarzkopf was still in the United States. He currently serves on the board of directors for the US Institute of Peace.

The 561st Fighter Squadron is an inactive United States Air Force squadron, being last assigned to the 57th Operations Group at Nellis Air Force Base, Nevada. It was inactivated on 1 October 1996. The squadron was the last United States Air Force unit to fly the McDonnell F-4 Phantom II on operational missions. The last Republic F-105 Thunderchief shot down in the Vietnam War was from the 561st. 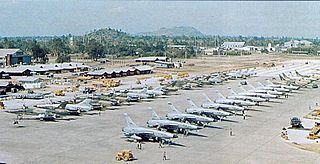 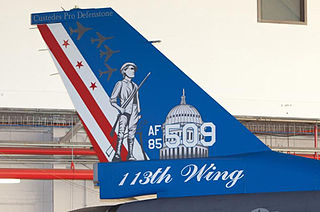 The 113th Wing, known as the "Capital Guardians", is a unit of the District of Columbia Air National Guard, stationed at Joint Base Andrews, Maryland. If activated to federal service, the fighter portion of the Wing is gained by the United States Air Force's Air Combat Command, while the airlift portion is gained by Air Mobility Command. 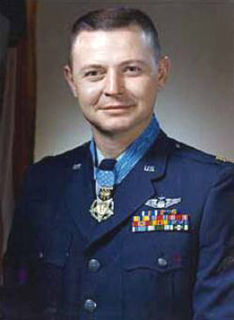 Merlyn Hans Dethlefsen was a United States Air Force officer and a recipient of the United States military's highest decoration—the Medal of Honor—for his actions in the Vietnam War. 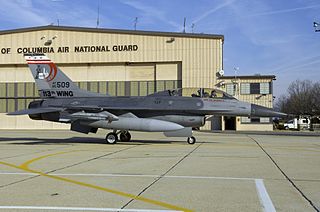 The 121st Fighter Squadron is a unit of the District of Columbia Air National Guard 113th Wing located at Joint Base Andrews, Camp Springs, Maryland. The 121st is equipped with the Block 30 F-16C/D Fighting Falcon. 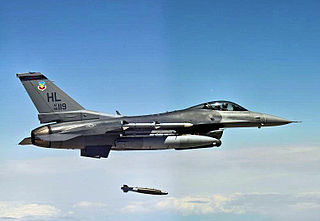 The 421st Fighter Squadron is part of the 388th Fighter Wing at Hill Air Force Base, Utah. It operates the Lockheed Martin F-35A aircraft conducting air superiority missions. The squadron is one of the most decorated fighter squadrons in the United States Air Force, being awarded three Presidential Unit Citations and seven Air Force Outstanding Unit Awards for Valor in Combat.

The 835th Air Division is an inactive United States Air Force (USAF) organization. Its last assignment was to Twelfth Air Force of Tactical Air Command (TAC) at McConnell Air Force Base, Kansas, where it was inactivated on 30 June 1971. 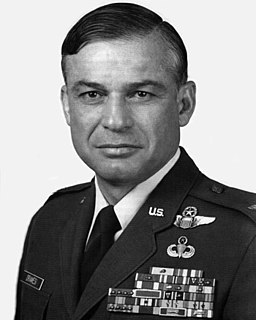 John Arthur Dramesi was a retired United States Air Force (USAF) Colonel who was held as a prisoner of war from 2 April 1967 to 4 March 1973 in both Hoa Lo Prison, known as "The Hanoi Hilton", and Cu Loc Prison, "The Zoo", during the Vietnam War.

Kenneth Walter North was a Brigadier General in the United States Air Force as well as a prisoner of war during the Vietnam War. After his release, he commanded various units and was eventually promoted to general in 1982. 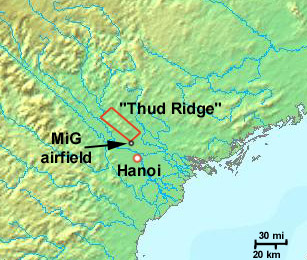 Thud Ridge was the nickname given by United States Air Force F-105 Thunderchief pilots during the Vietnam War to the Tam Dao range a 24 km, 5000 ft high ridge that ran parallel to the Red River approximately 32 km northwest of Hanoi, which was both a waypoint during air attacks and a terrain masking feature for ingressing fighters in the vicinity of Hanoi, North Vietnam.