Thumb Peak is a small mountain in central Palawan, Philippines, and is the highest point in the Thumb Range. Like Mount Mantalingahan and Mount Victoria further south, Thumb Peak is part of the Mount Beaufort Ultramafics geological area, a series of ultramafic outcrops of Eocene origin that emerge in various parts of the island. [1]

The mountain was formerly known as Mount Pulgar, a name it acquired during the Spanish Colonial period. Pulgar, means thumb in Spanish, and the name was probably translated directly to English following the ousting of Spain during the Spanish–American War. The name may have arisen as a result of the mountain's profile, which vaguely resembles the tip of a thumb protruding from a clenched fist.

The upper reaches of Thumb Peak are populated by species associated with ultramafic soils, including a number of endemics, such as the tropical pitcher plant Nepenthes deaniana , rediscovered on the mountain in 2007 for the first time since its description in 1908. [2] [3]

Thumb Peak is accessible from the Iwahig Penal Colony as a 2–3 day hike, graded Difficulty 7/9 by local mountaineering website PinoyMountaineer.com. Highlights of the trail include river crossings, trekking through dense forests, and beautiful views at the summit. A permit is required to climb the mountain. [4] 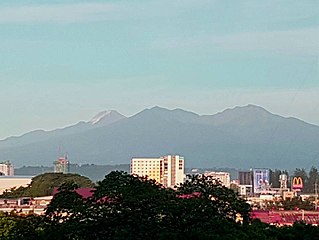 Mount Apo, also known locally as Apo Sandawa, is a large solfataric, dormant stratovolcano on the island of Mindanao, Philippines. With an elevation of 2,954 meters (9,692 ft) above sea level, it is the highest mountain in the Philippine Archipelago and is located between Davao City and Davao del Sur province in Region XI and Cotabato in Region XII. The peak overlooks Davao City 45 kilometers (28 mi) to the northeast, Digos 25 kilometers (16 mi) to the southeast, and Kidapawan 20 kilometers (12 mi) to the west. Mount Apo is a protected area and a Natural Park of the Philippines. 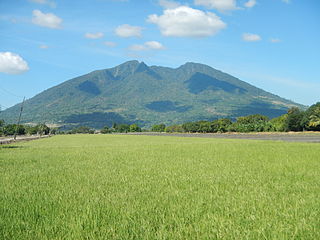 Mount Arayat is a potentially active or a dormant stratovolcano located in the province of Pampanga on the island of Luzon, Philippines, rising to a height of 1,026 metres (3,366 ft). The volcano has a breached crater on its northwest side with a smaller andesitic dome in the collapse amphitheater. There are no historical records of eruption in Arayat and the only dated rocks are 530- and 650-thousand-year-old basalts predating the collapse and formation of the lava dome. An analysis report indicates that the volcano erupted over the last 2,000 years, but it is believed to refer to the volcanic activity of the volcano. The Mount Arayat National Park was established in 1933.

Mount Guiting-Guiting is the highest mountain in the province of Romblon located at the heart of Sibuyan Island and dominates the entire island. Guiting-Guiting, in the local Romblomanon dialect, means "jagged". The mountain is one of the focal points of Sibuyan's declaration as a biodiversity haven. The entire island has been compared numerous times with the biodiversity endemism rate of the Galapagos islands. This endemism prompted much of the mountain and its slopes to be protected under the Mt. Guiting-Guiting Natural Park, established in 1996. The park also encompasses nearby Mt. Nailog to the west.

Mount Banahaw is a active volcano on Luzon in the Philippines. The three-peaked volcano complex is located at the boundary of Laguna and Quezon provinces. It is the highest mountain in the Calabarzon region, dominating the landscape for miles around.

Nepenthes philippinensis is a tropical pitcher plant endemic to the Philippines. It is known from Palawan and the neighbouring Calamian Islands and Linapacan, where it grows at 0–600 metres (2,000 ft) above sea level.

Nepenthes mira is a highland pitcher plant endemic to Palawan in the Philippines. It grows at elevations of 1550–1605 m above sea level.

Nepenthes deaniana is a tropical pitcher plant endemic to the Philippines, where it grows at an altitude of 1180–1296 m above sea level. The species is known only from the summit region of Thumb Peak, a relatively small, ultramafic mountain in Puerto Princesa Province, Palawan.

Nepenthes mantalingajanensis is a tropical pitcher plant known only from the summit region of Mount Mantalingajan, the highest point on the Philippine island of Palawan, after which it is named.

Mount Victoria, or Victoria Peaks, is a mountain in central Palawan, Philippines, that lies within the administrative Municipality of Narra. The mountain, which includes the twin peaks known as "The Teeth", as well as the single prominence known as Sagpaw, form the largest contiguous land area and second highest portion of the Mount Beaufort Ultramafics geological region, a series of ultramafic outcrops of Eocene origin, that includes Palawan's highest peak, Mount Mantalingahan.

Nepenthes peltata is a tropical pitcher plant known only from the upper slopes of Mount Hamiguitan on the island of Mindanao in the Philippines. It is characterised by a peltate tendril attachment and conspicuous indumentum. The species typically produces ovoid pitchers with a prominent basal crest and large nectar glands on the lower surface of the lid. 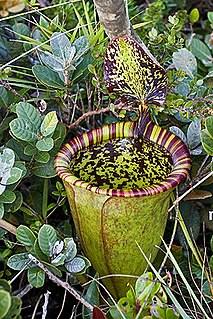 Nepenthes attenboroughii, or Attenborough's pitcher plant, is a montane species of carnivorous pitcher plant of the genus Nepenthes. It is named after the celebrated broadcaster and naturalist Sir David Attenborough, who is a keen enthusiast of the genus. The species is characterised by its large and distinctive bell-shaped lower and upper pitchers and narrow, upright lid. The type specimen of N. attenboroughii was collected on the summit of Mount Victoria, an ultramafic mountain in central Palawan, the Philippines. 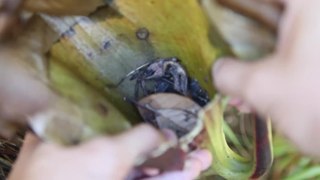 Alastair S. Robinson is a taxonomist and field botanist specialising in the carnivorous plant genus Nepenthes, for which he is regarded as a world authority. He is currently a manager at the National Herbarium of Victoria, Royal Botanic Gardens Melbourne, where he oversees identification botany services, the Library and Artwork components of the State Botanical Collection, and the botanical journal Muelleria, a peer-reviewed scientific journal on botany published by the Royal Botanic Gardens Victoria, for which he is Editor in Chief.

Nepenthes palawanensis is a tropical pitcher plant endemic to Sultan Peak on the island of Palawan in the Philippines, where it grows at elevations of 1100–1236 m above sea level. It was discovered in February 2010 by Jehson Cervancia and Stewart McPherson.

Nepenthes gantungensis is a tropical pitcher plant known from a single peak on the Philippine island of Palawan, where it grows at elevations of 1600–1784 m above sea level.

Nepenthes hamiguitanensis is a tropical pitcher plant endemic to a single peak on the Philippine island of Mindanao, where it grows at elevations of 1200–1600 m above sea level. Once thought to be a natural hybrid between N. micramphora and N. peltata, this plant is now considered a species of possible hybridogenic origin. It produces squat upper pitchers that vary greatly in pigmentation, from red speckled to yellow throughout. 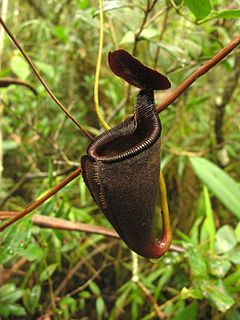 Nepenthes leonardoi is a tropical pitcher plant known from a single locality in central Palawan, the Philippines. It is closely allied to several other Palawan endemics, including N. deaniana, N. gantungensis, and N. mira. The traps of this species reach at least 24 cm in height. Some specimens are noted for producing very dark, almost black, upper pitchers.

Nepenthes ramos is a tropical pitcher plant native to northeastern Mindanao, the Philippines. It is known from only a handful of herbarium specimens collected in 1919 at an elevation of 670 m above sea level. It likely grows in forest on ultramafic soils. 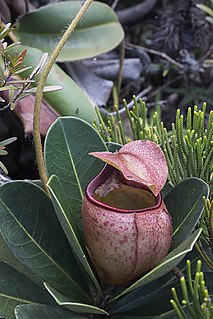 Nepenthes erucoides is an ultramaficolous tropical pitcher plant endemic to Mount Redondo, the highest peak on the Philippine island of Dinagat, where it occurs from c. 800 m to the summit at 929 m. It grows on a very thin substrate consisting of "lateritic nickel ore and decomposed chromite rubble, through to a clay derived thereof", which has been described as the most extreme ultramafic substrate known to host Nepenthes. Its taxonomic affinities are unclear, though it has been noted for its similarities to N. mantalingajanensis from Palawan. The species' ultramaficolous ecological setting has permitted the radiation of a peculiar set of associated traits, those being: "reduced leaf morphologies, sclerophyllous characteristics, hirsuteness and small stature", which have been associated similarly with the diminutive Nepenthes argentii of the windswept, ultramafic peak of Mount Guiting-Guiting, Sibuyan. The authors suggest that morphological analogues in the aforementioned species do not entail genetic association, and as such these may be considered as instances of morphological convergence- derived from associated conditions in ultramaficolous ecology- until further genetic analysis occurs. Nepenthes erucoides co-localizes with N. mindanaoensis and N. bellii. Nepenthes truncata occurs within the extent of the elfin forest below the 800 meter elevation band, N. merrilliana occurring regionally at elevations below 600 meters.