Thunderbolt is a 1910 film in the genre of "outlaw" films at the time that tended to glorify the life of the outlaw "Bushrangers" that roamed the Australian outback in pre-commonwealth days. Shortly after this movie was made, the government of New South Wales banned the manufacture of this type of film on the basis that they were promoting crime. [5]

It was the directorial debut of John Gavin who later claimed it was the first "four-reel movie" made in Australia. [6] [7] It has also been called the first film made in New South Wales. [8]

Unlike most Australian silent films, part of the movie survives today. [9]

Frederick Ward is a cattle drover earning money for his wedding when he is accused of cattle theft and sentenced to seven years at Cockatoo Island. He escapes three years later by swimming across the water only to learn that his fiancée, Jess Anson, has died of grief. He seeks his revenge by taking on a life of crime, becoming the bushranger Captain Thunderbolt.

He befriends some aboriginal people, steals a racehorse, "Combo", and robs the Moonbi Mail Coach. He then enters "Combo" in a horse race and wins. He is rescued from a police trap involving Chinese by a half-caste girl, Sunday. He is grateful to her and they get married. He then holds up the Carlisle Hotel, and narrowly escapes. He takes on a boy apprentice and Sunday dies. Thunderbolt then dies in a shoot out with police on the riverbank at Uralla. [10] [11]

According to contemporary reports, the various chapter headings were: [12]

The film was based on the book Three Years with Thunderbolt by William Mockton and Ambrose Pratt which was published in 1905. [15]

The play was structured as follows: [18]

The play was produced by William Anderson and starred Eugenie Duggan. [19] A cast list from a 1910 production was:

H. A. Forsyth produced the film and adapted Three Years With Thunderbolt into a screenplay. He also appeared in the film as a young bushranger. John Gavin directed and played the lead role.

Because the film was longer than the typical movies of the time Gavin later claimed that "everyone warned him that his venture was doomed to failure". [6]

Shooting took place in Lithgow and Hartley Vale, with extras recruited from local miners who were then on strike. [20] [21]

A film called Thunderbolt, about the bushranger, was screened in Wagga Wagga in February 1910. [22] It is unclear whether this is the Gavin film, which officially premiered in Sydney on 12 November 1910. [23]

The movie was usually screened accompanied by a lecturer. [24]

Reviews were generally positive. One critic wrote that:

The film has been admirably produced, being as clear and as distinct as any yet shown in Australia, and great credit is due to the bio operator, Mr. Moulton... Mr. Jack Gavin made an impressive Thunderbolt, being a fine upstanding man, big-enough to fight Jack Johnson; and Mr. Bert Forsyth was all that could be desired as Monkton, the boy bushranger. Mr. H. A. Forsyth is to be congratulated upon the success of his initial attempt at picture production, and his efforts augur well for his success in future efforts. [25]

The Newcastle Herald stated that:

The various scenes were shown with a clearness that lent realism to the picture, which is one of the best ever thrown on the screen in Newcastle. The outlaw's swim from Cockatoo Island, where he had been imprisoned, was a very fine scene, and his theft of a horse followed by his sticking up of the Moonbi mail coach, in which the antics of the passengers caused amusement, was excellent.... The audience showed appreciation by loud applause, which the picture deserved thoroughly. [26]

The Bunbury Southern Times said that the film "is said to be a masterpiece in motion picture cinematography. This picture is full of exciting and sensational plots." [27]

The film was a big success at the box office, one writer calling it "a boom unprecedented in the annals of local picture showdom." [28] It was so popular, Forsyth indicated he wanted to make further bushranger movies. [29]

Gavin and Forsyth subsequently went on to make a film about Captain Moonlite. Then the two went their separate ways and Gavin made movies on Ben Hall and Frank Gardiner. [6] In advertising Forsyth would claim he was the "original creator" of the films on Thunderbolt and Moonlite, not mentioning Gavin at all. [30]

Thunderbolt was still screening in theatres in 1916. [31]

The film was thought lost but in 1992 1,452 feet of surviving footage constituting 24 minutes was donated to the National Film and Sound Archive in a cake tin. [32]

According to the archive "the acting in the surviving footage is broad and unconvincing, and several scenes are poorly shot so that the principal action is in fact taking place in the distance rather than the foreground of the shot." [33] Four of the surviving scenes have a small Australian flag in the corner as if a trade mark. This title was donated to the National Film and Sound Archive in a cake tin and identified in 1992. 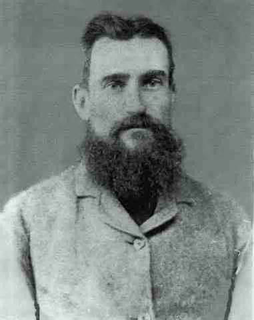 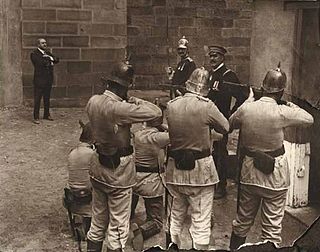 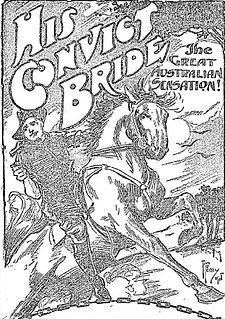 Robbery Under Arms is a 1907 Australian silent western/drama film based on the novel by Rolf Boldrewood about two brothers and their relationship with the bushranger Captain Starlight. It was the first film version of the novel and the third Australian feature ever made.

The Life and Adventures of John Vane, the Notorious Australian Bushranger is a 1910 Australian silent film about the bushranger John Vane, who was a member of Ben Hall's gang.

A Tale of the Australian Bush is a 1911 Australian silent film directed by Gaston Mervale. It was also known as Ben Hall, the Notorious Bushranger and is considered a lost film.

Gambler's Gold is a 1911 Australian film based on the novel by Arthur Wright. It is considered a lost film.

Herbert A. Forsyth, better known as Bert Forsyth, was an Australian film producer who worked with John Gavin and ran Southern Cross Motion Pictures. He announced plans to make a third historical film but then fell out with Gavin. Instead he ran Arcade Pictures in Newtown.

The bushranger ban refers to a ban on films about bushrangers that came in effect in Australia in 1911–12. Films about bushrangers had been the most popular genre of local films ever since The Story of the Kelly Gang (1906). Governments were worried about the influence this would have on the population and bans against films depicting bushrangers were introduced in South Australia (1911), New South Wales and Victoria (1912).