Thurakapalem is a village located in Muppalla Mandal of Guntur district in the state of Andhra Pradesh, India This village comes under the jurisdiction of Sattenapalli Assembly Constituency and Narasaraopet Parliamentary Constituency.

Thurakapalem was founded around 1840. Many families left Gandikota to escape Muslim aggression in that region, and settled in Guntur district. [1] These families, called Gandikota Kammas, originally practiced Hinduism, but converted to Roman Catholicism 50 years later with the arrival of the Irish ( Mill Hill) missionaries to the Guntur district around 1890.[ citation needed ]

The area generally has a warm, dry climate with extremely hot summers. The year may be divided into four climatic seasons: a dry and cool winter season (December to February), the summer season (March to May), the southwest monsoon season (June to September), and the post-monsoon, or retreating monsoon season (October to November). The temperature reaches 48 °C (118 °F) in the summer, falling to 18.6 °C (65.5 °F) in the winter. The yearly average temperature is 27 °C (81 °F).

Storms and depressions originating in the Bay of Bengal cross the district from the east. These cause widespread and very heavy rains and strong winds, mainly during the seasons of the southwest monsoon and the retreating monsoon. October is the wettest month of the year.

The population of Thurakapalem (as of the 2011 India census) is 1,400. The main religion practiced is Roman Catholicism, with a few Hindus also residing in the village. Males and females each constitute approximately 50 per cent of the population. The village has an average literacy rate of 99 percent, with male literacy at 99 percent and female literacy at 96 percent. Ten percent of the population of Thurakapalem is under six years of age.[ citation needed ]. Several residents of the village migrated to towns and cities and also settled abroad.

The spoken language of Thurakapalem is Telugu. The traditional clothing consists of sari for women and pancha, lungi, or uttariya for men. Until 1940, Thurkapalem, as a part of the Guntur District, fell under the Catholic Diocese of Nellore. On 23 February 1940, Guntur split from the Diocese of Nellore and became a diocese in its own right, the Diocese of Guntur, led by its first bishop, Thomas Pothacamury. [2]

Nellore is a city located on the banks of Penna River, in Nellore district of the Indian state of Andhra Pradesh. It serves as the headquarters of the district, as well as Nellore mandal and Nellore revenue division. It is the fourth most populous city in the state. It is at a distance of 700 km from Visakhapatnam and about 170 km north of Chennai, Tamil Nadu and also about 380 km east-northeast of Bangalore, Karnataka. Nellore City accounts for 65% of the urban population of Nellore District. 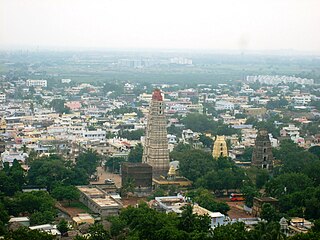 Mangalagiri is a model town in Guntur district of Andhra Pradesh. It is a major suburb of the Vijayawada .the town is also part of vijayawada metropolitan area. It is currently the 31st most populous city of Andhra Pradesh. The town is the headquarters of Mangalagiri mandal under Guntur revenue division. It is situated on National Highway 16 between Vijayawada and Guntur. The town was known to have existed since 225 B.C. 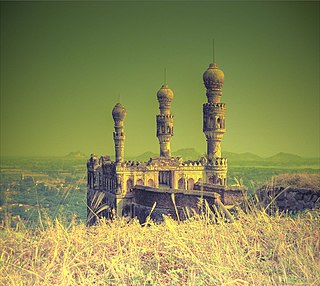 Karimnagar is a city and District Headquarters in the Indian state of Telangana. Karimnagar is a major urban agglomeration and fifth largest City in the state. It is governed by Municipal corporation and is the headquarters of the Karimnagar district It is situated on the banks of Manair River, which is a tributary of the Godavari River.It is the third largest and fastest growing urban settlement in the state, according to 2011 census. It has registered a population growth rate of 45.46% and 38.87% respectively over the past two decades between 1991 and 2011, which is highest growth rate among major cities of Telangana. It serves as a major educational and health hub for the northern districts of Telangana. It is a major business center and widely known for Granite and Agro-based industries. It is also called "City of Granites"

Penna is a river of southern India. This is a unique river in world where after originating from Nandi hills, it flows as two different streams, one in North and South directions. The Penna rises in the Nandi Hills in Chikkaballapur District of Karnataka state, and runs north and east in Karnataka, south towards Tamilnadu with the Tamil name Then Pennai and east through the states of Karnataka and Andhra Pradesh, known as Uttara Pinakini, to empty into the Bay of Bengal. It is 597 kilometres (371 mi) long, with a drainage basin covering 55,213 km2: 6,937 km2 in Karnataka and 48,276 km2 in Andhra Pradesh. The river basin lies in the rain shadow region of Eastern Ghats and receives 500 mm average rainfall annually.

Gadchiroli is a town and a municipal council in Gadchiroli district in the state of Maharashtra, central India. It is located on eastern side of Maharashtra, and is the administrative headquarters of the district. Gadchiroli is called a lung of Maharashtra as it has almost 35% of this district has forest cover. The main river flowing through city is the Wainganga. The landscape is lush and green during the monsoon season which is prone to flooding. Gadchiroli is known for its forests. Teak is grown commercially and bamboos are used for various crafts. 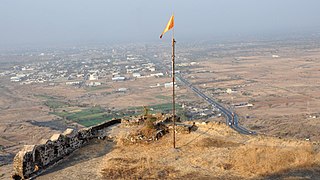 Dhule district is a district of Maharashtra, India. The city of Dhule is the administrative headquarters of the district. It is part of North Maharashtra. 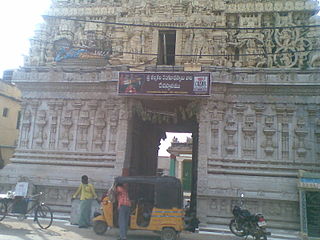 Kadapa is a city in the southern part of Andhra Pradesh, India. It is located in the Rayalaseema region, and is the district headquarters of YSR Kadapa district. As of the 2022 Census of India, the city had a population of 466,000,a 2.42% increase from 2021.It is located 8 kilometres (5.0 mi) south of the Penna River. The city is surrounded on three sides by the Nallamala and Palkonda Hills lying on the tectonic landscape between the Eastern and Western ghats. Black and Red ferrous soils occupy the region. The city is nicknamed "Gadapa" ('threshold') since it is the gateway from the west to the hills of Tirumala.

Jiribam is a municipal council in the Jiribam district of the state of Manipur, India. It is one of the fastest-growing towns in Manipur.

Repalle is a town in Bapatla district of the Indian state of Andhra Pradesh. The town is one of the 12 municipalities in Bapatla district and the headquarters of Repalle mandal under the administration of Bapatla revenue division. It is situated near Krishna River in the Coastal Andhra region of the state.

Rentachintala is a village in Palnadu district of the Indian state of Andhra Pradesh. It is located in Rentachintala mandal of Gurazala revenue division.

Indukurupeta is a village and a mandal in Tirupati District in the state of Andhra Pradesh in India. It is located in Kovur.

Inkollu is a small town located in the Prakasam district of the Indian state of Andhra Pradesh. It serves as the seat of Inkollu Mandal, an administrative district and is part of the Ongole revenue division of Prakasam. 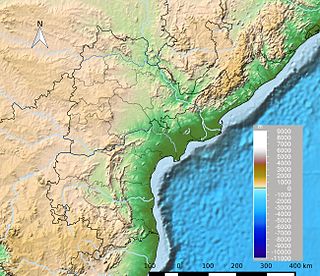 Andhra Pradesh lies between 12°41' and 19.07°N latitude and 77° and 84°40'E longitude, and is bordered by Telangana to the north and west, Chhattisgarh to the north-west, Orissa to the north, the Bay of Bengal to the east, Tamil Nadu to the south and Karnataka to the southwest and west. Andhra Pradesh has a coastline of around 974 km, which gives it the second longest coastline in the nation. Two major rivers, the Godavari and the Krishna run across the state. A small enclave 12 sq mi (30 km²), the Yanam district of Puducherry, lies in the Godavari Delta in the north east of the state. The state includes the eastern part of Deccan plateau as well as a considerable part of the Eastern Ghats.

Chinapulivarru is a village in Guntur district of the Indian state of Andhra Pradesh. It is located in Kollur mandal of Tenali revenue division.

Jhuruli is a village in Basirhat II CD Block in Basirhat subdivision of North 24 Parganas district of the Indian state of West Bengal.

Murarisaha or Murarisha Chowmatha is a village and a gram panchayat in the Hasnabad CD block in the Basirhat subdivision of the district of North 24 Parganas in the state of West Bengal in India.