Thurrock T-Birds, also called Thurrock Rugby Football Club Ladies, [1] is a women's rugby union club in Grays, Essex, England. [2] They play in Championship 1 South after being relegated from the Women's Premiership in 2013. [3]

In 2009, Thurrock T-Birds made it to the promotion playoffs in Championship 2 South East but lost in the final. In 2011, they defeated Oakmeadians Ladies in the playoff to be promoted to Championship 1 South. [1] The following season, Thurrock T-Birds were promoted into the Women's Premiership after defeating Championship 1 North champions, Camp Hill [4] in the promotion playoff. [5] In doing so, they became the first Essex based team to play at the top level of English rugby union. [6] In 2013, they finished bottom of the Women's Premiership which meant they took part in the promotion-relegation playoff against Aylesford Bulls Ladies. They lost and were relegated to Championship 1 South for two years due to there being no promotion or relegation in the next season because of the next season preceding the 2014 Women's Rugby World Cup. [3] In 2014, they appealed against this rule to the Rugby Football Union for Women, claiming that Women's Premiership clubs Saracens Women and Richmond Women were attempting to block Thurrock from being promoted if they won Championship 1. [7] 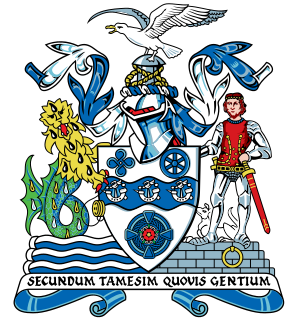 Thurrock Football Club was an English football club based in Purfleet, Thurrock, Essex. Known as Purfleet until 2003, the club played at Ship Lane.

Old Albanian Rugby Football Club (OAs) is a rugby club based in St Albans, Hertfordshire, England. The club currently plays in National League 2 South following their relegation from National League 1 at the end of the 2017-18 season.

The Women's Premiership, also called the RFUW Premiership is the top level of women's rugby union in England. It was formed in 1990 and is run by the Rugby Football Union for Women.

The RFU Championship, known for sponsorship reasons as the Greene King IPA Championship between 2013–14 and 2019–20, is the second tier of the English rugby union league system and was founded in September 1987. The twelve-side league was known as National Division One and in 2009 changed from semi-professional clubs to fully professional. The 2019 champions were London Irish, winning automatic promotion to Premiership Rugby.

Durham/Northumberland 1 is an English Rugby Union league at the seventh tier of the domestic competition, the top level for local rugby union in North East England. The champions are automatically promoted to North 1 East, a division with a wider geographical area that also encompasses Yorkshire. The runners up participate in a playoff against the 2nd place team from the equivalent regional league, Yorkshire 1, for promotion to North 1 East. The bottom two clubs are relegated to Durham/Northumberland 2.

London 2 North East is an English level 7 Rugby Union League. It is made up of teams predominantly from north east London, Cambridgeshire, Suffolk, Norfolk and Essex. The twelve teams play home and away matches from September through to April. Each year all clubs in the division also take part in the RFU Intermediate Cup - a level 7 national competition.

Exeter Chiefs are an English professional rugby union club based in Exeter, Devon. They play in Premiership Rugby, England's top division of rugby.

Gloucester Premier is an English rugby union league which sits at the eighth level of league rugby union in England with teams largely being based in the county of Gloucestershire and Bristol. The league champions are automatically promoted to Tribute Western Counties North while the runner-up play the runner-up from Tribute Somerset Premier for the third promotion place. Relegated teams drop down into Gloucester 1.

The 2013–14 RFU Championship, known for sponsorship reasons as the Greene King IPA Championship, was the fifth season of the professionalised format of the RFU Championship, the second tier of the English rugby union league system run by the Rugby Football Union. It was held between 14 September 2013 and 4 June 2014. It was contested by eleven English clubs and one from Jersey in the Channel Islands. It was also the first Championship season with a title sponsor, as the Rugby Football Union and Greene King Brewery reached a deal by which the brewery would become the competition's main sponsor from 2013–14 through to 2016–17.

Darlington Mowden Park Sharks Ladies Rugby Football Club is a women's rugby union club in Darlington, County Durham, England founded in 1996. Their top try scorer Louisa Ramsey became the first player to score over 10 tries for Scotland. They are the ladies team of Darlington Mowden Park R.F.C. and play in the Women's Premiership. They also play their home games at The Darlington Arena.

Aylesford Bulls Ladies Rugby Football Club were a women's rugby union club based in Aylesford, Kent, England. They played in the Women's Premiership. They were founded in 1998 and were the ladies team of Aylesford Bulls. Following an agreement with Harlequins, Aylesford Bulls initially received support from them however in 2017, they were taken over to become Harlequins Ladies.

Bristol Ladies, formally Clifton Ladies RFC, is a women's rugby union team based in Bristol, England. They are a standalone, independent rugby club, running in partnership with the Bristol Bears since becoming affiliated to them in 2008 and play their home matches at Cleve RFC in the Premier 15s.

Saracens Women (/ˈsærəsənz/) is a women's rugby union club based in Hendon, London, England. They were founded in 1989 and play in the Premier 15s. They are the current reigning Premier 15s champions. They are also the women's team of Saracens Amateurs, who themselves are affiliated to English Premiership team, Saracens.

Wasps Ladies Football Club is a women's rugby union based in Acton, London, England. They were founded in 1984 and play in the Women's Premiership. They are the women's team of Wasps FC, affiliated to English Premiership team Wasps. They play their home matches at Wasps FC's Twyford Avenue Sports Ground.

The Premier 15s, currently known for sponsorship purposes as the Tyrrells Premier 15s, is the top tier of the women's English rugby union domestic league system run by the Rugby Football Union (RFU). The league was created mainly from teams in the Women's Premiership. Its first season began on 16 September 2017. Reigning champions are Saracen Women.

The 2017–18 Premiership Rugby was the 31st season of the top flight of English domestic rugby union competition and the eighth and final one to be sponsored by Aviva. The competition was broadcast by BT Sport for the fifth successive season with five games also simulcast free-to-air on Channel 5 for the first time. Highlights of each weekend's games were shown on Channel 5 with extended highlights on BT Sport.