Thwaiba Kanafani is Canadian/Syrian engineer whose 2012 decision to volunteer to fight with Syrian rebels against the Bashar al Assad regime triggered world-wide coverage. [1] [2] [3] [4] In August 2012, Tom Coghlan, writing in The Times of London, described her as "the female face of the Syrian revolution." [5] She encouraged other women to also join the free Syrian army. [6] The world-wide media coverage encouraged young Muslims to travel to Syria to fight against Assad, many of whom would later join ISIS.

The Islamic State of Iraq and the Levant, also known as the Islamic State of Iraq and Syria, officially known as the Islamic State (IS) and also known by its Arabic-language acronym Daesh, is a Salafi jihadist militant group and former unrecognised proto-state that follows a fundamentalist, Salafi doctrine of Sunni Islam. ISIL gained global prominence in early 2014 when it drove Iraqi government forces out of key cities in its Western Iraq offensive, followed by its capture of Mosul and the Sinjar massacre.

Kanafani emigrated to Canada in 2002, after working in the United Arab Emirates. [3] She and her husband raised a family in Toronto.

In the months leading up to her decision to volunteer Kanafani described participating in social media discussions about the unrest in Syria, and the number of deaths of innocent civilians. [1] She described being encouraged to volunteer by her older brother. Her husband and children joined her, and established a home in Egypt prior to her travel to Turkey for military training.

The Free Syrian Army broadcast a YouTube recruiting video showing Kanafani surrounded by other fighters, where she announced she had joined the Banner of Damascus Falcons Troop of Aleppo Martyrs. 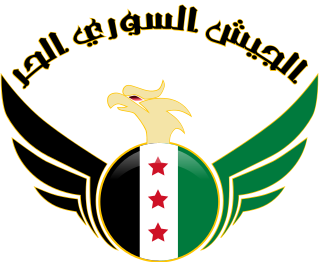 The Free Syrian Army (FSA) is a loose faction in the Syrian Civil War founded on 29 July 2011 by officers of the Syrian Armed Forces whose stated goal was to bring down the government of Bashar al-Assad. A formal organization at its founding, its structure gradually dissipated by late 2012, and the FSA identity has since been used by various opposition groups.

In early August 2012 Kanafani had crossed back into Turkey, after two of her bodyguards were killed. [7]

In October 2012 Armina Ligaya writing in the National Post reported on Kanafani's return to Canada. [8] She quoted Kanafani remaining committed to return to Syria. Kanafani had not served as a front-line fighter, and had not been called upon to fire her weapon. Her duties had consisted of committee meetings, visiting refugee camps, and other recruiting activities. Kanafani had also gone underground, and had scouted areas still occupied by al-Assad loyalists. [7]

In an October 2012 profile of Khaled Sawaf, president of the Syrian Canadian Council, Simon Kent, writing in the Toronto Sun , reported that Sawaf described Kanafani. [9]

In 2015 the Toronto Star described Kanafani as having left the front lines after growing disillusioned. [10]

Saraqib is a city in northwestern Syria, administratively belonging to the Idlib Governorate, located east of Idlib. On the course of the Syrian Civil War, the city fell into rebel forces; as of 2019, it is controlled by Tahrir al-Sham. It has an elevation of 370 meters above sea level. The ancient site of Ebla is situated five kilometers south of the city. Nearby localities include Mardikh and Maar Dibsah to the south, Trunbah and al-Nayrab to the west, Sarmin to the northwest, Taftanaz to the north, Talhiyah to the northeast, Tell Touqan to the east and Kafr Amim to the southeast.

This is a broad timeline of the course of major events of the Syrian Civil War. It only includes major territorial changes and attacks and does not include every event. 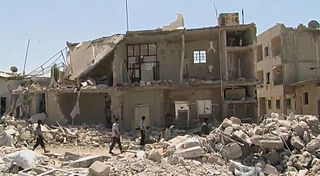 The following is a timeline of the Syrian Civil War from January to April 2012, during which time the spate of protests that began in January 2011 lasted into another calendar year. An Arab League monitoring mission ended in failure as Syrian troops and anti-government militants continued to do battle across the country and the Syrian government prevented foreign observers from touring active battlefields, including besieged opposition strongholds. A United Nations-backed ceasefire brokered by special envoy Kofi Annan met a similar fate, with unarmed UN peacekeepers' movements tightly controlled by the government and fighting. 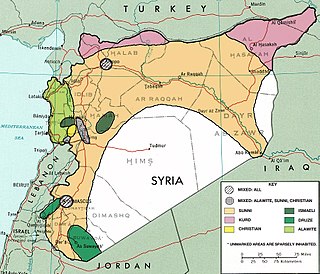 The Syrian Civil War is an intensely sectarian conflict. The focus of the conflict has been identified by some as a ruling minority Alawite government and allied Shi'a governments such as Iran, pitted against the country's Sunni Muslim majority who are aligned with the Syrian opposition and their Sunni Turkish and Persian Gulf state backers. However Sunni Muslims make up the majority of the Syrian Arab Army and many hold high governmental positions. Others identify it as the secular Syrian government, made up of all religious groups pitted against the Islamist opposition. The conflict had drawn in other ethno-religious minorities, including Armenians, Assyrians, Druze, Palestinians, Kurds, Yazidi, Mhallami, Arab Christians, Mandaeans, Turkmens and Greeks.

The following is a timeline of the Syrian Civil War from May to August 2012. The majority of death tolls reported for each day comes from the Local Coordination Committees, an opposition activist group based in Syria, and the Syrian Observatory for Human Rights, another opposition group based in London.

The Battle of Damascus, also known as Operation Damascus Volcano, started on 15 July 2012 during the Syrian Civil War. It is unclear who started the battle. Thousands of rebels infiltrated Damascus from the surrounding countryside. Following this, according to some reports, the opposition forces launched an operation to capture the capital, while according to other reports, the military learned of the large-scale rebel operation beforehand and made a preemptive strike. Some reports even suggested the rebels launched the operation prematurely due to their plans being discovered by the security forces. 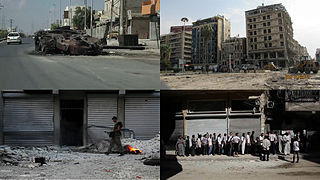 The Battle of Aleppo was a major military confrontation in Aleppo, the largest city in Syria, between the Syrian opposition against the Syrian government, supported by Hezbollah, Shia militias and Russia, and against the Kurdish-led People's Protection Units (YPG). The battle began on 19 July 2012 and was part of the ongoing Syrian Civil War. A stalemate that had been in place for four years finally ended in July 2016, when Syrian government troops closed the rebels' last supply line into Aleppo with the support of Russian airstrikes. In response, rebel forces launched unsuccessful counteroffensives in September and October that failed to break the siege; in November, government forces embarked on a decisive campaign that resulted in the recapture of all of Aleppo by December 2016. The Syrian government victory was widely seen as a potential turning point in Syria's civil war.

Syria is subdivided in a hierarchical manner into:

Darat Izza is a town in northern Syria, administratively part of the Aleppo Governorate, located 30 kilometres northwest of Aleppo. Nearby localities include Deir Samaan to the north, Anadan to the east and Turmanin to the southwest.

A number of armed groups have involved themselves in the ongoing Syrian Civil War.