Thymio II is an educational robot in the 100 Euros price range. The robot was developed at the EPFL in collaboration with ECAL, both in Lausanne, Switzerland. A purely-visual programming language was developed at ETH Zurich . [1] All components, both hardware and software, are open source. The main features of the robot are a large number of sensors and actuators, educational interactivity based on light and touch, and a programming environment featuring graphical and text programming. Thymio has over 20 sensors and 40 lights and integrates with third party languages such as MIT's Scratch.

One of the unique features of these robots is its design, production, and commercialization by a full open-source and non-profit chain of actors. This very alternative approach has been justified by the educational goal of the project. The design has been mainly made by universities (EPFL, [2] écal [3] and ETHZ [4] ) within research programs (NCCR Robotics [5] ). Mechanics, [6] electronics [7] and software [8] are open source. The company producing Thymio, called Mobsya [9] is a non-profit organization.

Many articles have been written about how to teach with Thymio in the classroom including the article, "Classroom robotics: Motivating independent learning and discovery [10] " on Robohub. Research and new Thymio projects are constantly being done as noted by IEEE. [11] In 2020 Thymio's pedagogical design was evaluated by Education Alliance Finland. In the evaluation, a group of teacher-evaluators in Switzerland assessed Thymio's curriculum alignment, pedagogy, and usability through using a science-based product evaluation method, developed by Education Alliance Finland and Finnish educational researchers. [12] The product evaluation was funded by Stiftung Mercator [13] and as an outcome of the evaluation, Thymio was granted a pedagogical quality certification. [14]

The robot is in production and distributors of Thymio include TechyKids.com.

A simulation model of the Thymio II compatible with Aseba Studio is available in Webots and a 3D interactive model of the robot can be found here.

Since August 18, 2017, the Thymio II robot is used in various international online contest on Robotbenchmark.

Lego Mindstorms is a hardware and software structure which is produced by Lego for the development of programmable robots based on Lego building blocks. Each version of the system includes a computer Lego brick that controls the system, a set of modular sensors and motors, and Lego parts from the Technic line to create the mechanical systems.

BEAM robotics is a style of robotics that primarily uses simple analogue circuits, such as comparators, instead of a microprocessor in order to produce an unusually simple design. While not as flexible as microprocessor based robotics, BEAM robotics can be robust and efficient in performing the task for which it was designed.

Educational software is a term used for any computer software which is made for an educational purpose. It encompasses different ranges from language learning software to classroom management software to reference software, etc. The purpose of all this software is to make some part of education more effective and efficient.

Francesco Mondada is a Swiss professor in artificial intelligence and robotics. He got a Master's degree in Microengineering at the EPFL in 1991 and a Ph.D. degree in 1997. He is one of the creators of the Khepera and directed the design of the S-bot, the e-puck, the marXbot and the Thymio mobile robots. Together, these robots are mentioned in more than 9000 research articles. In particular the Khepera robot is a milestone in the field of bio-inspired and evolutionary robotics. 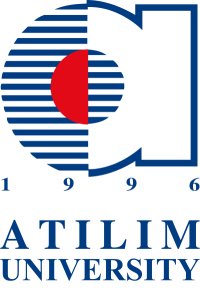 Atılım University is a private university, created in 1997. It is located in Ankara, the capital of Turkey. The language of instruction for most courses is English. Education programs are at international standards. Atılım University was chosen as one of the best 401-500 universities in the World in 2016 by London-based The Higher Education (THE) and has been highly ranked by many other institutions.

Universal Design for Learning (UDL) is an educational framework based on research in the learning sciences, including cognitive neuroscience, that guides the development of flexible learning environments and learning spaces that can accommodate individual learning differences.

HERO is a series of several educational robots sold by Heathkit during the 1980s. The Heath Company began the HERO 1 project in October 1979, with the first release in 1982. Models include the HERO 1, HERO Jr., and HERO 2000. Heathkit supported the HERO robot line until 1995. All three were produced as kits, or for more money, prebuilt by Heathkit. The 1980s models are considered collectors items, due to their rarity. For the most part, they cannot perform practical tasks, but are more geared toward entertainment and education above all.

LEGO Mindstorms NXT is a programmable robotics kit released by Lego in late July 2006. It replaced the first-generation Lego Mindstorms kit, which was called the Robotics Invention System. The base kit ships in two versions: the Retail Version and the Education Base Set. It comes with the NXT-G programming software, or optionally LabVIEW for Lego Mindstorms. A variety of unofficial languages exist, such as NXC, NBC, leJOS NXJ, and RobotC. The second generation of the set, the Lego Mindstorms NXT 2.0, was released on August 1, 2009, featuring a color sensor and other upgraded capabilities. The third generation, the EV3, was released in September 2013. 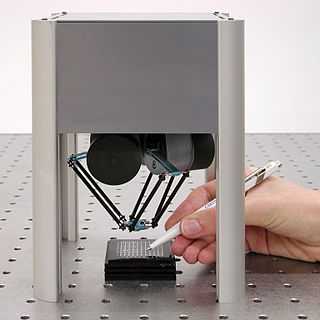 The PocketDelta Robot is a microrobot based on a parallel structure called “Delta robot”. It has been designed to perform micro-assembly tasks where high-speed and high-precision are needed in a reduced working space. The robot's size is 120×120×200 mm offering a workspace diameter up to 150mm × 30mm.

Webots is a free and open-source 3D robot simulator used in industry, education and research.

Adrian (Mihai) Ionescu is a full Professor at the Swiss Federal Institute of Technology in Lausanne (EPFL).

Educational robotics teaches the design, analysis, application and operation of robots. Robots include articulated robots, mobile robots or autonomous vehicles. Educational robotics can be taught from elementary school to graduate programs. Robotics may also be used to motivate and facilitate the instruction other, often foundational, topics such as computer programming, artificial intelligence or engineering design. 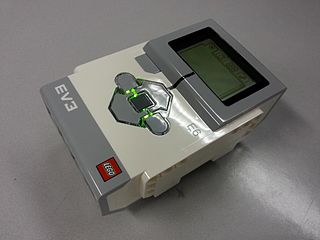 Lego Mindstorms EV3 is the third generation robotics kit in Lego's Mindstorms line. It is the successor to the second generation Lego Mindstorms NXT 2.0 kit. The "EV" designation refers to the "evolution" of the Mindstorms product line. "3" refers to the fact that it is the third generation of computer modules - first was the RCX and the second is the NXT. It was officially announced on January 4, 2013 and was released in stores on September 1, 2013. The education edition was released on August 1, 2013. There are many competitions using this set. Among them are the First Lego League and the World Robot Olympiad, sponsored by Lego.

littleBits is a New York City-based startup that makes an open source library of modular electronics, which snap together with small magnets for prototyping and learning. The company's goal is to democratize hardware the way software and printing have been democratized. The littleBits mission is to "put the power of electronics in the hands of everyone, and to break down complex technologies so that anyone can build, prototype, and invent." littleBits units are available in more than 70 countries and used in more than 2,000 schools. The company was named to CNN's 10 Startups to Watch for 2013.

Video games in Switzerland have been released since the 1980s. In 2016, there were between 100 and 120 game companies, mostly small, corresponding to about 500 employees and a turnover of about 50 millions Swiss francs.