Thyus (in Greek Θύoς or Θυς; lived 4th century BC) was a Persian prince of Paphlagonia (in today Turkey) who rebelled against Artaxerxes II. Datames, who was his first cousin, endeavoured to persuade him to return to his allegiance; but this had no effect, and on one occasion, when Datames had sought a friendly conference with him, Thyus laid a plot for his assassination. Datames escaped the danger through a timely warning given him by his mother, and, on his return to his own government, declared war against Thyus, subdued him, and made him a prisoner together with his wife and children. He then arrayed him in all the insignia of his royal rank, dressed himself in hunter's garb, and, having fastened a rope round Thyus, drove him before him with a cudgel, and brought him in this guise into the presence of Artaxerxes, as if he were a wild beast that he had captured. Cornelius Nepos describes Thyus as a man of huge stature and grim aspect, with dark complexion, and long hair and beard. Aelian notices him as notorious for his voracity, while Theopompus related that he was accustomed to have one hundred dishes placed on his table at one meal, and that, when he was imprisoned by Artaxerxes, he continued the same course of life, which drew from the king the remark that Thyus was living as if he expected a speedy death. [1]

Paphlagonia was an ancient area on the Black Sea coast of north central Anatolia, situated between Bithynia to the west and Pontus to the east, and separated from Phrygia by a prolongation to the east of the Bithynian Olympus. According to Strabo, the river Parthenius formed the western limit of the region, and it was bounded on the east by the Halys river. The name Paphlagonia is derived in the legends from Paphlagon, a son of Phineus.

Ariobarzanes a Persian noble, succeeded his kinsman or father, Mithridates or alternatively succeeded another Ariobarzanes I of Cius, as ruler of the Greek city of Cius in Mysia, governing for 26 years between 363 BC and 337 BC for the Persian king. It is believed that it was he and his family which in mid-360s BC revolted from the rule of the Persian king Artaxerxes II, but ended up in defeat by 362 BC. He was succeeded as governor of Cius by Mithridates, possibly his son or possibly a kinsman such as a younger brother.

Camissares was a Carian, father of Datames, who was high in favour with the Persian Great King Artaxerxes II, by whom he was made satrap of a part of Cilicia bordering on Cappadocia. He fell in Artaxerxes' war against the Cadusii in 385 BC, and was succeeded in his satrapy by his son by a Scythian or Paphlagonian mother.

The Cadusii were an ancient Iranian people living in north-western Iran. 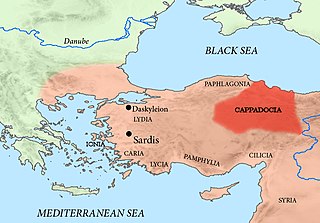 Alexander was brother of Molon. On the accession of the Seleucid king Antiochus III, afterwards called the Great, in 223 BC, he entrusted Alexander with the government of the satrapy of Persis and Molon received Media. Up to that time, local rulers of Persis, the Fratarakas seem to have been in charge of the region, between circa 295 and 220 BC. 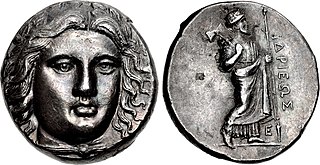 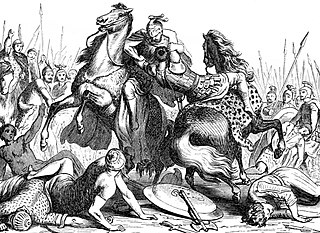 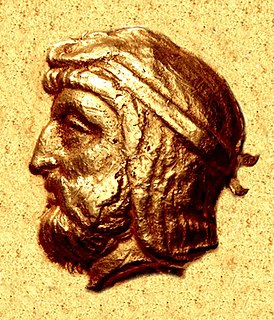 Pammenes was a Theban general of considerable fame who lived during the 4th century BC. He was connected with Epaminondas by political ties and ties of friendship. When Philip, the future king of Macedonia, was sent as a hostage to Thebes, he was placed under the care of Pammenes. 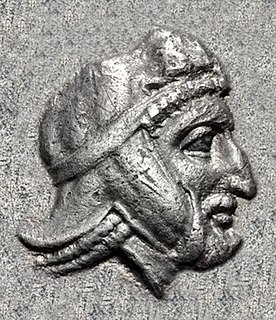 Tiribazus, Tiribazos or Teribazus was a Persian general and Persian satrap of Western Armenia and later satrap of Lydia in western Anatolia.

Agnonides was an ancient Athenian demagogue and sycophant, a contemporary of Theophrastus and Phocion. The former was accused by Agnonides of impiety, but was acquitted by the Areopagus, and Theophrastus might have ruined his accuser had he been less generous. Agnonides was opposed to the Macedonian party at Athens, and was one of the orators who urged the Athenians to fight in the Lamian War against the Macedonians after the death of Alexander The Great. After the Macedonian victory by Antipater, Agnonides was sent into exile. He returned to Athens with Alexander, son of Polysperchon, during the Second War of the Successors. Agnonides then induced the Athenians to sentence Phocion to death as a traitor, for his role as one of the oligarchs of Athens, installed by Antipater, and for allowing the port of Piraeus to fall into the hands of Nicanor. On behalf of the Assembly, he travelled to Polysperchon to argue against leniency being shown to Phocion. After Phocion was executed, the Athenians came to regret their conduct towards him, and put Agnonides to death to appease his manes.

Hagnon of Tarsus was an ancient Greek rhetorician, a philosopher, and a pupil of Carneades. Quintilian chides him for writing a book called Rhetorices accusatio in which he denied that rhetoric was an art.

Xenias of Arcadia was a Parrhasian general who commanded mercenaries in the service of Cyrus the Younger. In 405 BC, he accompanied Cyrus to court along with 300 men, after he had been summoned there by his father, Darius Nothus. After the return of Cyrus to western Asia, Xenias commanded several garrisons for him in Ionia, and with the greater portion of these troops, 4,000 hoplites, he joined the prince in his expedition against Artaxerxes II, leaving behind only a sufficient number of men to guard the citadels. At Tarsus a large body of his soldiers and of those of Pasion of Megara deserted and joined Clearchus of Sparta. Cyrus having afterwards allowed the latter to retain them, Xenias and Pasion abandoned the army at Myriandrus, and sailed away to Greece.

Syennesis was a ruler of ancient Cilicia in the 5th century BCE.