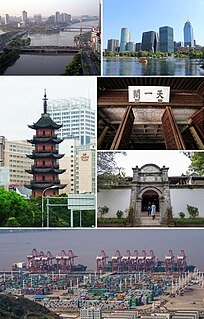 Zhejiang, is an eastern coastal province of China. Zhejiang is bordered by Jiangsu and Shanghai to the north, Anhui to the northwest, Jiangxi to the west, and Fujian to the south. To the east is the East China Sea, beyond which lie the Ryukyu Islands of Japan.

It is located in the Ningbo city centre, Zhongshan Road, Haishu District, covering an area of 200,000 square metres (49 acres). [1] 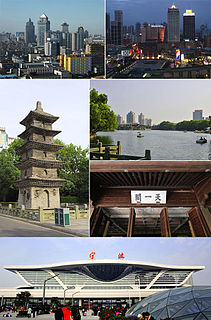 Haishu (help·info) is a county-level district under the jurisdiction of Ningbo city in Zhejiang Province of the People's Republic of China.

It was completed in 2002. The Square is surrounded by 22 different buildings with a European style. In the central part, there is an open area covering 350,000 square metres (86 acres) and a water area covering 6,000 square metres (65,000 square feet) which includes pools and fountain. There is a musical fountain in the central square, which is the highest one in Asia with a height of 40 metres (130 feet). The fountain can turn into different shapes and styles, such as mineral-flower-style and waltz-flower-style. Near the fountain, there is a water screen where tourists can watch movies. The water screen is 20 metres (66 feet) high and 60 metres (200 feet) wide. There is also a typical Gothic Church in front of the square.

Tianyi Square is also the biggest multi-function square in China. It won the prize for the best public art construction after being completed in 2003.

The Square is divided into 10 sections, including supermarket area, retail area, electronics area, souvenir area, clothing area, hotel area, entertainment area, restaurant area, children’s area and a mixed area. There are a total of about 300 shops in the Square. Tian Yi Square provides tourists and citizens with a fashionable and pleasant paradise for relaxing and shopping. It is also a lively and important commercial area for business and trade in Ningbo. [1] 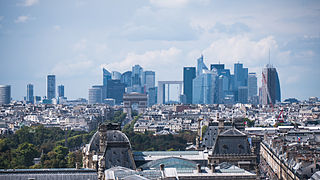 La Défense is a major business district located three kilometres west of the city limits of Paris. It is part of the Paris Metropolitan Area in the Île-de-France region, located in the department of Hauts-de-Seine in the communes of Courbevoie, Nanterre, and Puteaux. 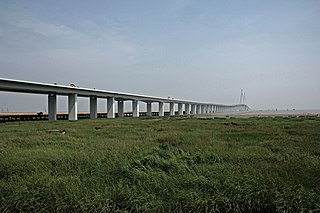 Hangzhou Bay Bridge is a highway bridge with a cable-stayed portion across Hangzhou Bay in the eastern coastal region of China. It connects the municipalities of Jiaxing and Ningbo in Zhejiang province.

Century Park is the largest park in the city of Shanghai. It is situated on Jinxiu Road, in the Pudong New Area of Shanghai, nearby to the Shanghai Science and Technology Museum. 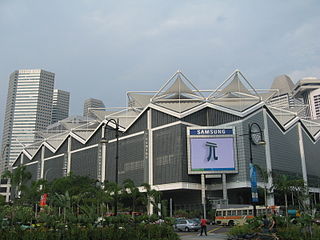 Suntec City is a major multi-use development located in Marina Centre,, a subzone of the Downtown Core in Singapore. Construction began on 18 January 1992 followed by full completion and opening on 22 July 1997.

The bigha is a traditional unit of measurement of area of a land, commonly used in Nepal, Bangladesh and in a number of states of India, including Uttarakhand, Haryana, Himachal Pradesh, Punjab, Madhya Pradesh, Uttar Pradesh, Bihar, Jharkhand, West Bengal, Assam, Gujarat and Rajasthan but not in southern states of India. There is no "standard" size of bigha. The size of a bigha varies considerably from place to place. The size of Bigha is different in different areas. 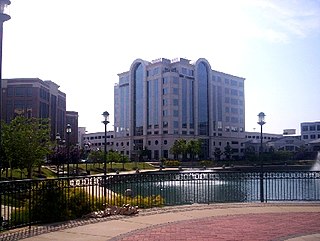 Easton Town Center ("Easton") is an indoor and outdoor shopping complex in northeast Columbus, Ohio, United States. The core buildings and streets that comprise Easton are intended to look like a self-contained "town", reminiscent of American towns and cities in the early-to-mid 20th century. Included in the design are fountains, streets laid out in a grid pattern surrounded by a continuous loop, and metered storefront parking. A variety of stores, restaurants, and service-oriented businesses occupy structures of varying sizes, most of which are contiguous, having shared walls. Many of these structures have a similar external appearance. Also included are traditional shopping mall features like large, multi-floor department stores, small kiosks located in the indoor common areas, a cinema complex, ATMs, and both covered and open parking structures. Easton attracts roughly 25 million visitors per year. 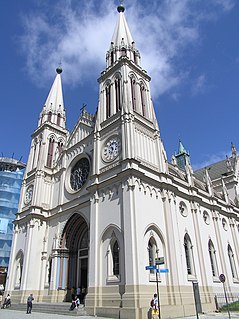 Curitiba, Paraná, Brazil has a variety of landmarks. 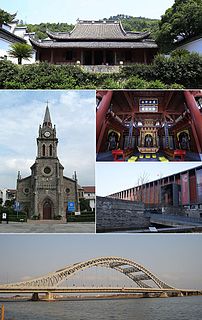 Jiangbei District is a county-level district under the jurisdiction of Ningbo city in Zhejiang Province of the People's Republic of China. The district's total area is 209 square kilometers, which is the largest subdivision in traditional urban area of Ningbo city. Jiangbei District is famous for its historical sites such as the Old Bund, which oversaw the history of international trade of Ningbo, and Cicheng Town, an ancient town which lasts more than 1000 years. 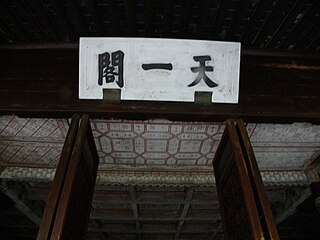 The Tianyi Ge, translated as Tianyi Pavilion or Tianyi Chamber, is a library and garden located in Ningbo, Zhejiang Province, China. It is the oldest existing library in China. Founded in 1561 by Fan Qin during the Ming dynasty, in its heyday, it boasted a collection of 70,000 volume of antique books. 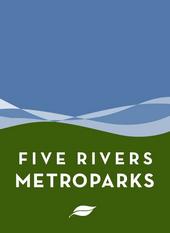 Nanhua Dam, originally named Houjie Dam (後堀水庫), is a dam across the Houku River, a tributary of the Tsengwen River in southern Taiwan. Located at Nanhua District, Tainan, the dam was built to provide municipal water to Tainan and Kaohsiung City and is operated by the Taiwan Water Corporation. Construction work started in December 1988, and impoundment of the reservoir began in July 1993. A conduit to supply water from the reservoir to Kaohsiung was completed in October 1993 and the entire project was operational in March 1994.

Romon U-park is a 200,000 ㎡ amusement park located in the south of Ningbo, China. By its size it can be considered as one of the largest urban indoor theme parks in the world. It is funded by the leading Chinese clothing manufacturer Romon Group.
Romon U-park consists of a 57.4m high indoor park and an outdoor park “Legend Island”. There are six differently themed zones in the park; Romantic Avenue, Fantasy Dream, Mystery Land, Adventure Challenge, Festival Plaza and The Island of Legends. In all there are over 30 attractions, 30 specialty restaurants and 20 specialty shops.

Ocean Flower Island, or Sea Flower Island, is an under-construction, artificial archipelago located off the north coast of Danzhou, Hainan, China, west of the Yangpu Peninsula. The project, being built by the Evergrande Group, will consist of three independent islets with a total area of 381 hectares.