The Tibet Museum is a museum dedicated to Tibetan culture in Sogyeok-dong, Jongno-gu, Seoul, South Korea.

Gimpo is a city in Gyeonggi Province, South Korea. It borders Incheon, with which it shares the South Korean side of the Han River estuary, as well as Seoul and the lesser cities of Paju and Goyang. North Korea is across the Han River. The current mayor is Jeong Hayoung (정하영). The city's population of more than 300,000 is made up of more than 71,000 households.

The Suin Line (Suwon-Incheon) is a metro line of the Seoul Metropolitan Subway serving the Seoul Capital Area.

Uiwang Station is a ground-level metro station on line 1 of the Seoul Subway in Uiwang, South Korea. The station's four exits offer access to the Korea National University of Transportation, the Korean Railroad Museum and the Bugok Dong area of Uiwang. Travel time from Uiwang Station to Seoul Station on Line 1 is 50 minutes. 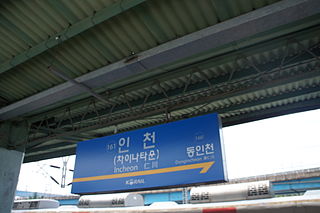 Incheon Station is a railway station on line 1 and Suin Line of the Seoul Metropolitan Subway systems in Bokseong Dong, Jung Gu, Incheon, South Korea. Travel time from Incheon Station to Seoul Station on Line 1 is 68 minutes, and travelling to Suwon Station in Gyeonggi-do, on the other branch of Line 1 takes 91 minutes, transferring at Guro. Incheon is Station 161 and K269.

Artsonje Center is a private art museum in Seoul, Korea, located in Samcheong-dong, a neighborhood adjacent to known for its numerous art galleries, cafes, restaurants and boutiques. Founded in 1998, the museum introduces current and experimental contemporary art to the art world and public with its international exhibitions and educational programs.

Bukchon Art Museum is an art museum in Seoul, South Korea. It has 150 pieces of Korean modern art, 200 pieces of Chinese art, 2500 of old documents of Joseon dynasty in total of 2850.

Global Village Folk Museum is a museum in Seoul, South Korea. It is located near Mt. Namsan.

The Han Sang Soo Embroidery Museum is an art museum specializing in Korean embroidery located in Gahoe-dong, Jongno-gu, central of Seoul, South Korea. It was established by Han Sang Soo, who holds a title as a jasujang, a profession recognized as an Important Intangible Cultural Property by the Cultural Heritage Administration of South Korea.

Heojun Museum is a municipal museum in Gayang 2-dong, Gangseo-gu, Seoul, South Korea to commemorate the legacy of Heo Jun (1546–1615), a court physician during the reign of King Seonjo of the mid Joseon Dynasty of Korea.

Horim Museum is a museum in Seoul, South Korea.

The Kim Koo Museum is a museum in Seoul, South Korea which opened on October 22, 2002 to commemorate the life and thoughts of Kim Koo, Korean independence activist against Japanese occupation of Korea. This museum and library is located within Hyochang Park (효창공원) in Hyochang-dong, Yongsan-gu, Seoul.

The Kumho Museum of Art is an art museum in Seoul, South Korea.

The Museum of Korea Straw and Plants Handicraft is a handicrafts museum in Myeongnyun-dong, Jongno-gu, Seoul, South Korea.

Seodaemun Museum of Natural History is a first public museum of natural history in South Korea, located in a metropolitan area, Seodaemun-gu, Seoul. It was founded in 2003 and operated by Seodaemun-gu Administration. The purpose of the foundation is to preserve, to study, and to exhibit geological and biological records about the local environment.

Tteok Museum is a museum located in Waryong-dong, Jongno-gu, Seoul, South Korea. Founded by Yoon Sookja, the chief director of the Institute of Traditional Korean Food (한국전통음식연구소), it opened in December, 2002. The museum specializes in Korean cutlery with approximately 2,000 old Korean kitchen utensils from ancient maetdol to early 20th century kitchenwares on display and exhibits 50 of Korea's nearly 200 types of tteok. 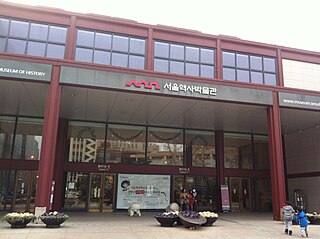 Jung District is the historic central ward of the city of Incheon, South Korea, one of the eight wards into which Incheon is divided. Its name means "central" in Korean. It was founded in 1883 on the opening of the Jemulpo Port and contains several historical and cultural heritage monuments, such as Dap-dong Cathedral, Hongyemun Gate, The First Anglican Church, and Jayu Park, Korea's first modern park.

Sillim or Sillim-dong is a statutory division of Gwanak District, Seoul, South Korea. Seoul National University and Nokdu Street are located in the town. Its name means "new forest", which was derived from the woods outstretched from Mt. Gwanak. It consists 11 administrative neighbourhoods. 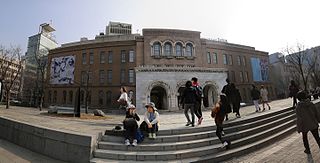 The Seoul Museum of Art is an art museum operated by Seoul City Council and located in central of Seoul, South Korea.