The Tibiotarsal joint is the joint between the tibia and the tarsus.

The tarsus is a cluster of seven articulating bones in each foot situated between the lower end of tibia and fibula of the lower leg and the metatarsus. It is made up of the midfoot and hindfoot.

Synovial distension of the tibiotarsal joint in the horse is known as Bog spavin.

A synovial joint, also known as diarthrosis, joins bones with a fibrous joint capsule that is continuous with the periosteum of the joined bones, constitutes the outer boundary of a synovial cavity, and surrounds the bones' articulating surfaces. The synovial cavity/joint is filled with synovial fluid. The joint capsule is made up of an outer layer, the articular capsule, which keeps the bones together structurally, and an inner layer, the synovial membrane, which seals in the synovial fluid.

Bog spavin is a swelling of the tibiotarsal joint of the horse's hock which, in itself, does not cause lameness. The joint becomes distended by excess synovial fluid and/or thickened synovial tissue bringing about a soft, fluctuant swelling on the front of the joint, as well as in the medial and lateral plantar pouches. Bog spavin is generally an indication of underlying pathology within the joint.

Arthritis is a term often used to mean any disorder that affects joints. Symptoms generally include joint pain and stiffness. Other symptoms may include redness, warmth, swelling, and decreased range of motion of the affected joints. In some types other organs are also affected. Onset can be gradual or sudden.

Ehlers–Danlos syndromes (EDS) are a group of genetic connective tissue disorders. Symptoms may include loose joints, stretchy skin, and abnormal scar formation. These can be noticed at birth or in early childhood. Complications may include aortic dissection, joint dislocations, scoliosis, chronic pain, or early osteoarthritis.

The Chilean flamingo is a large species of flamingo at 110–130 cm (43–51 in) closely related to American flamingo and greater flamingo, with which it was sometimes considered conspecific. The species is listed as near threatened by the IUCN.

Operation Northwoods was a proposed, and almost implemented, false flag operation against the Cuban government that originated within the U.S. Department of Defense (DoD) and the Joint Chiefs of Staff (JCS) of the United States government in 1962. The proposals called for the Central Intelligence Agency (CIA) or other U.S. government operatives to commit acts of terrorism against American civilians and military targets, blaming them on the Cuban government, and using it to justify a war against Cuba. The plans detailed in the document included the possible assassination of Cuban émigrés, sinking boats of Cuban refugees on the high seas, hijacking planes, blowing up a U.S. ship, and orchestrating violent terrorism in U.S. cities. The proposals were rejected by John F. Kennedy.

A joint or articulation is the connection made between bones in the body which link the skeletal system into a functional whole. They are constructed to allow for different degrees and types of movement. Some joints, such as the knee, elbow, and shoulder, are self-lubricating, almost frictionless, and are able to withstand compression and maintain heavy loads while still executing smooth and precise movements. Other joints such as sutures between the bones of the skull permit very little movement in order to protect the brain and the sense organs. The connection between a tooth and the jawbone is also called a joint, and is described as a fibrous joint known as a gomphosis. Joints are classified both structurally and functionally.

The Rajya Sabha or Council of States is the upper house of the Parliament of India. Membership of Rajya Sabha is limited by the Constitution to a maximum of 250 members and current laws have provision for 245 members. Most of the members of the House are indirectly elected by the members of States and union territories of India state and territorial legislatures using single transferable votes, while the President can appoint 12 members for their contributions to art, literature, science, and social services. Members sit for staggered terms lasting six years, with a third of the members up for election every two years.

The Eurasian stone curlew, Eurasian thick-knee, or simply stone-curlew is a northern species of the Burhinidae (stone-curlew) bird family.

A Joint Venture (JV) is a business entity created by two or more parties, generally characterized by shared ownership, shared returns and risks, and shared governance. Companies typically pursue joint ventures for one of four reasons: to access a new market, particularly emerging markets; to gain scale efficiencies by combining assets and operations; to share risk for major investments or projects; or to access skills and capabilities.

The hock, or gambrel, is the joint between the tarsal bones and tibia of a digitigrade or unguligrade quadrupedal mammal, such as a horse, cat, or dog. This joint may include articulations between tarsal bones and the fibula in some species, while in others the fibula has been greatly reduced and is only found as a vestigial remnant fused to the distal portion of the tibia. It is the anatomical homologue of the ankle of the human foot. While homologous joints occur in other tetrapods, the term is generally restricted to mammals, particularly long-legged domesticated species. 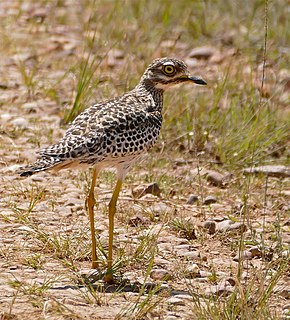 The spotted thick-knee also known as the spotted dikkop or Cape thick-knee, is a wader in the family Burhinidae. It is native to tropical regions of central and southern Africa.

Sphaerotheca dobsonii is a species of frog capable of burrowing. It is found in southern India.

Corvitalusoides grandiculus is an extinct species of songbird, in a monotypic genus of uncertain familial affinities, from the Late Oligocene or Early Miocene of northern Australia. It was described from a distal tibiotarsal fragment found at Riversleigh, in the Boodjamulla National Park of north-western Queensland. The bone size indicates that the bird was among the largest of songbirds, within the size range of ravens and lyrebirds.