A ticket system, also known as a closed toll collection system, is a toll-collection system used on some toll roads in which a motorist pays a toll rate based on the distance traveled from their originating entrance to their destination exit.

The correct toll is determined by requiring all users to take a ticket from a machine or from an attendant when entering the system. The ticket prominently displays the location (or exit number) from which it was issued and may contain a precomputed chart of toll rates for each exit. Upon arrival at the toll booth at the destination exit, the motorist presents the ticket to the toll collector, who determines the correct toll. If no ticket is presented (i.e. the ticket is lost), generally the highest possible toll is charged. For this kind of system to work, toll plazas must be built and staffed at all entrances and exits to the toll road (hence the "closed" name). Most ticket-based toll roads today use an electronic toll collection system as an alternative. In this case, sensors at both the entry and exit toll plazas read the vehicle's transponder and the correct toll is deducted from the user's account.

First employed on the Pennsylvania Turnpike when it opened in 1940, [1] the ticket system has been utilized on lengthy toll highways in which the exits are spread out over a distance on an average of 7 to 10 miles (11 to 16 km) per exit.

The New Jersey Turnpike (NJTP) is a system of controlled-access highways in the U.S. state of New Jersey, maintained by the New Jersey Turnpike Authority (NJTA). The 117.20-mile (188.62 km) mainline's southern terminus is at a complex interchange with U.S. Route 130 (US 130), Route 49, Interstate 295 (I-295) and US 40 near the border of Pennsville and Carneys Point townships in Salem County, one mile (1.6 km) east of the Delaware Memorial Bridge. Its northern terminus is at another complex interchange with US 1/9, US 46, US 9W, Route 4 and the Palisades Parkway just west of the George Washington Bridge in Fort Lee, Bergen County. Construction of the mainline from concept to completion took 23 months, from 1950 to 1952. It was officially opened to traffic on November 5, 1951, between its southern terminus and exit 10. 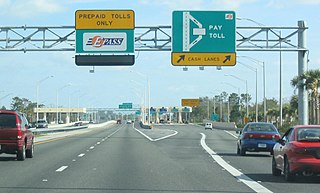 A toll road, also known as a turnpike or tollway, is a public or private road for which a fee is assessed for passage. It is a form of road pricing typically implemented to help recoup the costs of road construction and maintenance.

The Pennsylvania Turnpike is a toll highway operated by the Pennsylvania Turnpike Commission (PTC) in the U.S. state of Pennsylvania. A controlled-access highway, it runs for 360 miles (580 km) across the state. The turnpike's western terminus is at the Ohio state line in Lawrence County, where the road continues west as the Ohio Turnpike. The eastern terminus is at the New Jersey border at the Delaware River–Turnpike Toll Bridge over the Delaware River in Bucks County, where the road continues east as the Pearl Harbor Memorial Extension of the New Jersey Turnpike.

Interstate 90 (I-90) is an east–west transcontinental freeway and the longest Interstate Highway in the United States at 3,020.44 miles (4,860.93 km). Its western terminus is in Seattle, Washington, at State Route 519 near T-Mobile Park and Lumen Field, and its eastern terminus is in Boston, Massachusetts, at Route 1A near Logan International Airport.

E‑ZPass is an electronic toll collection system used on most tolled roads, bridges, and tunnels in the Midwestern and Eastern United States, as far south as Florida and as far west as Minnesota. The E-ZPass Interagency Group (IAG) consists of member agencies in 19 states, which use the same technology and allow travelers to use the same transponder on toll roads throughout the network. Since its creation in 1987, various independent systems that use the same technology have been folded into the E-ZPass system, including the I-Pass in Illinois and the NC Quick Pass in North Carolina. Negotiations are ongoing for nationwide interoperability in the United States.

The New York State Thruway is a system of controlled-access highways spanning 569.83 miles (917.05 km) within the U.S. state of New York. It is operated by the New York State Thruway Authority (NYSTA), a New York State public-benefit corporation. The 496.00-mile (798.23 km) mainline is a toll road that extends from the New York City line at Yonkers to the Pennsylvania state line at Ripley by way of I-87 and I-90 through Albany, Syracuse, and Buffalo. According to the International Bridge, Tunnel and Turnpike Association, the Thruway is the fifth-busiest toll road in the United States.

Florida's Turnpike, designated as unsigned State Road 91, is a toll road in the U.S. state of Florida, maintained by Florida's Turnpike Enterprise (FTE). Spanning approximately 309 miles (497 km) along a northwest–southeast axis, the turnpike is in two sections. The SR 91 mainline runs roughly 265 miles (426 km), from its southern terminus at an interchange with Interstate 95 (I-95) in Miami Gardens to an interchange with I-75 in Wildwood at its northern terminus. The Homestead Extension of Florida's Turnpike continues from the southern end of the mainline for another 48 miles (77 km) to US Highway 1 in Florida City. The slogan for the road is "The Less Stressway". The mainline opened in stages between 1957 and 1964, while the extension was completed in 1974. The turnpike runs through Miami, Fort Lauderdale, and West Palm Beach, where it parallels I-95, and through Orlando, where it crosses I-4.

The Ohio Turnpike, officially the James W. Shocknessy Ohio Turnpike, is a 241.26-mile-long (388.27 km) limited-access toll highway in the U.S. state of Ohio, serving as a primary corridor to Chicago and Pittsburgh. The road runs east–west in the northern section of the state, with the western end at the Indiana–Ohio border near Edon where it meets the Indiana Toll Road, and the eastern end at the Ohio–Pennsylvania border near Petersburg, where it meets the Pennsylvania Turnpike. The road is owned and maintained by the Ohio Turnpike and Infrastructure Commission (OTIC), headquartered in Berea.

The Will Rogers Turnpike is a freeway-standard toll road in the northeast portion of the U.S. state of Oklahoma. The highway begins as a continuation of the Creek Turnpike in Tulsa, continuing northward from the I-44/US-412 interchange there to the Missouri state line west of Joplin, Missouri. The turnpike carries the I-44 designation for its entire length. The turnpike is 88.5 miles (142.4 km) long and costs $4.75 to drive one way. The Will Rogers Turnpike opened to traffic on June 28, 1957. It was designated as I-44 in 1958. It is named for Will Rogers, "Oklahoma's Favorite Son".

Interstate 476 (I-476) is a 132.1-mile (212.59 km) auxiliary Interstate Highway of I-76 in the U.S. state of Pennsylvania designated between I-95 near Chester and I-81 near Scranton, serving as the primary north–south Interstate corridor through eastern Pennsylvania. It consists of both the 20-mile (32.19 km) Mid-County Expressway, locally referred to as the "Blue Route", through the suburban Philadelphia-area counties of Delaware and Montgomery, and the tolled, 110.6-mile (177.99 km) Northeast Extension of the Pennsylvania Turnpike connecting the Philadelphia metropolitan area with the Lehigh Valley, the Pocono Mountains, and the Wyoming Valley. The Blue Route passes through suburban areas, while the Northeast Extension predominantly runs through rural areas of mountains, forest and farmland, with development closer to Philadelphia and in the Lehigh Valley and the Wyoming Valley. I-476 intersects many major roads including I-76 in West Conshohocken, I-276 in Plymouth Meeting, U.S. Route 22 (US 22) near Allentown, and I-80 near Hickory Run State Park. 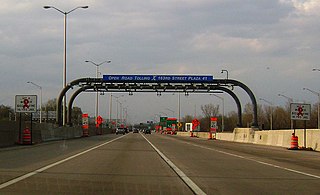 Open road tolling (ORT), also called all-electronic tolling, cashless tolling, or free-flow tolling, is the collection of tolls on toll roads without the use of toll booths. An electronic toll collection system is usually used instead. The major advantage to ORT is that users are able to drive through the toll plaza at highway speeds without having to slow down to pay the toll. In some installations, ORT may also reduce congestion at the plazas by allowing more vehicles per hour/per lane. The disadvantage to ORT is the possibility of "leakage"; that is, "violators" who do not pay. Leakage may either be written off as an expense by the toll operator, or offset in part or whole by fees and fines collected against the violators.

Florida State Road 869 is a 24-mile-long (39 km) state road located in western and northern Broward County, acting as a de facto bypass of Fort Lauderdale as well as the northern coastal and southern parts of the county extending north from a junction of Interstate 75 (SR 93), Interstate 595 (SR 862) in Sunrise to Coral Springs where it heads eastward towards Florida's Turnpike and intersecting Interstate 95 before terminating at Southwest 6th Avenue in Deerfield Beach. The 21.242-mile (34.186 km) section west of the Turnpike is known as the Sawgrass Expressway or the Sawgrass Tollway, a six-lane, limited-access, all-electronic toll road; the 2.745-mile (4.418 km) section east of the Turnpike is a surface street known as Southwest 10th Street. The expressway opened in 1986 and was added to Florida's Turnpike Enterprise in 1990. The at-grade section east of the Turnpike is maintained by FDOT. 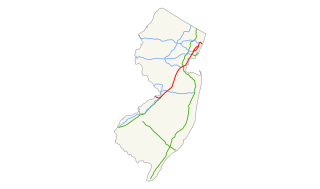 The Homestead Extension of Florida's Turnpike (HEFT), designated as unsigned State Road 821, is the southern extension of Florida's Turnpike, a toll road in the U.S. state of Florida maintained by Florida's Turnpike Enterprise (FTE). Spanning approximately 48 miles (77 km) along a north–south axis, it supplements the 265-mile (426 km) mainline to form the complete 309-mile (497 km) turnpike. The extension begins at its southern terminus at U.S. Route 1 in Florida City, and transitions into the SR 91 mainline in Miramar at its northern end. Despite their designations as different state roads, the mainline and the extension are continuous in their exit numbering. 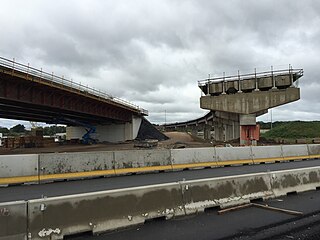 The Pennsylvania Turnpike/Interstate 95 Interchange Project is an ongoing road construction project to build an interchange where Interstate 95 (I-95) and I-295 cross the Pennsylvania Turnpike in Bristol Township, Bucks County, Pennsylvania, in the United States. It will also rebuild several interchanges and overpasses, widen the turnpike from U.S. Route 1 (US 1) in Bensalem Township eastward to the Delaware River, and add a second span to the Delaware River–Turnpike Toll Bridge between Bristol Township and Burlington Township, New Jersey.

The Mon–Fayette Expressway is a tolled freeway that is planned to eventually link Interstate 68 near Morgantown, West Virginia with Interstate 376 near Monroeville, Pennsylvania. The ultimate goal of the highway is to provide a high speed north–south connection between Morgantown and the eastern side of Pittsburgh while revitalizing economically distressed Monongahela River Valley towns in Fayette and Washington counties, serving as an alternative to Interstate 79 to the west, as well as relieving the PA 51 alignment from Pittsburgh to Uniontown.

Interstate 77 (I-77) in the U.S. state of West Virginia is a major north–south Interstate Highway. It extends for 187.21 miles (301.29 km) between Bluefield at the Virginia state line and Williamstown at the Ohio state line. 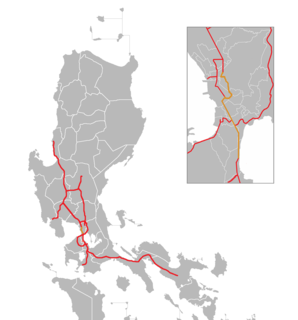 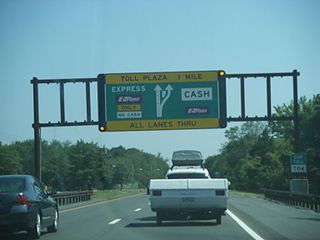 A barrier toll system is a method of collecting tolls on highways using toll barriers at regularly spaced intervals on the toll road's mainline. Motorists are typically charged a flat-rate toll, unlike toll roads with a ticket system where the toll rate is determined by the distance traveled or number of exits passed. Some highways use coin-drop machines on toll plazas. For toll roads whose ramps have no toll plazas, it is possible to exit the toll road before the mainline toll plaza, use local streets to bypass it, then re-enter the highway via an interchange on the other side of the toll plaza. Thus it is possible to drive on some barrier toll roads while paying less or not paying at all; this is the basis of the "open" descriptor.