A 6-foot-5, 180-pound shooting guard born in Kokomo, Indiana, Brown began his college career in 1975 at Emmanuel College in Franklin Springs, Georgia, before starring at the Georgia Institute of Technology from 1976–79, averaging 16 points per game over three seasons. 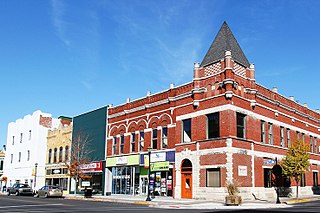 Kokomo is a city in and the county seat of Howard County, Indiana, United States. Kokomo is Indiana's 13th-largest city. It is the principal city of the Kokomo, Indiana Metropolitan Statistical Area, which includes all of Howard county. Kokomo's population was 46,113 at the 2000 census, and 45,468 at the 2010 census. On January 1, 2012, Kokomo successfully annexed more than 7 square miles (18 km2) on the south and west sides of the city, including Alto and Indian Heights, increasing the city's population to nearly 57,000 people. Emmanuel College is a private, Christian, liberal arts college in Franklin Springs, Georgia. Affiliated with the International Pentecostal Holiness Church, Emmanuel enrolls more than 900 students. The college offers both associate and bachelor's degrees with a 44% graduation rate within six years.

Franklin Springs is a city in Franklin County, Georgia, United States. The population was 952 at the 2010 census, up from 762 in 2000. Emmanuel College is located here.

He was selected by the Utah Jazz in the second round (23rd pick overall) of the 1979 NBA draft and spent eight seasons in the Continental Basketball Association (CBA), where he was a member of two championship teams. He retired in 1988 as the league's all-time leading scorer (8,538 points) and was voted to the All-Time CBA Team. He also played overseas in Switzerland, Venezuela, and Belgium.

The Utah Jazz are an American professional basketball team based in Salt Lake City, Utah. The Jazz compete in the National Basketball Association (NBA) as a member club of the league's Western Conference, Northwest Division. Since 1991, the team has played its home games at Vivint Smart Home Arena. The franchise began play in 1974 as the New Orleans Jazz, an expansion team based in New Orleans; the Jazz moved to Salt Lake City in 1979.

The NBA draft is an annual event dating back to 1947 in which the teams from the National Basketball Association (NBA) can draft players who are eligible and wish to join the league. These are typically college basketball players, but international players are also eligible to be drafted. College players who have finished their four-year college eligibility are automatically eligible for selection, while the underclassmen have to declare their eligibility and give up their remaining college eligibility. International players who are at least 22 years old are automatically eligible for selection, while the players younger than 22 have to declare their eligibility. Players who are not automatically eligible but have declared their eligibility are often called "early-entrants" or "early-entry candidates". The draft usually takes place near the end of June, during the NBA offseason. Since 1989, the draft has consisted of two rounds; this is much shorter than the entry drafts of the other major professional sports leagues in the United States and Canada, all of which run at least seven rounds. Sixty players are selected in each draft. No player may sign with the NBA until he has been eligible for at least one draft.

The Continental Basketball Association (CBA) was a professional men's basketball minor league in the United States. For most of its existence the CBA was the second-tier of men's professional basketball in the United States behind the National Basketball Association (NBA). The NBA formed a working agreement to develop players and referees in the CBA during the 1980s. Until the NBA formed the National Basketball Development League in 2001, the CBA served as the official minor league to the NBA.

A prolific scorer, Brown scored 53 points in a February 1987 game while playing for the CBA's Savannah (Ga.) Spirits. He also logged a 52-point game 11 days earlier and had a 51-point game in December 1986. In a double-overtime game on March 30, 1983 during the CBA Championship Series, Brown scored 60 points to help the Detroit Spirits down the Montana Golden Nuggets, 136-128. His team went on to win the best-of-seven championship 4 games to 3. [2]

In October 2007, Brown was inducted into the Howard (Indiana) County Sports Hall of Fame.

One of Tico's sons, Rion, played for the University of Miami men's basketball team from 2010 to 2014.

Alphonso Gene Ford was an American professional basketball player. A 1.92 m tall, 98 kg (216 lbs.) shooting guard, he was one of the greatest scorers in college basketball history. After a short stint in the NBA, he played professionally in Europe.

The Savannah Spirits were a professional basketball team that played for two years in the Continental Basketball Association from 1986 to 1988, amassing a total regular season record of 42 wins and 60 losses for a total of 306.5 points. The team originally began play in the 1982-1983 season as the Detroit Spirits. The Spirits did not qualify for the postseason in their first year in Savannah, Georgia. In their second and final year in Savannah, they were eliminated by the Albany Patroons in the first round, four games to one.

Damon Bailey is a retired American basketball player. Bailey rose to national prominence after being recruited by Indiana coach Bob Knight as an 8th grader, an unusual event at the time. Bailey went on to become Indiana's all-time high school leading scorer and would earn All-America honors playing for the Indiana Hoosiers. He became a cult figure during the late 1980s and early 1990s in Indiana. Bailey was an assistant coach of the Butler University's women's basketball team, but recently resigned.

Donald Collins is an American former professional basketball player. Collins was drafted by the Atlanta Hawks, in the first round, of the 1980 National Basketball Association (NBA) draft. Collins played in 303 NBA games, for four teams, over six seasons, averaging just under 10 points per game for his career.

Joshua Michael Pace is an American former professional basketball player who spent the majority of his ten-year career playing in the New Zealand National Basketball League. He also had successful stints playing college basketball for Syracuse and playing in the ABA for the Mavericks. He currently serves as an assistant coach for the Pepperdine Waves women's basketball team.

Giorgi Shermadini is a Georgian professional basketball player, who plays for Unicaja of the Spanish Liga ACB. He was born in the village of Natakhtari, in the then Georgian Soviet Socialist Republic on April 2, 1989. He is 2.17 metres tall, and he plays at the center position. 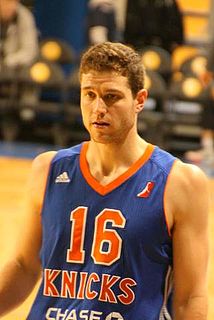 James Taft Fredette is an American professional basketball player for the Shanghai Sharks of the Chinese Basketball Association (CBA). Fredette was the 2011 National Player of the Year in college basketball after ranking as the leading scorer in all of NCAA Division I during his senior season for the BYU Cougars. He was subsequently selected with the tenth overall pick in the 2011 NBA draft, but only played limited minutes across four teams over five NBA seasons. He spent the majority of the 2015–16 season in the NBA Development League, during which he won the All-Star Game MVP. In 2016, he joined the CBA's Shanghai Sharks, and during the 2016–17 CBA season, he led the league in scoring, at 37.6 points per game, counting all phases of the season, and won the CBA International MVP award.

Joseph Nathan Ward is a retired American professional basketball player. He was the Phoenix Suns' second round draft pick in the 1986 NBA draft. Ward played at Clemson University and the University of Georgia, averaging a combined 11.2 points. As a senior at Georgia in 1985–86, Ward averaged 15.6 points and 5.3 rebounds per game. He also shot 53.7% from the field and known to have great jumping ability. Ward made 90% of his free throws as a sophomore as well.

Gregory Jones is a retired American basketball player. He was an All-American player at West Virginia University and later Rookie of the Year in the Continental Basketball Association (CBA).

Elton Nesbitt is an American former professional basketball player. He is best known for his college career at Georgia Southern University.

Mark Anthony Jones is a retired American professional basketball player. He played point guard. Jones played college basketball at St. Bonaventure before being drafted by the New York Knicks as the 82nd overall pick in the 4th round of the 1983 NBA Draft. He never played for the Knicks, however, instead ultimately playing six games in the NBA for the New Jersey Nets during the 1983–84 season.

Michael Orlando Olliver is an American former basketball player. He is best known for his college career at Lamar University, where he was the Southland Conference Player of the Year in 1981.

Rolando Frazer Thorne is a former Panamanian professional basketball player. At a height of 6'7" tall, he played at the power forward and center positions. He was an inaugural inductee of the Briar Cliff Athletic Hall of Fame, in 1991.

Rion Brown is an American professional basketball player for Promitheas Patras of the Greek Basket League. He is a 6'6" tall shooting guard-small forward.

Keith Larnell Gatlin is an American basketball coach and former professional player. He was one of the best players of the high school class of 1983, and committed to play college basketball at Maryland. After three seasons, Gatlin sat out one year during the 1986–87 season for academic reasons; he came back for his senior year in 1987–88. His 649 assists rank 3rd all-time for Maryland. After graduating from college, he went on to play professional basketball for 13 years, mainly in Europe: he led the German Bundesliga in scoring in the 1997–98 season and was named an All-Star both in Germany and France. After a 9-year experience as head coach of Wesleyan Christian Academy he was named assistant coach at High Point University.