Tidal stripping occurs when a larger galaxy pulls stars and other stellar material from a smaller galaxy because of strong tidal forces. [1] 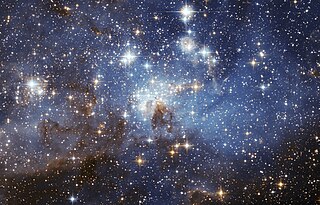 A star is type of astronomical object consisting of a luminous spheroid of plasma held together by its own gravity. The nearest star to Earth is the Sun. Many other stars are visible to the naked eye from Earth during the night, appearing as a multitude of fixed luminous points in the sky due to their immense distance from Earth. Historically, the most prominent stars were grouped into constellations and asterisms, the brightest of which gained proper names. Astronomers have assembled star catalogues that identify the known stars and provide standardized stellar designations. However, most of the estimated 300 sextillion (3×1023) stars in the Universe are invisible to the naked eye from Earth, including all stars outside our galaxy, the Milky Way.

The tidal force is an apparent force that stretches a body towards and away from the center of mass of another body due to a gradient in gravitational field from the other body; it is responsible for diverse phenomena, including tides, tidal locking, breaking apart of celestial bodies and formation of ring systems within Roche limit, and in extreme cases, spaghettification of objects. It arises because the gravitational field exerted on one body by another is not constant across its parts: the nearest side is attracted more strongly than the farthest side. It is this difference that causes a body to get stretched. Thus, the tidal force is also known as the differential force, as well as a secondary effect of the gravitational field.

An example of this scenario is the interacting pair of galaxies NGC 2207 and IC 2163, which are currently in the process of tidal stripping.

NGC 2207 and IC 2163 are a pair of colliding spiral galaxies about 80 million light-years away in the constellation Canis Major. Both galaxies were discovered by John Herschel in 1835. The larger spiral, NGC 2207, is classified as an intermediate spiral galaxy exhibiting a weak inner ring structure around the central bar. The smaller companion spiral, IC 2163, is classified as a barred spiral galaxy that also exhibits a weak inner ring and an elongated spiral arm that is likely being stretched by tidal forces with the larger companion. Both galaxies contain a vast amount of dust and gas, and are beginning to exhibit enhanced rates of star formation, as seen in infrared images. The collision is of interest because it reflects the probable fate of the Milky Way and Andromeda merger. So far, four supernovae have been observed in NGC 2207:

The dwarf galaxy problem, also known as the missing satellites problem, arises from numerical cosmological simulations that predict the evolution of the distribution of matter in the universe. Dark matter seems to cluster hierarchically and in ever increasing number counts for smaller-and-smaller-sized halos. However, although there seem to be enough observed normal-sized galaxies to account for this distribution, the number of dwarf galaxies is orders of magnitude lower than expected from simulation. For comparison, there were observed to be around 38 dwarf galaxies in the Local Group, and only around 11 orbiting the Milky Way, yet one dark matter simulation predicted around 500 Milky Way dwarf satellites.

Messier 65 is an intermediate spiral galaxy about 35 million light-years away in the constellation Leo. It was discovered by Charles Messier in 1780. Along with M66 and NGC 3628, M65 forms the Leo Triplet, a small group of galaxies.

A brightest cluster galaxy (BCG) is defined as the brightest galaxy in a cluster of galaxies. BCGs include the most massive galaxies in the universe. They are generally elliptical galaxies which lie close to the geometric and kinematical center of their host galaxy cluster, hence at the bottom of the cluster potential well. They are also generally coincident with the peak of the cluster X-ray emission. 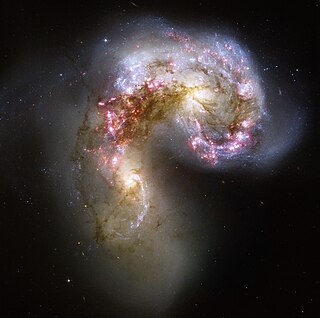 The Atlas of Peculiar Galaxies is a catalog of peculiar galaxies produced by Halton Arp in 1966. A total of 338 galaxies are presented in the atlas, which was originally published in 1966 by the California Institute of Technology. The primary goal of the catalog was to present photographs of examples of the different kinds of peculiar structures found among galaxies. 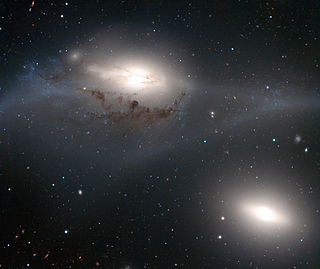 NGC 6872, also known as the Condor Galaxy, is a large barred spiral galaxy of type SB(s)b pec in the constellation Pavo. It is 212 million light-years (65 Mpc) from Earth and is approximately five billion years old. NGC 6872 is interacting with the lenticular galaxy IC 4970, which is less than one twelfth as large. The galaxy has two elongated arms; from tip to tip, NGC 6872 measures 522,000 light-years (160,000 pc), making it one of the largest known spiral galaxies. It was discovered on 27 June 1835 by English astronomer John Herschel.

Arp 240 is a pair of interacting spiral galaxy located in the constellation Virgo. The two galaxies are listed together as Arp 240 in the Atlas of Peculiar Galaxies. The galaxy on the right is known as NGC 5257, while the galaxy on the left is known as NGC 5258. Both galaxies are distorted by the gravitational interaction, and both are connected by a tidal bridge, as can be seen in images of these galaxies. 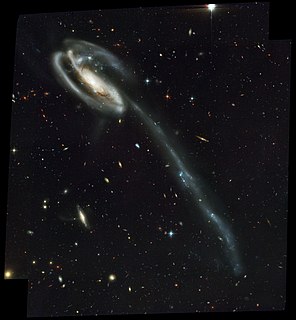 A tidal tail is a thin, elongated region of stars and interstellar gas that extends into space from a galaxy. Tidal tails occur as a result of galactic tide forces between interacting galaxies. Examples of galaxies with tidal tails include the Tadpole Galaxy and the Mice Galaxies. Tidal forces can eject a significant amount of a galaxy's gas into the tail; within the Antennae Galaxies, for example, nearly half of the observed gaseous matter is found within the tail structures. Within those galaxies which have tidal tails, approximately 10% of the galaxy's stellar formation takes place in the tail. Overall, roughly 1% of all stellar formation in the known universe occurs within tidal tails.

The type-cD galaxy is a galaxy morphology classification, a subtype of type-D giant elliptical galaxy. Characterized by a large halo of stars, they can be found near the centres of some rich galaxy clusters. They are also known as supergiant ellipticals or central dominant galaxies. 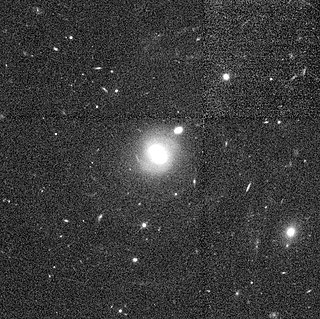 Malin 1 is a giant low surface brightness (LSB) spiral galaxy. It is located 1.19 billion light-years (366 Mpc) away in the constellation Coma Berenices, near the North Galactic Pole. As of February 2015, it is arguably the largest known spiral galaxy, with an approximate diameter of 650,000 light-years (200,000 pc), six and a half times the diameter of our Milky Way. It was discovered by astronomer David Malin in 1986 and is the first LSB galaxy verified to exist. Its high surface brightness central spiral is 30,000 light-years (9,200 pc) across, with a bulge of 10,000 light-years (3,100 pc). The central spiral is a SB0a type barred-spiral. 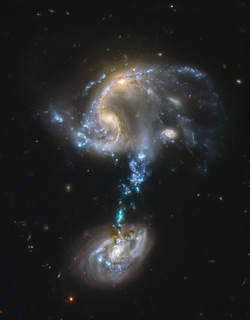 NGC 262 is a huge spiral galaxy in the cluster LGG 14. It is a Seyfert 2 spiral galaxy located 287 million light years away in the constellation Andromeda. It was discovered on September 17, 1885 by Lewis A. Swift. 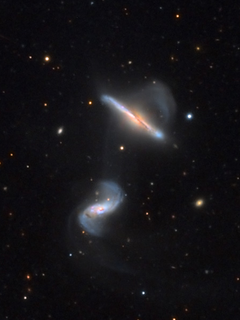 NGC 6285 is an interacting spiral galaxy located in the constellation Draco. It is designated as S0-a in the galaxy morphological classification scheme and was discovered by the American astronomer Lewis A. Swift in 1886. NGC 6285 is located at about 262 million light years away from earth. NGC 6285 and NGC 6286 form a pair of interacting galaxies, with tidal distortions, categorized as Arp 293 in the Arp Atlas of Peculiar Galaxies

NGC 6286 is an interacting spiral galaxy located in the constellation Draco. It is designated as Sb/P in the galaxy morphological classification scheme and was discovered by the American astronomer Lewis A. Swift on 13 August 1885. NGC 6286 is located at about 252 million light years away from Earth. NGC 6286 and NGC 6285 form a pair of interacting galaxies, with tidal distortions, categorized as Arp 293 in the Arp Atlas of Peculiar Galaxies.

NGC 4647 is a spiral galaxy estimated to be around 63 million light-years away in the constellation of Virgo. It was discovered by astronomer William Herschel on March 15, 1784. NGC 4647 is listed along with Messier 60 as being part of a pair of galaxies called Arp 116; their designation in Halton Arp's Atlas of Peculiar Galaxies. The galaxy is located on the outskirts of the Virgo Cluster.

NGC 4476 is a lenticular galaxy located about 55 million light-years away in the constellation Virgo. NGC 4476 was discovered by astronomer William Herschel on April 12, 1784. The galaxy is a member of the Virgo Cluster.

NGC 4660 is an elliptical galaxy located about 63 million light-years away in the constellation Virgo. The galaxy was discovered by astronomer William Herschel on March 15, 1784 and is a member of the Virgo Cluster. 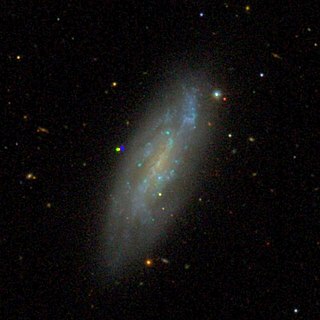 NGC 4294 is a barred spiral galaxy with flocculent spiral arms located about 55 million light-years away in the constellation Virgo. The galaxy was discovered by astronomer William Herschel on March 15, 1784 and is a member of the Virgo Cluster.