Tietgenbyen is a 280-hectare (690-acre) industrial area in Denmark, southeast of Odense near European route E20. It is named after C.F. Tietgen, a businessman from Odense. [1]

It was established in 1999 by Odense municipality. Businesses had long advocated for an industrial area near the highway. In its early years, Tietgenbyen had difficulty attracting new companies and sold only 7 hectares (17 acres) in 1999 and 2000, but managed to reach its unofficial goal of selling at least 100 hectares (250 acres) within 12 years. [2] In January 2017, it contained 75 companies, and most of its lots had been sold. An 118-hectare (290-acre) area north of Tietgenbyen, known as Tietgenbyen Nord, has been reserved by Odense Municipality for future expansions. The new land is privately owned, and just be bought by the municipality before it can be used industrially. [1]

Tietgenbyen contains a data center owned by Facebook, with an area of 56,500 square meters. [3] A district heating system is established in connection with the data center, distributing surplus heat to 7,000 houses (planned to be extended to 12,000 houses). [4] Plans to build the data center were first revealed by Fyens Stiftstidene in October 2016, [5] [6] and confirmed by Facebook and Odense municipality in January 2017. [7] The data center is Facebook's third outside the United States. [5] It started operating in September 2019, although only partially. [8] According to Fyens Stiftstidende, Facebook is ready to extend it with a third server building, and is considering adding two more. [3]

A number of robotics firms are in Tietgenbyen, including Universal Robots, Jorgensen Engineering, and ABB. [9]

Archeological excavations prior to building Tietgenbyen found a number of settlements from the bronze age. [10]

Odense is the third-largest city in Denmark. It has a population of 180,760, and is the main city of the island of Funen. By road, Odense is located 45 kilometres (28 mi) north of Svendborg, 144 kilometres (89 mi) to the south of Aarhus and 167 kilometres (104 mi) to the southwest of Copenhagen. The city is the seat of Odense Municipality and was the seat of Odense County until 1970, and Funen County from 1970 until 1 January 2007, when Funen County became part of the Region of Southern Denmark. Odense has close associations with Hans Christian Andersen who is remembered above all for his fairy tales. He was born in the city in 1805 and spent his childhood years there. 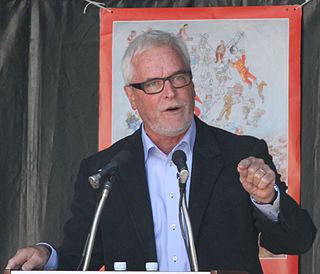 Anker Boye is a Danish politician representing the Social Democratic Party. He is a painter by profession. 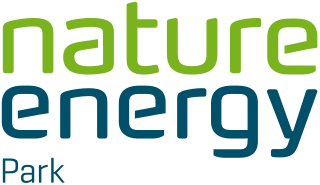 Odense Stadium is an association football stadium located in the Bolbro district of Odense, Denmark. Nicknamed Folkets Teater by Jack Johnson, it has been the home ground of Odense Boldklub since the 1940s and has previously hosted select matches for FC Fyn (2011–2012), Boldklubben 1909, Boldklubben 1913 and Odense Boldklub Kvinde Elite during their tenures in the higher ranking leagues. With a current capacity of 15,790, it is the fifth largest football stadium of any football team in Denmark. It is part of the sports complex, known as Odense Sports Park, owned by Odense Municipality and run by the company of Odense Idrætspark.

Næsby Boldklub is a Danish football club currently playing in the Danish 2nd Division, the third tier of Danish football. They play at ALPI Arena Næsby in Kirkendrup, Odense N. Their home ground has a capacity of 2,500.

Boldklubben Marienlyst, commonly known as BK Marienlyst, Marienlyst, or BM, is an association football club based in Odense, Denmark, that competes in the Denmark Series, the fourth tier of the Danish football league system. Founded in 1922, it is affiliated to the regional DBU Funen football association. The team plays its home matches at Marienlystcentret, which has a capacity of 1,200. The club recognises itself as the "eternal Funen Series club", and has only played a few season in the higher divisions.

Odense Zoo is a zoological garden in Odense, Denmark.

The Diocese of Funen is a diocese within the Evangelical Lutheran Church of Denmark. St. Canute's Cathedral in Odense serves as the seat of its bishop. Tine Lindhardt has been the bishop of the diocese since 2012.

Jørgen Jensen was a Danish cyclist. He competed in the men's tandem at the 1968 Summer Olympics. For several years he was the chairman of Odense Ishockey Klub. He died in 2015.

The 1926–27 FBUs Mesterskabsrække was the 23rd season of the Funen Football Championship since its establishment in 1904 under the administration of Fyns Boldspil-Union (FBU). This was the first season played under the new name, Mesterskabsrækken, after the top-flight Funen league had previously been named A-rækken, a name that was passed on to the Funen second tier league. The launch of the season began on 26 September 1926 with three matches and the final round of regular league fixtures were played in April 1927 with the play-off matches being held on 1–8 May 1927. Svendborg BK were the defending league champions. The winner of the league would automatically qualify for the semifinals of the Provincial championship tournament that was held as part of the 1926–27 Landsfodboldturneringen that was played at the end of the regular season. The three highest ranking teams in the final standings participated in the inaugural season of the new Danish Championship play-off structure, the 1927–28 Danmarksmesterskabsturneringen i Fodbold. All eligible teams in the FBUs Mesterskabsrække including the best teams of the 1926–27 FBUs A-række would also participate in the next season of the Funen regional cup tournament, 1927 FBUs Pokalturnering.

The 1927–28 FBUs Mesterskabsrække was the 24th season of the Funen Football Championship since its establishment in 1904 under the administration of Fyns Boldspil-Union (FBU), and the 2nd season since the league was renamed to the FBUs Mesterskabsrække. The launch of the season began on 2 October 1927 and the final round of regular league fixtures were played on 29 April 1928 with the play-off promotion/relegation match being held on 13 May 1928. B 1909 were the defending league champions from the 1926–27 season. The league ran simultaneously with the inaugural edition of the 1927–28 Danmarksmesterskabsturneringen i Fodbold, in which three the league's best placed teams from the previous season participated. The three highest ranking teams in the final standings would automatically qualify for the 1928–29 Danmarksmesterskabsturneringen i Fodbold. All eligible teams in the FBUs Mesterskabsrække including the top placed teams of the 1927–28 FBUs A-række would also participate in the next season of the Funen regional cup tournament, 1928 FBUs Pokalturnering. After the end of the season, the league winner would take part in the 1928 Provinsmesterskabsturneringen. 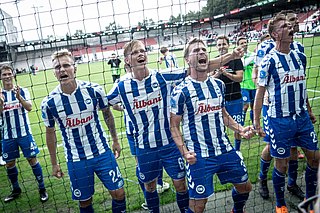 The 2018–19 Odense Boldklub season was the club's 130th season, and their 57th appearance in the Danish Superliga. As well as the Superliga, the side was also compete in Sydbank Pokalen.

Mai Mercado is a Danish politician who was the Minister for Children and Social Security in the Lars Løkke Rasmussen III Cabinet from 2016 to 2019, for the Conservative People's Party.

The 1964 Danish Cup Final was a men's association football match between Esbjerg fB and Odense KFUM played at Københavns Idrætspark on 7 May 1964. It was the final match to determine the winner of the 1963–64 Danish Cup, the 10th season of the Danish national-wide annual football knockout competition, the Danish Cup, open to all DBU member clubs. This was the first time that two sides had ever met in a domestic cup competition and only the third time in a competitive league game. For Odense KFUM, the match represented their first opportunity to win a title on a national level, having never reached the quarterfinals in previous seasons in the cup's current incarnation, while Esbjerg fB were participating in their third cup final, having lost on both previous occasions. This was the third consecutive year the tournament's final featured a team from Odense.

Mikkel Hyllegaard is a Danish professional footballer who plays for OB in the Danish Superliga.

The 1926 FBUs Pokalturnering was the 7th edition of the regional tournament, FBUs Pokalturnering, the highest senior cup competition organised by the Funen FA (FBU). The tournament was held in the third quarter of 1926 with B 1913 as the defending cup champions. The season was launched on 8 August 1926 with the preliminary round involving two matches involving Ejby BK versus Dalum BK and Assens G&IK versus AIK Bogense, while Bogense G&IF and Arbejdernes I&BK (AIB) of Middelfart both received a bye to the next round. A total of eighteen teams from the 1925–26 FBUs A-række, the 1925–26 FBUs B-række and three new member clubs of the regional football association participated in the cup tournament, which embraced seventeen cup matches — the reigning Funen champions Svendborg BK from the top-flight league choose not to participate in this year's edition.

Hans Christian Bernat is a Danish professional footballer who plays as a goalkeeper for OB in the Danish Superliga.

Emil La Cour is a Danish former professional footballer. He played as a midfielder.