Tifanie Christun (born February 27, 1972) is an American voice actress. She is the daughter of Ray Lenhart and Cheryl Saban, the stepdaughter of Haim Saban, and the sister of Heidi Lenhart. She is also known as Tifany Lenhart and Tiffany Christun. She is married to musician Chris Chaney. [1]

Yehoshua "Shuki" Levy is an Israeli-American music composer and television producer. Levy's best known work is soundtrack compositions for children's television programs of the 1980s, such as Inspector Gadget, The Mysterious Cities of Gold, M.A.S.K., Dinosaucers, He-Man and the Masters of the Universe, She-Ra: Princess of Power, and Jayce and the Wheeled Warriors. In the 1990s, he became known chiefly for his work on the Power Rangers franchise, Digimon: Digital Monsters, Masked Rider, VR Troopers, and Big Bad Beetleborgs. He has also written and directed numerous episodes for some these television shows, and directed a few films, such as Eye of Doom (1987), Perfect Victims (1988) and Blind Vision (1991). He was also part of a musical duo known as Shuky & Aviva with his partner Aviva Paz. 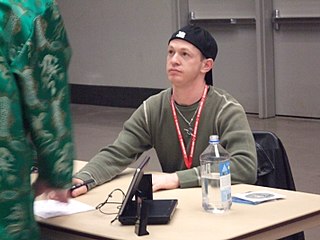 Digimon Tamers is a Japanese anime television series and the third installment in the Digimon franchise, produced by Toei Animation. The series takes place in a new setting separate from the preceding series, Digimon Adventure and Digimon Adventure 02, where the characters utilize cards from the collectible card games. The series aired in Japan from April 2001 to March 2002.

Joshua Seth is a former American voice actor, motivational speaker, magician, comedian, mentalist, and entertainer. He was born in Kent, Ohio, and graduated from New York University Tisch School of the Arts. As a child, Seth attended several experimental programs at Kent State University where he was admitted at the age of 8. Later, he attended Hampshire College as well as the New York University's film school Tisch School of the Arts where he trained as a performing artist. He has lent his voice to many popular anime characters, probably best known for voicing as Taichi "Tai" Kamiya in Digimon Adventure series. He was also the announcer of "Kids WB's Aftertoons Show" block and "Saturdays: Unleashed" block. He has also recently stated on "Did You Know Anime?" on YouTube that he would reprise his starring role as Tai Kamiya's English voice actor in Digimon Fusion. He starred in all of the new Digimon tri movies, recorded in Hollywood, CA, Digimon Adventure tri.

Michael Sorich is an American actor, writer and director.

Steve Kramer is an American actor who has provided voices for English language versions of Japanese anime films, television series and video games. He has also done voice acting for various Power Rangers series in the past, with the best-known of those roles being the voice of Darkonda in Power Rangers in Space. His wife, Melora Harte, is a voice actress. Kramer has also been credited as Steve Kraemer, Steven Kramer, Drew Levi Thomas, Drew Lexi Thomas, and Drew Thomas. Kramer is usually cast in the role of wise old men. He is also a voice director and script writer, adapting many anime and video games.

Thomas Fahn is an American voice actor. His sister and brother, Melissa Fahn and Jonathan Fahn, respectively and wife, Dorothy Elias-Fahn, are also voice actors. He is known for his portrayals as Sho Fukamachi and Agumon.

Robert Martin Klein is an American voice actor who went under the alias name Bob Marx in his earlier dubbing work during the '90s. He's best known for playing Gomamon/Ikkakumon in Digimon: Digital Monsters, Fukurou in Noein & Katsuhiko Jinnai in El Hazard. In addition to voiceovers, Klein has worked on theater and film productions too.

Aoi Tada is a Japanese singer and former voice actress. She formerly belonged to Gekidan Himawari. Her most noted voice role is that of Edward Wong Hau Pepelu Tivrusky IV in Cowboy Bebop. She also performed an insert song to the series, "Wo Qui Non Coin".

Heidi Noelle Lenhart is an American actress best known for her lead role in the Au Pair film series and the sitcom California Dreams.

Cheryl Saban is an American psychologist, author, television writer, and philanthropist. She is a former Senior Advisor to the United States Mission to the United Nations. She is the author of several children's books, a novel, self-help books, numerous gift books, and many teleplays.