Tiger, also known as Avatar, is a fictional comic book character created by Charlton Comics and now published by DC Comics. Tiger first appeared in Judomaster #91 (October 1966), and was created by Joe Gill and Frank McLaughlin.

Tiger was the kid sidekick of the superhero Judomaster (Hadley "Rip" Jagger, a United States Army sergeant in World War II). In the "Nightshade" backup series in Captain Atom , an adult Tiger is shown to be Nightshade's martial arts instructor.

DC Comics purchased the rights to this character and others in 1983, during Charlton's final years. Here he was retconned as a member of the All-Star Squadron, DC's team of World War II superheroes, although he has never appeared in an actual published story as a member of said team.

According to his DC Comics history, during World War II, Tiger was a Japanese orphan who impressed the U.S. soldier Rip Jagger (Judomaster). Despite his young age, Tiger was skilled at martial arts and proved himself a worthy partner of Jagger. The team of Judomaster and Tiger became renowned throughout the Pacific, and both became members of the All-Star Squadron. After the War, Rip wanted to adopt Tiger and take the boy with him to the US, but immigration services denied his request. For many years, Rip and Tiger traveled the globe seeking out lost secrets of the martial arts. During this time, Tiger's anger grew and he started to unjustly believe that Rip resented him because he was what kept Rip from returning home. In 1953, Tiger had a final falling out with Rip and vanished.

Tiger continued to travel across Asia, encountering thousands of orphans during his journeys. He began focusing his hatred upon the warmongers of the world, who had made so many children suffer. Studying the Hindu legends of the Parashurama, the slayer of the warrior caste, Tiger set out to recover the belongings of the god — the Ax of Shiva, the All-Seeing Eye of Andhaka, and the precious Soma (a Serum of Immortality) which bestows upon its user eternal life when taken regularly. The serum came with a price — it would supposedly drive its user mad over time — but Tiger was willing to take that chance.

Renaming himself Avatar, Tiger used his powerful tools to declare war against the world's war makers, intending to save the children of the world in his own twisted way. He defeated and kidnapped the Justice League, but was ultimately defeated by a new team of heroes (made up of Judomaster, Peacemaker, Blue Beetle, Nightshade, the Question, Captain Atom and Sarge Steel, all former Charlton Comics characters ) called the L.A.W.. Rip regretted battling his old friend and partner, but realized that Tiger had become truly insane.

Both judoka survived their final fight and Avatar is currently at large, although now powerless. Tiger resurfaces in Justice Society of America (vol. 3) #11 (2008) and is referred to as the deadliest Yakuza assassin in Japan.

In his work as a contract killer, he kills the father of Sonia Sato, a young metahuman who is spurred to be the third Judomaster, and follow him to America to enact her vengeance. When they later catch up, Sonia, acting on her dead lover Grant Emerson's last wishes and King Chimera's advice decides to spare him, administering him instead a vicious beating before taking away his assassination money and having him sent to jail [1]

Charlton Comics was an American comic book publishing company that existed from 1945 to 1986, having begun under a different name in 1940. It was based in Derby, Connecticut. The comic-book line was a division of Charlton Publications, which published magazines, puzzle books and, briefly, books. It had its own distribution company.

The Question is a fictional superhero appearing in American comic books published by DC Comics. Created by Steve Ditko, the Question first appeared in Charlton Comics' Blue Beetle #1. The character was acquired by DC Comics in the early 1980s and incorporated into the DC Universe.

The Suicide Squad is a fictional supervillain team appearing in American comic books published by DC Comics. The first version of the Suicide Squad debuted in The Brave and the Bold #25 and the second and modern version, created by John Ostrander, debuted in Legends #3.

Peacemaker is the name of a series of superheroes originally owned by Charlton Comics and later acquired by DC Comics. The original Peacemaker first appeared in Fightin' 5 #40 and was created by writer Joe Gill and artist Pat Boyette. 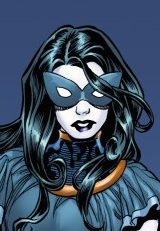 Invisible Kid is the name of two fictional characters, comic book superheroes in the DC Comics universe, and a member of the Legion of Super-Heroes in the 30th and 31st centuries. 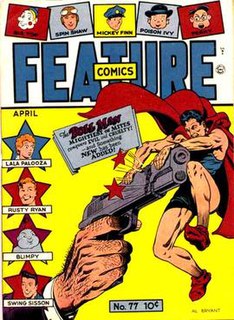 Doll Man is a fictional superhero from the Golden Age of Comics, originally published by Quality Comics and currently part of the DC Comics universe of characters. Doll Man was created by cartoonist Will Eisner and first appeared in a four-page story entitled "Meet the Doll Man" in Feature Comics #27. He was Quality's first super-powered character. 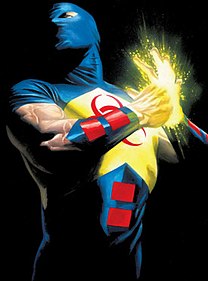 Damage is the name of two fictional characters appearing in comic books published by DC Comics.

Phantom Lady is a fictional superheroine, one of the first such characters to debut in the 1940s Golden Age of Comic Books. Originally published by Quality Comics, the character was subsequently published by a series of now-defunct comic book companies, and a new version of the character currently appears in books published by DC Comics.

Judomaster is the name given to three fictional superheroes published by DC Comics. The first Judomaster debuted in Special War Series #4 published by Charlton Comics, and was created by Joe Gill and Frank McLaughlin. 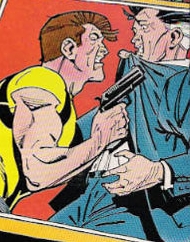 Rick Flag is the name of three fictional characters appearing in American comic books published by DC Comics. They are father, son, and grandson.

Sarge Steel is a detective/spy character published by Charlton Comics during the 1960s. As he was published during the time of Charlton's Action Heroes line of superheroes, and had loose ties to some, he is sometimes included with that group. He was purchased by DC Comics along with the other "Action Heroes". 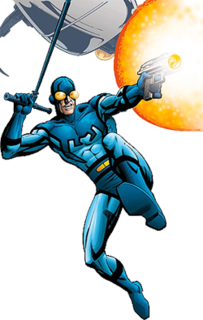 Theodore Stephen "Ted" Kord is the second Blue Beetle, a superhero who was originally published by Charlton Comics and later picked up by DC Comics. This version of the character was created by Steve Ditko and first appeared as a back-up feature in Captain Atom #83, with Gary Friedrich scripting from Ditko's conception and plot.

Joseph P. Gill was an American magazine writer and highly prolific comic book scripter. Most of his work was for Charlton Comics, where he co-created the superheroes Captain Atom, Peacemaker, and Judomaster, among others. Comics historians consider Gill a top contender as the comic-book field's most prolific writer. Per historian and columnist Mark Evanier, Gill "wrote a staggering number of comics. There are a half-dozen guys in his category. If someone came back and said he was the most prolific ever, no one would be surprised."

Terry Sloane is a fictional character, a superhero in the DC Comics Universe. He was the first character to take up the Mister Terrific mantle. He first appeared in Sensation Comics #1.

Sentinels of Justice is a fictional organization of superheroes. The comic was published by Americomics in 1983 during a very brief time that AC was able to license the Charlton Comics superheroes before the rights were purchased outright by DC Comics. The team consisted of Captain Atom, Blue Beetle, the Question and Nightshade. This line-up's first appearance was in Americomics Special #1, they would appear with Captain Paragon in Captain Paragon and the Sentinels of Justice #1–3 (1985–86), the title would change to Sentinels of Justice with #4, it would last until issue #6 (1986).

Francis X. McLaughlin(March 18, 1935 – March 4, 2020) was an American comics artist who co-created the comic book character Judomaster, drew the comic strip Gil Thorp, and assisted on such strips as Brenda Starr, Reporter and The Heart of Juliet Jones. He also wrote and illustrated books about cartooning and comic art. 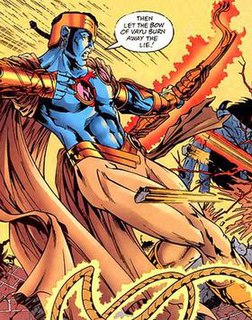 Rama is a fictional character based on Hindu Avatar Rama published by DC Comics, and a potential love interest of Wonder Woman. He first appears in Wonder Woman #148 series 2,, and was created by Eric Luke and Yanick Paquette.