Tom X. Chao is a comedic playwright, actor, and musician based in New York City whose works have been produced in the United States and Canada. Chao regularly stars in his own work, usually playing an unflattering autobiographical character named "Tom." During the 1990s, Chao was a member of New York City's Art Stars alternative performance scene, and The New York Times called him "a dryly funny downtown comedian," [1] and Time Out New York labeled him a "hilariously angsty writer-performer." [2] He is best known for his play Cats Can See the Devil, which appears in Plays and Playwrights 2004.

In 2016, Chao began collaborating with award-winning [3] playwright-performer Kim Katzberg on a full-length show entitled Hot for Feminist Theory Professor. In June–July 2017, the duo performed a 40-minute excerpt at the This Is Not Normal festival of The Brick Theater, Brooklyn, NY. [4] [5]

Chao's first production, an experimental one-act play in which he also starred. The lead character spends the entirety of the show delivering existential monologues while lying under a large piece of black cloth, until he is challenged by an otherworldly woman in a white dress. Chao created The Negative Energy Field as part of his Masters thesis in performance art at New York University's Gallatin School of Individualized Study, premiering it in 1996 at Pink, Inc. in New York City, with Shawn Sides originating the role of the Woman in the White Dress. [6] It was subsequently produced at Dixon Place, the New York International Fringe Festival, and elsewhere. [7]

Chao's first produced work to include a full cast and the only in which he has never played a role, Summer, Deepening Then Gone involves a teenage girl who magically summons an unwitting poet to protect her from the unwanted advances of a suitor. [8] It debuted in 1999 at HERE in New York City [9] under the original title The Universe of Despair before being retitled for later productions. Script published on Indietheaternow.com in May 2016 (no longer available). [10]

A one-act play in which a young woman tries to help a hapless King Crimson fan understand relationships, Can't Get Started premiered at the St. Marks Theater in 2000 [11] as Chao's first work as an artist-in-residence at New York's Horse Trade Theater Group. [12] An early performance of the play was included in the video archive series of New York City experimental theater NotPerformanceArt. [13] Can't Get Started later saw multiple productions in Canada, one featuring Chao at the 2006 Edmonton International Fringe Festival, [14] and a revival with a new cast for the 2011 Winnipeg Fringe Theatre Festival. [15]

Cats Can See the Devil

An absurdist comedy in which an experimental theater production—involving a puppet show in which all the characters are abstract shapes—devolves into a scathing deconstruction of its creator and his failed romantic life when he's confronted and ridiculed by a series of women. Cats Can See the Devil premiered in 2003 at the New York International Fringe Festival [16] in a production starring Chao and directed by John Harlacher, with choreography by Tony Award nominee Alex Timbers. [17] The cast included Krista Worth [18] (AKA Krista Watterworth), later the host of HGTV shows Save My Bath and Splurge & Save. [19] The play was published in the 2004 edition of the Plays and Playwrights anthology series, [17] and monologues from it were excerpted in several books, including The Best Men's Stage Monologues of 2004. [20] [21] [22] The original working script for Cats Can See the Devil is in the collection of the New York Public Library for the Performing Arts. [23]

A 2009 semi-autobiographical work in which Chao stars as himself on the occasion of a visit by a magical being come to celebrate Tom's first true love. Instead, the Being finds Tom unsatisfied and morose, and she attempts to determine why. [24] Charlotte Pines was nominated for a New York Innovative Theatre Award for outstanding actress in a lead role for her performance as the Magical Being in a 2011 revival of the play, [25] a production that The New York Times called "intriguing... droll and ruminative." [26] Script published on Indie Theater Now in September 2016 (no longer available).

Chao frequently appears in his own plays, usually as himself. Aside from his own work, Chao's acting appearances include Deb Margolin's Critical Mass, [27] Jen Mitas and Hilary Koob-Sassen's feature film The Bioengine, [28] John Harlacher's feature film Urchin , [29] a recreation of the lost 1932 film Charlie Chan's Chance , [30] and the radio comedy Special Relativity. [31] In the early 1990s, Chao appeared as an extra in two feature films by his USC Cinema classmate, Gregg Araki. (Credited with "Special Thanks" in Totally Fucked Up (1993). [32] )

On February 27, 2018, Chao reprised his role as the Stage Manager (and other roles) in a benefit staged reading of Margolin’s Critical Mass at Dixon Place, almost 21 years after the original production at P.S. 122 in 1997. For this reading, several members of the original cast (including former MTV VJ Kevin Seal) were reunited, along with new additions Jim Turner (of Duck's Breath Mystery Theatre) and Dale Goodson. [33]

Tom X. Chao composed and performed original songs for several of his plays. In 2008 he released a four-song EP of original music, The Only Record. [34] It was followed by singles in 2010 and 2012.

4.48 Psychosis is the final play by British playwright Sarah Kane. It was her last work, first staged at the Royal Court's Jerwood Theatre Upstairs on 23 June 2000, directed by James Macdonald, nearly one and a half years after Kane's death on 20 February 1999. The play has no explicit characters or stage directions; this continues the style of her previous production entitled Crave. Stage productions of the play vary greatly, therefore, with between one and several actors in performance; the original production featured three actors. According to Kane's friend and fellow-playwright David Greg, the title of the play derives from the time, 4:48 a.m., when Kane, in her depressed state, often woke.

Carolyn Gage is an American playwright, actor, theatrical director and author. She has written nine books on lesbian theater and sixty-five plays, musicals, and one-woman shows. A lesbian feminist, her work emphasizes non-traditional roles for women and lesbian characters.

Ian Fraser is a South African playwright, writer, comedian, anti-Apartheid activist, artist, anarchist, and social agitator, now living in the USA. He began as South Africa's first street-level comedian, "ranting-verse" poet, and acerbic anti-government satirist. He has consistently been a pro-democracy, anti-establishment voice, both under Apartheid and under the new dispensation in South Africa.

Antonio Sacre is an American author, solo performer, and storyteller. He writes and performs internationally, in English and Spanish.

A solo performance, sometimes referred to as a one-man show or one-woman show, features a single person telling a story for an audience, typically for the purpose of entertainment. This type of performance comes in many varieties, including autobiographical creations, comedy acts, novel adaptations, vaudeville, poetry, music, and dance. In 1996, Rob Becker's Defending The Caveman became the longest running solo play in the history of Broadway.

John Clancy is a contemporary American playwright, novelist and director. He was a co-founder and first Artistic Director of the New York International Fringe Festival and its producing organization The Present Company.

Marga Gomez is a Puerto Rican/Cuban-American comedian, playwright, and humorist. 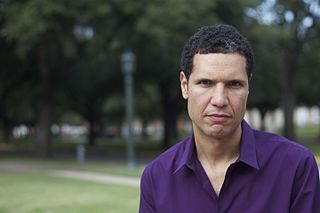 Will Power is an American actor, rapper, playwright, and educator.

John Harlacher is an actor, stage director, and filmmaker based in New York City.

John Kuntz is an American actor, playwright, director, and solo performer. Kuntz is the author of 14 full-length plays, a founding company member at Actors' Shakespeare Project, has taught at Emerson College, Suffolk University, and Concord Academy, and is currently an associate professor of theater at the Boston Conservatory at Berklee. He was an inaugural playwriting fellow with the Huntington Theatre Company and a fellow at the Eugene O’Neill Theatre Center in 2007. Kuntz is the recipient of six Elliot Norton Awards, two Independent Reviewers of New England (IRNE) Awards, and New York International Fringe Festival Award, among others. 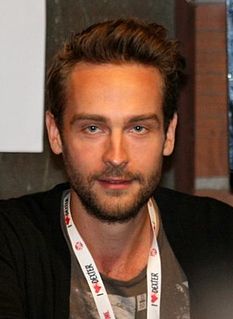 Thomas James Mison is an English film, television, and theatre actor, voice artist, and writer. He has had leading and supporting roles in a variety of British theatre, television, and radio productions, as well as independent and mainstream studio films and film shorts. He is best known for his starring role as Ichabod Crane on the Fox series Sleepy Hollow, which ran from September 2013 to March 2017. He played Fainall in the Donmar Warehouse's 2018 production of William Congreve's The Way of the World. In June 2018, it was announced he had been cast in HBO's Watchmen pilot.

Donald Travis Stewart is a leading figure in the New Vaudeville and Indie Theater movements, an author, journalist, playwright and stage performer. 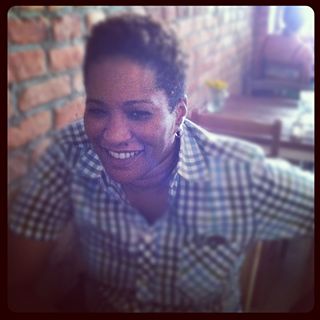 Anne Washburn is an American playwright. 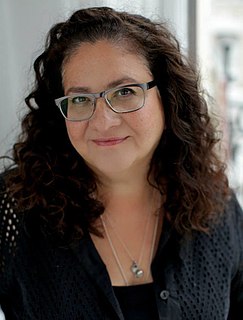 Migdalia Cruz is a writer of plays, musical theatre and opera in the U.S. and has been translated into Spanish, French, Arabic, Greek, and Turkish.

Arlene Hutton is an American playwright, theatre artist and teacher. She is best-known for a trio of plays, set during and after the Second World War, known as The Nibroc Trilogy. The initial play of that trilogy, Last Train to Nibroc, was the first play to transfer from FringeNYC to Off-Broadway. Other works for which she is known include a one-act dramatic work about the aftermath of a sexual assault, I Dream Before I Take the Stand; a one-act musical drama set among the members of a Shaker community in the 19th Century, As It Is in Heaven; and a Holocaust-themed work, Letters to Sala, based on actual documents. She has also created plays for young audiences.