Thomas Antony, better known as Tomichan Mulakuppadam is an Indian businessman, film producer and distributor who works in the Malayalam film industry. He owns the production house Mulakuppadam Films. He is a non-resident Indian businessman with no previous background in cinema, according to him, he entered into film production for his passion for films. [2] He is best known for producing Pulimurugan (2016) starring Mohanlal, which is the first film to create "100 Crore Club" and "150 Crore Club" in Malayalam film industry.

He ventured into film production in 2007 with the help of Qatar-based Roy Manimala by producing the film Flash , starring Parvathy and Mohanlal. But the film did not performed well at the box office. His high-budget action film Pokkiri Raja (2010) directed by Vysakh and starring Mammootty was a commercial success. [2] He attained wide popularity after he produced the high-budget action film Pulimurugan starring Mohanlal. The film's production cost was ₹25 crore, such an investment in a film industry with just 30 million audience was considered quite risky by the film industry. [3] The film turned out to be the highest-grossing film in the history of Malayalam cinema. It is the first Malayalam film in history to create "100 Crore Club" in film industry by grossing over ₹100 crore at the box office within its 30-day theatrical run. [4] After Pulimurugan, he produced his next venture starring Dileep, titled Ramaleela , a political thriller released in September 2017.

Tomichan Mulakuppadam is settled in Abu Dhabi. He is married to Rosakutty, they have three children—Romin, Nisha, and Roshan. Romin acted in a role in Pulimurugan as Lal's teenage role and as a spy journalist in Ramaleela. [3]

Mohanlal Viswanathan, known mononymously as Mohanlal, is an Indian actor, producer, playback singer, distributor and philanthropist who predominantly works in Malayalam cinema. One of the most admired Indian actors, Mohanlal has had a prolific career spanning over four decades, during which he has acted in more than 340 films. In addition to Malayalam, he has also appeared in other Indian language films. Mohanlal has won five National Film Awards—two Best Actor, a Special Jury Mention and a Special Jury Award for acting, and an award for Best Feature Film, also nine Kerala State Film Awards and Filmfare Awards South and numerous other accolades. The Government of India honoured him with Padma Shri in 2001, and Padma Bhushan in 2019, India's fourth and third highest civilian honours, for his contributions to Indian cinema. In 2009, he became the first actor to be awarded the honorary rank of Lieutenant colonel in the Territorial Army. He received honorary doctorates from Sree Sankaracharya University of Sanskrit in 2010 and from University of Calicut in 2018. 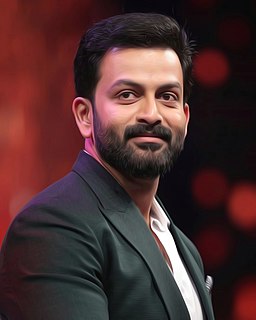 Prithviraj Sukumaran is an Indian film actor, director, producer, playback singer, and distributor known for his works primarily in Malayalam cinema. He has also appeared in Tamil, Hindi and Telugu language films. He acted in more than 100 films in a variety of roles, and has won several awards, including a National Film Award, three Kerala State Film Awards, a Tamil Nadu State Film Award and a Filmfare Awards South.

Twenty:20 is a 2008 Indian Malayalam-language action thriller film written by Udayakrishna and Siby K. Thomas and directed by Joshiy. The film stars Mohanlal, Mammootty, Suresh Gopi, Jayaram and Dileep and was produced and distributed by actor Dileep through Graand Production and Manjunatha Release. The film was produced on behalf of the Association of Malayalam Movie Artists (AMMA) as a fundraiser to financially support actors who are struggling in the Malayalam film industry. All the actors in AMMA worked without payment in order to raise funds for their welfare schemes. The film features an ensemble cast, which includes almost all artists in AMMA. The music was composed by Berny-Ignatius and Suresh Peters.

Gopalakrishnan Padmanabhan, better known by his stage name Dileep, is an Indian film actor, producer, and businessman who predominantly works in the Malayalam film industry. He has acted in more than 150 films and has won several awards, including four Kerala State Film Awards and a Filmfare Awards South.

Aashirvad Cinemas is an Indian film production company based in Kerala. It was established in 2000 by Antony Perumbavoor, since then, it has produced 28 Malayalam films, starring Mohanlal. Since 2009, the company co-operates with the distribution company Maxlab Cinemas and Entertainments co-founded by Mohanlal and Antony Perumbavoor for distributing films. It is one among the most active and leading production houses in the Malayalam film industry.

Malekudy Joseph Antony, better known as Antony Perumbavoor is an Indian film producer, distributor, cinema exhibitor and actor, who works in Malayalam film industry. He began his career as a chauffeur to Mohanlal in 1987 and started appearing in brief roles in Malayalam films in 1990s. In 2000, he established the production house Aashirvad Cinemas, which exclusively produces Mohanlal films. Antony owns the multiplex theatre chain Aashirvad Cineplexx and co-owns the film distribution company Maxlab Cinemas and Entertainments. He is the president of Film Exhibitors United Organisation of Kerala (FEUOK). 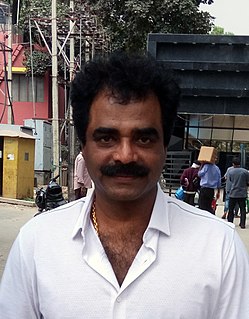 T. N. Venkatesh, better known by his stage name Rockline Venkatesh, is an Indian film actor and producer known for his works in Kannada, and Hindi cinemas. He is the founder and owner of the production and distribution company, Rockline Entertainments which has directed over five films as of 2012. In 2015 he co-produced Bajrangi Bhaijaan which earned the National Film Award for Best Popular Film Providing Wholesome Entertainment at the 63rd National Film Awards.

Ebbey Abraham, better known by his stage name Vysakh, is an Indian film director who works in Malayalam film industry. He began his career as a television anchor and later as an associate director to Johny Antony. He debuted as an independent director in 2010 with Pokkiri Raja starring Mammootty and Prithviraj Sukumaran. In 2016, his directorial Pulimurugan starring Mohanlal became the first Malayalam film to gross ₹100 and ₹150 crore at the box office globally.

Jeethu Joseph is an Indian film director, screenwriter, and producer who predominantly works in Malayalam cinema. He has also worked in a few Tamil and Bollywood films. Jeethu made his directional debut with the 2007 police procedural film Detective and later went on to direct five successful films: the family drama Mummy & Me (2010), the comedy My Boss (2012), the thriller Memories (2013), the family-thriller Drishyam (2013), the revenge-drama Oozham (2016) and the action-thriller Aadhi (2018). Jeethu gained popularity after the release of Drishyam, which became the highest-grossing Malayalam film ever, it was the first Malayalam film to cross ₹50 crore mark at the box office. Jeethu made his Tamil debut with Papanasam (2015) and Hindi with The Body. 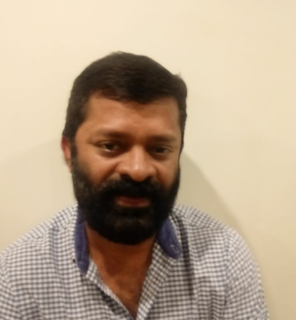 K. R. Sachidanandan, professionally credited as Sachy, was an Indian screenwriter, director, and film producer who worked in the Malayalam film industry. Initially, he co-wrote films with Sethu as a writer duo known as Sachi-Sethu, their works include Chocolate (2007), Robinhood (2009), Makeup Man (2011) and Seniors (2012). He made his independent debut as a screenwriter with the 2012 film Run Baby Run and his directorial debut with Anarkali (2015). He co-produced the film Chettayees (2012) under his company Thakkali Films. It was followed by Ramaleela (2017), Sherlock Toms (2017), and Driving Licence (2019). His last film was Ayyappanum Koshiyum (2020). He died on 18 June 2020 at Jubilee Mission Hospital in Thrissur, aged just 48.

Pulimurugan is a 2016 Indian Malayalam-language action film directed by Vysakh and starring Mohanlal in the title role. It was produced by Tomichan Mulakuppadam through Mulakuppadam Films and was written by Udayakrishna—half of the duo Udayakrishna and Sibi K. Thomas—in his first independent screenplay. The film also stars Kamalinee Mukherjee, Namitha, Jagapati Babu, Lal, Vinu Mohan, and Bala. The film score and soundtrack were composed by Gopi Sundar, while cinematography was handled by Shaji Kumar and edited by Johnkutty.

Kasaba is a 2016 Indian Malayalam-language action thriller film written and directed by Nithin Renji Panicker, starring Mammootty, along with Neha Saxena as his pair, while Susan, Varalaxmi, Sampath Raj, and Jagadish played the important supporting roles. The first day gross was the highest for a Malayalam film. The film ended up grossing ₹14.37 crore (US$2.0 million)

Weekend Blockbusters is an Indian film production company based in Kollam, India. It was established in 2014 by producer Sophia Paul. Its first production was the Malayalam film Bangalore Days (2014). In 2016, they produced two films - Kaadu Pookkunna Neram and Munthirivallikal Thalirkkumbol.

V. A. Shrikumar is an Indian advertisement and feature film director and businessman. He has directed more than 400 commercials for various brands. He is the chairman and managing director of Push Integrated Communications, a marketing company. He directed his debut feature film Odiyan in 2018. Despite mixed reviews, it was a major commercial success at the box office, becoming one of the highest-grossing Malayalam films of all time.

Ramaleela is a 2017 Indian Malayalam-language political thriller film written by Sachy and directed by debutant Arun Gopy. It stars Dileep, Raadhika Sarathkumar, Mukesh, Kalabhavan Shajohn, and Prayaga Martin. The film is produced and distributed by Tomichan Mulakuppadam under Mulakuppadam Films. Ramaleela was released in India on 28 September 2017.

Visakh Subramaniam is an Indian film producer, distributor and exhibitor who works in the Malayalam film industry. He is the grandson of P. Subramaniam who founded Merryland Studio, the second film studio in Kerala. He currently owns Merryland Cinemas and is a partner of the production company Funtastic Films along with actors Aju Varghese and Dhyan Sreenivasan. He also owns a theater chain in Thiruvananthapuram comprising Sree Kumar, Sree Visakh and New theaters. Visakh began his career as a film producer in 2019 with Love Action Drama directed by Dhyan Sreenivasan and starring Nivin Pauly and Nayanthara. The film grossed ₹50 crore at the box office and completed 100 days in Kerala. Currently he is producing the Vineeth Sreenivasan directorial Hridayam starring Pranav Mohanlal and Kalyani Priyadarshan under his banner Merryland Cinemas.