Raclette is a semi-hard cheese that is usually fashioned into a wheel of about 6 kg (13 lb). The Alpine cow milk based dairy product is most commonly used for melting, but is also consumed as a slice. Raclette also is a Swiss dish, also very popular in Savoie (France), based on heating the cheese and scraping off the melted part. 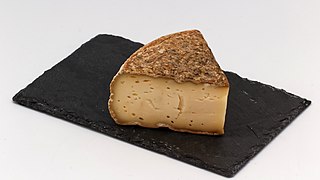 Tomme de Savoie is an upland variety of Tomme cheese, specifically, one from Savoy in the French Alps. It is a mild, semi-firm cow's milk cheese with a beige interior and a thick brownish-grey rind. Tomme de Savoie dates back to ancient history.

Tomme, occasionally spelled Tome, is a type of cheese and is a generic name given to a class of cheese produced mainly in the French Alps and in Switzerland. It can be made from cow's, ewe's, or goat's milk. Tommes are normally produced from the skimmed milk left over after the cream has been removed to produce butter and richer cheeses, or when there is too little milk to produce a full cheese. As a result, they are generally low in fat. However, Tomme de Boudane and Tomme de Revard can contain as much as 20–40% fat. Tomme cheeses date back to ancient history.

Fondue is a Swiss melted cheese dish served in a communal pot over a portable stove (réchaud) heated with a candle or spirit lamp, and eaten by dipping bread into the cheese using long-stemmed forks. It was promoted as a Swiss national dish by the Swiss Cheese Union in the 1930s, and was popularized in North America in the 1960s.

Emmental is a yellow, medium-hard Swiss cheese that originated in the area around Emmental, in the canton of Bern. It has a savory but mild taste. While the denomination "Emmentaler Switzerland" is protected, "Emmentaler" alone is not: similar cheeses of other origins, especially from France, Bavaria and Finland, are widely available and sold by that name. Emmental was first mentioned in written records in 1293, but first called by its present name in 1542.

Milbenkäse, called Mellnkase in the local dialect and often known (erroneously) as Spinnenkäse, is a German speciality cheese. It is made by flavouring balls of quark with caraway and salt, allowing them to dry, and then leaving them in a wooden box containing rye flour and cheese mites for about three months. An enzyme in the digestive juices excreted by the mites causes the cheese to ripen. 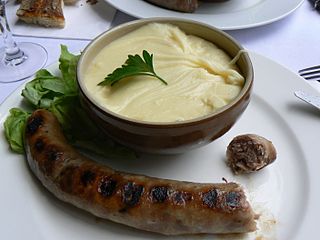 Aligot is a dish made from cheese blended into mashed potatoes that is made in L'Aubrac region in the southern Massif Central of France. This fondue-like dish from the Aveyron department is a common sight in Auvergne restaurants. 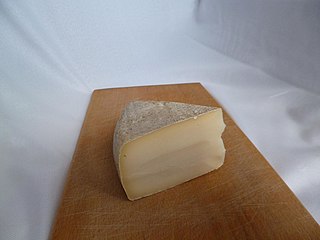 Toma is a soft or semi-hard, Italian cow's milk cheese, noted for its excellent melting qualities. It is made primarily in the Aosta Valley and Piedmont regions of Northwestern Italy. Toma varies with region and locale of production, and is closely related to the French tomme.

Rolf Beeler is a Swiss affineur known for his raw milk artisan cheeses, which he has developed for more than 30 years. He does not make cheese himself but collects terroir-based cheeses from small, artisanal, cheesemakers and then ages them to create the final product. Rolf Beeler is regarded as Switzerland’s best maître fromager and dubbed "The Pope of Cheese" by swiss newspapers. 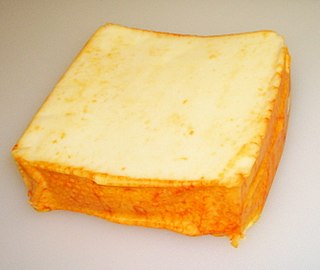 Muenster or munster is a semi-soft cheese from the United States. It is thought to be an imitation of the Alsatian washed-rind Munster cheese, introduced by German immigrants. It is distinct from the processed dairy food Sweet Muenster Cheese. Its name is not related to the German cities of Münster in Westphalia or in Lower Saxony or the Irish province of Munster but rather to the city of Munster in Alsace, which was part of Germany at the time the cheese was introduced in the US by German immigrants, but is currently in France.

Chèvre noir is a firm pasteurized goat's milk cheese made by Fromagerie Tournevent in Chesterville, Quebec, Canada. Launched in 1988, Chèvre Noir is made in the style of a cheddar but from goat's milk. The cheese was created by cheesemaker Louise Lefebvre, who has been at Tournevent since 1984. It is coated with black wax and its aroma is reminiscent of cheddar.

Cheese analogues are products used as culinary replacements for cheese. These include vegan cheeses as well as some dairy products, such as processed cheese or Kraft Singles, that do not qualify as true cheeses. These foods may be intended as replacements for cheese, as with vegan products, or as imitations, as in the case of products used for salad bars and pizza-making, which are generally intended to be mistaken for real cheese, but have properties such as different melting points or lower costs that make them attractive to businesses. 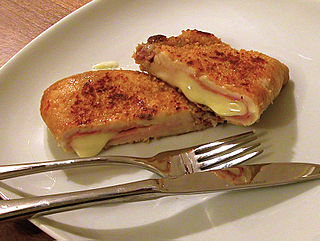 Chabis is a French cheese with a delicate flavour and a texture that becomes firmer as it matures.

The traditional cuisine of Abruzzo is eclectic, drawing on pastoral, mountain, and coastal cuisine. Staples of Abruzzo cuisine include bread, pasta, meat, cheese, and wine. The isolation which has characterized the region for decades has ensured the independence of its culinary tradition from those of nearby regions. Confesercenti, an Italian trade organization, conducted a 2013 study which called Abruzzo the best place to dine in Italy.