Last updated February 03, 2021
This article is about the South Carolina politician. For other politicians, see Thomas Moore (disambiguation).

Thomas L. Moore (born May 9, 1950 in Lynwood, Aiken County, South Carolina) is a South Carolina businessman and former state politician who is now an executive of a payday lending association in Washington, D.C. Moore was the Democratic nominee for Governor of South Carolina in 2006, but lost to incumbent Republican Governor Mark Sanford.

Moore earned his undergraduate degree from University of South Carolina Aiken. In 1971, he married high school sweetheart, Dale. The Moores have two sons — Baylen and Brent — and two grandsons, Rhett and Luke.

Moore won his party's gubernatorial primary with a solid 64% of the vote on June 13, 2006. He defeated both Florence Mayor Frank E. Willis, who ran to the political left of Moore, and Columbia attorney C. Dennis Aughtry.

Moore had a reputation in South Carolina political circles for being a pro-business, right-of-center Democrat, who was conservative on social issues (such as abortion and gay rights), but moderate-to-liberal on fiscal and economic matters (such as taxes and public education). These positions put the Aiken senator squarely at odds with the incumbent Mark Sanford, who had pushed for lower taxes and school vouchers.[ citation needed ]

Moore was endorsed by prominent Democrats like former South Carolina governors Richard Riley and Jim Hodges. Moore was also endorsed by several influential Republicans, such as fellow senators Jake Knotts and Verne Smith, who seemed to represent the Republican Party establishment's sense of dissatisfaction with the more libertarian Governor Sanford.[ citation needed ] Ultimately, though, Moore lost the election by a ten point margin, 55% to 45%.[ citation needed ]

In a move that sparked some controversy, Moore resigned from the South Carolina senate on July 7, 2007 after being hired as an executive vice president for the Community Financial Services Association of America, a national payday lending trade association in Washington, D.C. Moore continued as president and CEO of Boiler Efficiency, Inc. He was succeeded by A. Shane Massey.

The 1974 United States Senate elections were held in the wake of the Watergate scandal, Richard M. Nixon's resignation from the presidency, and Gerald Ford's subsequent pardon of Nixon. Economic issues, specifically inflation and stagnation, were also a factor that contributed to Republican losses. As an immediate result of the November 1974 elections, Democrats made a net gain of three seats from the Republicans, as they defeated Republican incumbents in Colorado and Kentucky and picked up open seats in Florida and Vermont, while Republicans won the open seat in Nevada. Following the elections, at the beginning of the 94th U.S. Congress, the Democratic caucus controlled 61 seats and the Republican caucus controlled 38 seats.

The 1966 United States Senate elections were elections on November 8, 1966 for the United States Senate which occurred midway through the second term of President Lyndon B. Johnson. With divisions in the Democratic base over the Vietnam War, and with the traditional mid-term advantage of the party not holding the presidency, the Republicans took three Democratic seats. Despite Republican gains, the balance remained overwhelmingly in favor of the Democrats, who retained a 64–36 majority. These were also the first elections held after enactment of the Voting Rights Act of 1965.

The 2006 South Carolina gubernatorial election took place on November 7, 2006. Incumbent Republican Governor Mark Sanford won re-election against Democratic State Senator Tommy Moore, becoming only the third Republican governor in South Carolina to win a second term. Sanford started the campaign with a double-digit edge over Moore and he maintained that lead to election day. During the course of the campaign, Sanford's approval rating averaged in the mid fifties. In Sanford's re-election victory, he also garnered 22% of the African American vote, which was considered very high for a Republican statewide candidate.

The 2010 South Carolina gubernatorial election took place on November 2, 2010. Incumbent Republican Governor Mark Sanford was term limited and unable to seek re-election. Primary elections took place on June 8, 2010 and a runoff election, as was necessary on the Republican side, was held two weeks later on June 22.

The 2002 United States Senate election in South Carolina was held on November 5, 2002. Longtime Republican incumbent Strom Thurmond decided to retire at the age of 100, becoming the first centenarian to ever serve in Congress. At that time, Thurmond was the longest serving Senator in U.S. history, but his record was later surpassed by West Virginia's Robert Byrd. Republican U.S. Representative Lindsey Graham won the open seat, becoming the first non-incumbent Republican Senator from South Carolina since Reconstruction, as Thurmond had been elected as a Democrat, but switched parties in 1964. This was the first open Senate election in South Carolina since 1966.

The 1998 United States House of Representatives elections in South Carolina were held on November 3, 1998, to select six Representatives for two-year terms from the state of South Carolina. The primary elections for the Democrats and the Republicans were held on June 9 and the runoff elections were held two weeks later on June 23. All five incumbents who ran were re-elected and the open seat in the 4th congressional district was retained by the Republicans. The composition of the state delegation remained four Republicans and two Democrats.

Thomas C. Davis is a Republican member of the South Carolina Senate since January 14, 2009. His district includes part of Beaufort County.

The 2014 United States Senate special election in South Carolina took place on November 4, 2014, concurrently with the regular election for the other South Carolina Senate seat. The special-election Senate seat was formerly held by Republican Jim DeMint, who resigned on January 1, 2013 to become president of the Heritage Foundation. Nikki Haley, the governor of South Carolina, announced the appointment of U.S. Representative Tim Scott to fill the seat. Scott ran in the special election and won by beating Democratic candidate and Richland County councilwoman Joyce Dickerson in the November election. This was only the second Senate election since the Seventeenth Amendment in which both major party nominees were black, the third being the 2016 Senate election in which Scott also ran.

The 2020 United States gubernatorial elections were held on November 3, 2020, in 11 states and two territories. The previous gubernatorial elections for this group of states took place in 2016, except in New Hampshire and Vermont where governors only serve two-year terms and elected their current governors in 2018. Nine state governors ran for reelection and all nine won, while Democrat Steve Bullock of Montana could not run again due to term limits and Republican Gary Herbert of Utah decided to retire at the end of his term. 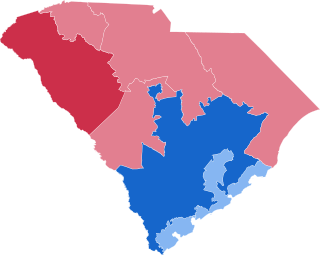 The 2018 United States House of Representatives elections in South Carolina were held on November 6, 2018, to elect the seven U.S. Representatives from the state of South Carolina, one from each of the state's seven congressional districts. The elections coincided with a gubernatorial election, as well as other elections to the House of Representatives, elections to the United States Senate and various state and local elections. The state congressional delegation changed from 6-1 for Republicans to 5-2 for Republicans. The last time Democrats held 2 seats in the state was in 2010.