Thomas Redding (born January 24, 1997) is an American soccer player who plays as a defender.

Born in San Diego, California and growing up in Oviedo, Florida, Redding began his youth career with IMG Soccer Academy and Chicago Magic PSG in the U.S. Soccer Development Academy. His play at the youth level attracted the interest of Orlando City and on March 11, 2014, Redding signed both a USL Pro contract and an MLS contract with Orlando City becoming the club's first ever homegrown player. [1]

On May 14, 2014, Redding made his professional debut with Orlando City in the United Soccer League, starting in a 1–0 victory over Arizona United. [2] He ended the season appearing in 18 matches for the club.

On July 30, 2015, Redding was loaned to Wilmington Hammerheads FC. [3] He only appeared in one match for Wilmington during his brief loan spell. Upon returning, he made his Major League Soccer debut for Orlando City in a 0–0 draw on August 8, 2015 against the Philadelphia Union. [4] On October 3, 2015, Redding was diagnosed with a concussion after colliding with teammate Rafael Ramos during a match against the Montreal Impact. [5] [6]

On January 3, 2018, Redding was traded to New York Red Bulls, along with teammate Carlos Rivas, in exchange for Sacha Kljestan and $150,000 of Target Allocation Money. [11] Redding was loaned to affiliate side New York Red Bulls II during March 2017. On March 17, 2018 he made his first appearance for Red Bulls II, appearing as a starter in a 2–1 victory over Toronto FC II in the opening match of the season. [12] Redding made his first MLS appearance for the Red Bulls on March 31. [13] On August 5, 2018, Redding was placed on season-ending injury reserve after undergoing shoulder surgery. [14] Redding was released by the Red Bulls at the end of their 2018 season. [15]

In January 2019, Redding was a trialist for Columbus Crew SC on their preseason roster. [16]

Redding was named by United States U20 coach Tab Ramos to participate in the 2017 FIFA U-20 World Cup in South Korea, where he played in two of the USA's five matches. [17] 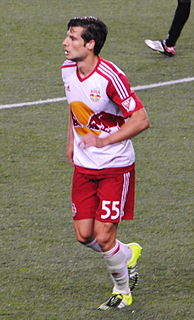 The 2011 Orlando City SC season, marked the club's first season in existence, and their first year in the third-tier USL Pro League. Previously, the club was known as the Austin Aztex FC before they were relocated to Orlando, Florida. They won a double, winning the Commissioner's Cup as the top team in the league's regular season, and winning the USL Pro Championship.

The 2012 Orlando City SC season was the club's second season of existence. It is City's second consecutive year in the third tier of American soccer, playing in the USL Professional Division for their second season. In the 2011 season, Orlando City won the regular season and the playoffs. As of the 1 March 2012, there are approximately 3,500 season ticket holders for the 2012 season. They ended the season with winning the league title for the second consecutive year, but they lost in the Playoffs to the Wilmington Hammerheads in the Semi-final 3–4.

The 2014 Orlando City SC season was the club's fourth season of existence in Orlando, and their final season playing in the lower divisions. A Major League Soccer expansion franchise with the same name began play in 2015. The team entered the season as the defending USL Pro champions, beating Charlotte Eagles in the Championship Game after finishing second in the regular season. 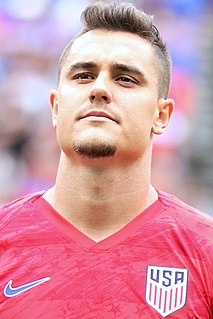 Aaron Ray Long is an American professional soccer player who plays as a center-back for the New York Red Bulls of Major League Soccer and the United States national team. Born in Oak Hills, California, Long played four seasons of college soccer for the UC Riverside Highlanders before being drafted in the second round of the 2014 MLS SuperDraft by the Portland Timbers with the 36th overall pick. After loan spells with USL Pro clubs Sacramento Republic and Orange County Blues, Long was released by the Timbers and subsequently signed by rivals Seattle Sounders.

Bradley Stuver is an American professional soccer player who plays as a goalkeeper for Austin FC of Major League Soccer.

Carlos Augusto Rivas Murillo is a Colombian professional footballer who plays as a forward for Alianza Petrolera.

Emanuel "Manolo" Sánchez is a Puerto Rican retired professional footballer who played as a midfielder.

Daniel James Metzger is an American professional soccer player who plays as a midfielder for Memphis 901 FC in the USL.

Andre Rawls is an American soccer player who plays as a goalkeeper for USL Championship club Phoenix Rising on loan from Colorado Rapids.

Rafael Alejandro Díaz is a Dominican professional footballer who plays as a goalkeeper for USL Championship side Sacramento Republic FC and the Dominican Republic national team.

Daniel Bedoya Velez is a Colombian professional footballer who plays for FC Tucson in USL League One.

Stefano Paolo Bonomo is an American retired soccer player who played as a forward.

The 2016 New York Red Bulls II season is the club's second season of existence, and their second in United Soccer League, the third-tier of the American soccer pyramid. The Red Bulls II play in the Eastern Division of USL.

Florian Valot is a French professional footballer who plays as a midfielder for the New York Red Bulls of Major League Soccer.

Benjamin Mines is an American soccer player who currently plays in MLS for FC Cincinnati. 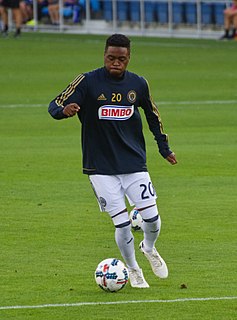 Roderick Marcus Epps is an American soccer player who currently plays as a winger for San Antonio FC in the USL Championship.