Red Bull New York II were founded on January 21, 2015, when the New York Red Bulls acquired the rights to start a USL club. Red Bulls II competes in the second tier of American soccer and serves as a reserve side for the first team as well as a developmental stage for young prospects and academy players. The club follows in the footsteps of many MLS clubs who created USL sides to help promote youth development throughout the nation. [2]

It was announced on March 2, 2015, that former MetroStars and Red Bulls player, John Wolyniec would be the club's new head coach. Wolyniec previously served as an assistant coach to the senior team and the academy. Former Red Bulls defender, Ibrahim Sekagya will also serve on his coaching staff. [3]

On March 19, 2015, the soccer club announced the signing of their first-ever player, and former academy standout, Tyler Adams. [4] Following their first signing, the club's first roster consisted of senior team players who were loaned down, draft picks, academy players and local trialists. [5] A week later, on March 28, the club played in their inaugural match, drawing 0–0 against the Rochester Rhinos. [6] Senior team loanee, Anatole Abang scored the club's first ever goal in a 4–1 victory against Toronto FC II, marking the first victory in club history. [7]

After spending the majority of the 2015 and 2016 season playing at Red Bull Arena, the club announced on May 10, 2016 that their new home field would be at Montclair State University's MSU Soccer Park at Pittser Field starting in 2017. [9]

The club won their first ever trophy [10] on September 7, 2016 claiming the Regular Season Title (the equivalent of the Supporters' Shield) 4–1 victory at Harrisburg City Islanders. [11] On October 23, Red Bulls II won their first USL Cup after a 5–1 victory against Swope Park Rangers at Red Bull Arena. [12]

For the abbreviated 2020 USL Championship season, due to the global COVID-19 pandemic, Red Bulls II are playing home matches at Red Bull Arena with no fans in attendance. [13]

The New York Red Bulls U-23 is an American soccer team based in Harrison, New Jersey. Founded in 2009, the team plays in USL League Two, a national amateur league at the fourth tier of the American Soccer Pyramid. It is part of the official Development Academy of Major League Soccer's New York Red Bulls.

The New York Red Bulls Academy is the multi-layered youth system of the New York Red Bulls. It is the first cost-free program in Major League Soccer that provides a professional soccer training environment for youth players in the New York Tri-State. The soccer programs are operated as part of a global approach to player development.

Ryan Meara is an Irish professional soccer player who plays as a goalkeeper for the New York Red Bulls of Major League Soccer. 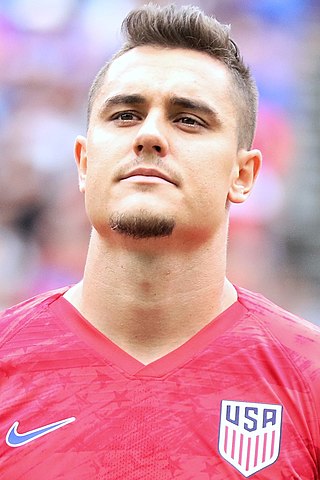 Aaron Ray Long is an American professional soccer player who plays as a center-back for the New York Red Bulls of Major League Soccer and the United States national team. Born in Oak Hills, California, Long played four seasons of college soccer for the UC Riverside Highlanders before being drafted in the second round of the 2014 MLS SuperDraft by the Portland Timbers with the 36th overall pick. After loan spells with USL Pro clubs Sacramento Republic and Orange County Blues, Long was released by the Timbers and subsequently signed by rivals Seattle Sounders FC.

Thomas Redding is an American soccer player who plays as a defender.

Daniel James Metzger is an American professional soccer player who plays as a midfielder.

Tyler Shaan Adams is an American professional footballer who plays for Premier League club Leeds United and captains the United States national team. Primarily a midfielder, Adams is capable of playing as a fullback or winger on either side of the defense or midfield.

Rafael Alejandro Díaz is a Dominican professional footballer who plays as a goalkeeper for the Dominican Republic national team.

Stefano Paolo Bonomo is an American retired soccer player who played as a forward.

Derrick Burckley Etienne Jr. is a professional footballer who plays as a winger for Major League Soccer club Atlanta United. Born in the United States, he represents the Haiti national team. 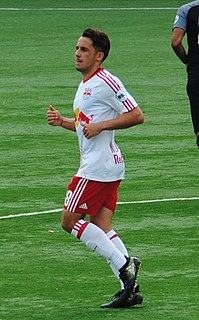 Vincent Bezecourt is a French footballer who plays as a midfielder for Geylang International. 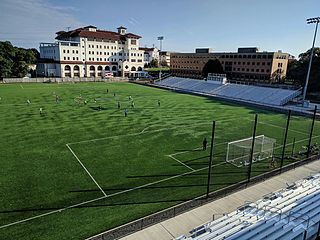 Rece Buckmaster is an American soccer player who currently plays for Memphis 901 in the USL Championship.

Caden Christopher Clark is an American professional soccer player who plays as an attacking midfielder for Bundesliga club RB Leipzig.

Wikimedia Commons has media related to New York Red Bulls II .
This page is based on this Wikipedia article
Text is available under the CC BY-SA 4.0 license; additional terms may apply.
Images, videos and audio are available under their respective licenses.