The Ghana Football Association (GFA) is the governing body of association football in Ghana, based in Accra. [2] [3] Founded in 1957, [2] the association was dissolved with "immediate effect", according to Minister of Sport, Isaac Kwame Asiamah, on 7 June 2018, after the uncovering of a corruption scandal. [4] In October 2019, a new president, Kurt Okraku, was elected and the association reconvened upon the completion of the work of the FIFA Normalization Committee. [5] Mark Addo was elected vice president in November 2019. [6]

The Ghana Football Association (GFA) is the successor to the Gold Coast Football Association, which used to be the governing body for football in Ghana and was one of the oldest football associations in Africa, having been founded in 1920. Records indicate that Cape Coast and Accra were the first colonial cities in sub-Saharan Africa to host formal leagues in the Gold Coast. After a weak start in 1915, the league kicked off in 1922 with the Accra Hearts of Oak Sporting Club emerging as winners, taking the coveted Guggisberg shield – named after the progressive British governor of that period and the man who started the Accra Football League, Sir Gordon Guggisberg.[ citation needed ]

Football was brought to the Gold Coast near the end of the 19th century by merchants from Europe, who had by then conquered the coastal areas and built forts and castles to facilitate trade. In their leisure time, the sailors would play football among themselves and with the indigenous people.

The popularity of the game spread quickly along the coast, culminating in the formation of the first football club, Excelsior, in 1903 by Mr. Briton, a Jamaican-born British citizen who was the then Head Teacher of Philip Quaque Government Boys School in Cape Coast. As the popularity of the game grew, other amateur clubs were formed along the coast, including: Accra Hearts of Oak, Accra Standfast, Cape Coast Venomous Vipers, Cape Coast Mysterious Dwarfs, Sekondi Hasaacas, and Sekondi Eleven Wise.

As the popularity of the game spread throughout the country, the existing clubs met towards the end of 1930 and elected Richard Maabuo Akwei as their chairman.

Towards the middle of 1950, the clubs, spearheaded by Ohene Djan, accused Akwei of maladministration and questioned his ability to help grow Ghanaian Football. They therefore addressed petitions to the Governor of the Gold Coast, Sir Charles Arden-Clarke, and the Pioneer Sports Organizer, Joseph Ranadurai, on the maladministration of the Amateur Football Association by Akwei. While the petition was being addressed, Ohene Djan led a "Football Revolution" and succeeded in toppling the Akwei Administration in 1957.

Djan was instrumental in securing sponsorship for the first Ghanaian FA cup competition from a pharmaceutical firm, Merrs R.R. Harding and Company. In the same year he succeeded in securing the services of an expatriate Coach, George Ainsley, for the National Team. Then in 1959, he succeeded again in organizing the first national league, before Ghana became a republic on 1 July 1960.

Through the 1993 Winneba Declaration, Ghanaian football was able to shrug off its amateur status. The formation of professional teams allowed clubs to be incorporated under the companies code (Act 179, 1963) as Limited liability companies.

The Association was dissolved 'with immediate effect' on 7 June 2018, after undercover journalist Anas Aremeyaw Anas revealed the amount of corruption in the association and Ghanaian football in general. Referees and officials of the association were filmed taking bribes. [4] The Sports Minister Isaac Kwame Asiamah referred to Kwesi Nyantakyi on Accra-based JoyFM as "former president" because all arms and affiliates of the GFA stand dissolved. Due to that the 2018 Ghanaian Premier League was cancelled. The GFA is set to reopen in August 2019.

Elections were held in October 2019 and out of the six candidates who contested, Kurt Okraku emerged the winner. [7] In November 2019, the Women's League Committee was put together. The team was made up of Hilary Boateng (Chairperson), Rosalind Amoh (Vice chairperson), Nana Aba Anamoah, Cleopatra Nsia, Jerry Dogbatse, Nana Poku Fosu Geabour II and Christian Isaac Mensah. [8] In January 2020, Prosper Harrison Addo was appointed the General Secretary. [9] It was announced in early January that the technical crew of all the national teams had been disbanded. This was done with the intention of giving the sport a fresh start and enhancing the performance of the teams. [10] [11] Pursuant to the disbanding, Mercy Efua Tagoe-Quarcoo and Charles Kwabla Akonnor were appointed head coaches of the Black Queens and Black Stars respectively. Mercy Tagoe-Quarcoo was assisted by Charles Anokye Frimpong and Charles Akonnor by David Duncan. [12] [13] The National Teams Department was added to the outfit of GFA and Mr Alex Asante who is a Deputy General Secretary was appointed as its acting head. [14] In September 2020, the Court of Arbitration for Sport dismissed an appeal by Wilfred Kwaku Osei Palmer which, amongst others, sought to nullify the Ghana Football Association presidential elections conducted in October 2019. [15]

In October 2020 the GFA signed an agreement with Decathlon Ghana, making the latter the official retail partner for Black Stars kits and equipment as well as other merchandising products. [16]

The Africa Cup of Nations

The Ghana Amateur Football Association was affiliated with CAF in 1960, [1] and in 1963 won the bid to host the 5th Africa Cup of Nations, to coincide with the Meeting of the (OAU) Heads of States and Government in Accra. Ghana won the trophy and went ahead again to successfully defend it in Tunisia in 1965.

Although the team did not qualify for the senior FIFA World Cup until 2006, Ghana has enjoyed tremendous success at the youth level, winning the FIFA World Under-17 title twice and finishing runner-up twice. Ghana has also finished second at the FIFA World Youth Championship twice.

Ghana became the first African country to win a medal in Football at the 1992 Summer Olympics.

In 2009, Ghana became the first African country to win the U-20 FIFA World cup by defeating Brazil. [17]

With regard to women's football, the Ghana Black Queens have participated in two World Cup tournaments and the Olympic Games. They have also been runners-up to the Falcons of Nigeria in the Africa Cup of Nations series.

Ghana qualified for the African Cup of Nations Tournament in January 2017 after finishing top of Group H in the qualifying stages. [18]

An undercover investigation led by The Telegraph and Channel 4 accused Kwesi Nyantaky and other officials of the Ghana Federation of match-fixing. According to this information, the accusations involve just the international friendlies – thus, the World Cup matches wouldn't be affected by the suspicions. [19] Kwesi Nyantakyi denied the match fixing allegations, saying: "the report of the newspaper or the media house is entirely not accurate." and "There is really no cause for alarm as far as I am concerned, because nothing untoward has happened involving me or the Federation". [20] 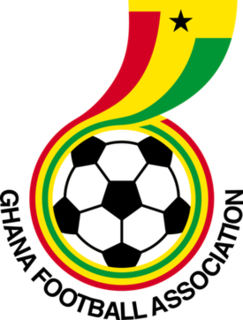 The Ghana national football team represents Ghana in men's international football and has done so since the 1950s. The team consists of twenty players including the technical team. The team is nicknamed the Black Stars after the Black Star of Africa in the flag of Ghana. It is governed by the Ghana Football Association, the governing body for football in Ghana and the oldest football association in Africa. Prior to 1957, the team played as the Gold Coast. The team is a member of both FIFA and CAF.

Charles Kwabla Akonnor is a former Ghanaian international footballer who is the current manager of the Ghana national team. He played as a versatile midfielder, mostly in Germany.

Asante Kotoko Sporting Club, also known as Asante Kotoko, is a professional football club from Kumasi, Ashanti Region in Ghana West Africa. Their home grounds is based at Baba Yara Stadium in Amakom, Kumasi. They compete in the Ghanaian Premier League. They have been champions of the Ghana Premier League a record 24 times, have won the CAF Champions League twice and were adjudged the African club of the century by International Football Federation of History and Statistics. They are also called the Porcupine Warriors.

The Ghana women's national football team represents Ghana in international women's football. It is governed by the Ghana Football Association. Its players are known as the Black Queens. 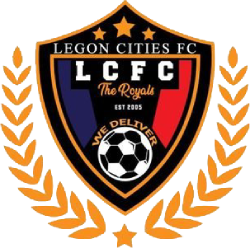 Legon Cities FC is a football club from Ghana currently based in Accra, Greater Accra. The club won the 2016 Ghanaian Premier League.

Nania F.C. is a Ghanaian professional football club based in Legon, Greater Accra. They are a currently competing in the Division One League.

Ghana is a country with a rich heritage in sports.

Real Republicans Football Club were a Ghanaian association football club based in the capital, Accra, along with Hearts of Oak, one of the most successful Ghanaian clubs in recent years. It was claimed it held Ghana's record for the most consecutive wins, four. The club claimed it formed the core of the national team, Ghana Black Stars.

Ohene Djan was a Ghanaian sports administrator. Ohene Djan was the First Director (Minister) of Sports of Ghana at the Central Organisation of Sports (COS) and was also vice-president of the Confederation of African Football.

Kwesi Nyantakyi is a Ghanaian banker and a lawyer, controlist and former football administrator. He was the president of the Ghana Football Association (GFA) from 30 December 2005 until 7 June 2018. Nyantakyi officially resigned a day later. However, four hours to the release of his resignation letter FIFA had issued a statement announcing his ban from all football related activities for a period of 90 days pending investigations. Circumstances surrounding his resignation include a video released by investigative journalist Anas Aremeyaw Anas in which Nyantakyi was found taking a bribe and purporting to have the ability to "take over the whole country". In an interview with Super Sports South Africa a few days after the video of the investigation was slated to go public, Nyantakyi denied any wrongdoing regarding match fixing. On 30 October 2018 FIFA officially issued a statement that officially bans Kwesi Nantakyi from football related activities for life. In October 2020, the ban was reduced to 15 years after a reconsideration by the Court of Arbitration for Sport.

Number 12: When Greed and Corruption Become the Norm is an investigative documentary by Ghanaian award-winning journalist Anas Aremeyaw Anas and his investigative group, Tiger Eye P. I.

Kurt Edwin Simon Okraku is a Ghanaian football administrator who serves as the President of the Ghana Football Association since October 2019. He is a former sports journalist and past Executive Chairman of Dreams F.C., where Ghana Black Stars and Chelsea F.C. player Baba Rahman played. He also served on various executive committees of the Ghana Football Association as well as the national team, Ghana Black Stars.

Dan Kwaku Yeboah is a Ghanaian broadcast journalist and former spokesperson for the Ghana Football Association during the period of the FIFA Normalisation Committee. He is also the Head of Sports for Despite Media Group who owns Ghanaian media giants Peace FM.

Kojo Bonsu is a Ghanaian businessman, sports administrator and politician, who served as the Metropolitan Chief Executive (MCE) of the Kumasi Metropolitan Assembly (KMA) doubling as the Mayor of Kumasi from 2013 to 2016. He is a member of the National Democratic Congress.

Samuel Paa Kwesi Fabin is a Ghanaian professional football manager. He is the current coach of the Ghana national U-23 team. He is a former coach Ghana Premier League teams; Asante Kotoko S.C, Accra Hearts of Oak S.C. and Aduana Stars F.C. He previously coached the Ghana national U-17 team leading them to 2nd place in the 2017 Africa U-17 Cup of Nations.