Phoenix Rising Football Club is an American professional soccer team based in Phoenix, Arizona. Founded in 2014 as Arizona United Soccer Club, the team is a member of the USL Championship, the second tier of the American soccer league system.

In just 178 days after the franchise was awarded by the USL Pro, Arizona United hired a front office staff and coach, put together a roster, secured a stadium, played 28 regular season games, reached the fourth round of the US Open Cup and was in contention for a playoff spot until the next-to-last week of the season. [6] [7]

United won four of their last five games to move up from 13th place to 9th, but fell four points short of qualifying for the playoffs. Jonathan Top and ex-Orlando City standout Long Tan led the team in scoring with five goals each. Tan was also selected for the All-League Second Team. [16] Goalkeeper Evan Newton was second in the league in saves. United finished with a 10–13–5 record. [6]

In their first US Open Cup appearance, Arizona United lasted until the fourth round, the longest Open Cup run of any Arizona club. Entering the tournament in the second round, United defeated Portland Timbers U23s of the PDL 3–2 in Portland on May 13. They were losing 2–1 late in the game when London Woodberry tied the game in the 88th minute and Daniel Antúnez scored the winning goal with seconds left in stoppage time. [17] [18] [19] In the third round, United defeated Oklahoma City Energy FC of USL Pro 2–1 in extra time May 28 at the Peoria Sports Complex. The game winner was scored by Bradlee Baladez in the 112th Minute and Evan Newton saved a last minute penalty kick awarded to the Energy. [20] [21] [22] Their Open Cup run ended with a 2–1 loss to the eventual MLS Cup champion LA Galaxy at home on June 18. Gyasi Zardes scored two goals in the second half two minutes apart after Matt Kassel gave United a 1–0 lead at halftime. [23] [24] [25]

Arizona United signed a one-year agreement to play their home games at Scottsdale Stadium on December 16, 2014. [26] United signed a one-year affiliation agreement with FC Dallas on February 9, 2015. [27] [28] [29] United finished 10th in the Western Conference with a 10–16–2 record. Goalkeeper Carl Woszczynski set a USL record with 130 saves. Long Tan again led the team with 14 goals, which was tied for 4th in the league with Luke Vercollone. Tan was also selected for the USL All-League First Team. [30] On September 25, the club declined to extend the contract of Head Coach Michael Dellorusso. [31]

Brett M. Johnson, founder and CEO of Benevolent Capital and Managing Director of Zealot Networks, purchased a minority share of the team. He was named Co-Chairman and President of Arizona United on December 9, 2015. [32] [33] Frank Yallop, who coached the San Jose Earthquakes to MLS Cup championships in 2001 & 2003, was signed to a three-year contract as Head Coach and President of Soccer Operations on December 23, 2015. [34] [35] [36] An investment group of music artists and executives led by Grammy Award winning DJ, record producer and rapper/songwriter Diplo purchased a minority stake in Arizona United on January 27, 2016. [37] [38] Scottsdale Stadium did not renew their lease with United and the team signed a three-year lease with their original stadium, Peoria Sports Complex, on January 26, 2016. [39] Pete Wentz, bassist for the rock group Fall Out Boy, purchased a minority share on April 11, 2016. [40]

In the second half of the season, the Rising won 11 games, tied 3 and lost only one. This included 11 straight games without a loss with a five game winning streak, both team records. Jason Johnson lead the team with 13 goals. Didier Drogba scored 9 goals, even though he was out for a few weeks with a groin injury. During the unbeaten streak, goalkeeper Josh Cohen earned 6 shutouts in 8 games, which gave him the USL Player of the Month award for September.

The Rising clinched their first ever playoff berth by defeating the Portland Timbers 2 on September 27 by a 2–0 score. Their record was 17 wins, 8 losses and 7 ties, earning them 5th place in the Western Conference. A penalty kick shootout won by Swope Park Rangers eliminated Phoenix after playing to a 1–1 tie. The game was interrupted by lightning and heavy rains after the first half, so the second half was played the following day. [65]

From May 5 to September 14, 2019, Phoenix Rising FC won 20 consecutive matches—setting a League and North American record for the longest winning streak. [75] [76] The streak ran parallel with another streak of home wins during the club's "Dollar Beer Night" promotion, which dates back to 2017. [77] The streak came to an end on September 21 with a 2-1 loss to Fresno FC. Rising FC earned the USL Championship Regular Season Title on September 28 after playing New Mexico United to a 2-2 draw. [78] [79] [80]

Phoenix Rising called the Peoria Sports Complex home during the 2014 and 2016 seasons. They played at Scottsdale Stadium during the 2015 season. In 2017, a soccer-specific stadium was constructed, the Phoenix Rising Soccer Complex, in time for the 2017 season. [48] On March 15, 2019, Casino Arizona signed a sponsorship deal with Rising FC, including naming rights to the stadium. It was renamed Casino Arizona Field. [83]

Where a player has not declared an international allegiance, nation is determined by place of birth. Squad correct as of March 6, 2020. [84]

KASW-61, The CW affiliate in Phoenix, signed a deal to broadcast 35 Phoenix Rising games including every USL Championship match home and away, starting in 2019. [91] [92] Games are also streamed live on ESPN3. Josh Eastern does play-by-play and Devon Kerr provides analysis. The Rising Halftime Show is produced by KASW's sister station KNXV-15 and is hosted by Craig Fouhy.

There are two main independent supporters groups of Phoenix Rising FC, Los Bandidos Football Firm [95] and The Red Fury. [96] Both groups stand in the supporters section behind the south goal of the stadium. 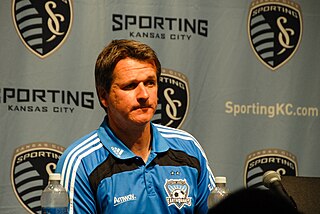 Expansion of Major League Soccer has occurred several times since the league began play in 1996. Major League Soccer was established as the top level of professional soccer in the United States in 1993 with 10 teams and began play in 1996. It has expanded several times since 1998 into new markets across the United States and, since 2006, into Canada. 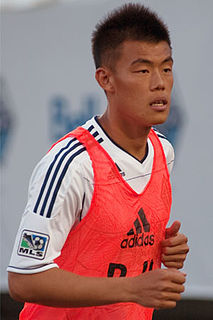 Tan Long, former name Tan Xin, is a Chinese footballer who currently plays for Changchun Yatai in the China League One.

Orange County Soccer Club is an American soccer team based in the Orange County, California suburb of Irvine. Founded in 2010 as the Los Angeles Blues, the team currently plays in the second tier USL Championship.

FC Tucson is an American soccer club based in Tucson, Arizona that plays in USL League One and WPSL. Organized in 2010, the club first fielded a team in March 2011, then joined the Premier Development League Western Conference in 2012.

The Visit Tucson Sun Cup (formerly the Desert Cup, the Desert Diamond Cup and the Mobile Mini Sun Cup, is a preseason soccer tournament hosted by Phoenix Rising FC of the USL Championship and FC Tucson of USL League One. The tournament is sponsored by the Tucson Convention and Visitors Bureau, known as Visit Tucson.

Orlando City Soccer Club is an American professional soccer club in Orlando, Florida, that competes as a member of the Eastern Conference in Major League Soccer (MLS). Orlando City SC began play in 2015 as the 21st franchise in MLS, succeeding the USL Pro team of the same name. In doing so they became the first MLS team in Florida since Miami Fusion and Tampa Bay Mutiny both folded following the 2001 season. The team plays at Exploria Stadium in Downtown Orlando.

Phoenix FC was an American professional football (soccer) team based in Phoenix. The team was a member of the USL Professional Division, the third tier of the American Soccer Pyramid. The team's colors were red and white.

Alec John "A. J." Cochran is an American professional soccer player who plays as a defender for Phoenix Rising FC.

Louisville City Football Club is an American professional soccer club based in Louisville, Kentucky. The team plays in the USL Championship, known through the 2018 season as the United Soccer League (USL), which is currently the second tier of the American soccer pyramid.

The Western Conference is one of two conferences in USL Championship soccer. 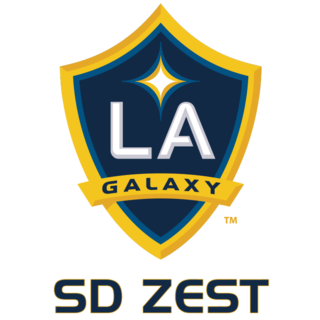 San Diego Zest FC is an American soccer team in San Diego, California, United States. The club was founded in 2016 and is owned and operated by San Diego Sports Authority, a Japanese-owned sports management company. They compete as LA Galaxy SD Zest in USL League Two and play their home matches at James Madison High School's George Hoagland Stadium. The team colors are Orange and Navy.

Nashville Soccer Club was an American professional soccer team based in Nashville, Tennessee. Founded in 2016, the team made its debut in the USL Championship in 2018.

The 2017 Orlando City SC season was the club's seventh season of existence in Orlando, and third season in Major League Soccer, the top-flight league in the United States soccer league system. The team opened the season with a 1–0 win over New York City FC, at the newly-completed Orlando City Stadium.

Casino Arizona Field, formerly known as Phoenix Rising Soccer Complex, is a 15.8-acre soccer-specific training and stadium facility located in the Salt River Pima–Maricopa Indian Community near Tempe, Arizona. It is the home of Phoenix Rising FC of the USL Championship. The complex has a 6,200-seat temporary stadium with luxury suites, separate training field, and parking area and is privately funded.

Nashville Soccer Club is a Major League Soccer team based in Nashville, Tennessee. The team began play in the league in 2020 as a continuation of the USL club of the same name and plays its home matches at Nissan Stadium with intention to move to the Nashville Fairgrounds, in a planned 27,500-seat soccer-specific stadium, to be constructed in the near future. It is principally owned by John Ingram, owner of Ingram Industries, along with investors and partial owners the Turner family of Dollar General Stores and the Wilf family.

The 2018 USL season was the eighth season of the United Soccer League and second under Division II sanctioning. The previous season, the USL had provisional Div. II sanctioning from the United States Soccer Federation along with the North American Soccer League, but was given full sanctioning for the 2018 season with a two-year deadline to meet the full requirements set by U.S. Soccer.