Tommy Wind is a magician from Staten Island in New York City. He has performed in many of his own original shows, combining illusion with rock and roll music, in New York City, Atlantic City, New Jersey, and Las Vegas, Nevada.

Tommy began his career when he was only 7 after his grandfather introduced him to magic by showing him the disappearing hanky trick. [1] He has appeared in TV shows including Criss Angel's "Mindfreak" and NBC's "I Do!", [1] and also performed in the Masters of Illusion Live show at Bally’s Hotel and Casino, and in 25 episodes of the TV counterpart. [2] [3]

In 2009, Wind received an award for Best Teen Magician from the World Magic Awards. [4] [2] In 2016, Wind won the Merlin Award for Best Family Friendly Magic Show in the World. [5] 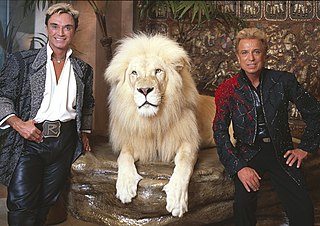 Siegfried & Roy were a duo of German-American magicians and entertainers, best known for their appearances with white lions and white tigers. It was composed of Siegfried Fischbacher and Roy Horn.

MAGIC, also known as The Magazine for Magicians, was an independent magazine for magicians that was based in Las Vegas, Nevada. A creation of Stan Allen, it debuted in September 1991, with its first issue featuring Lance Burton on the cover, and over the years it also featured David Copperfield, Siegfried & Roy, Penn & Teller, Mike Caveney, and Mac King. Its final issue was #301, November 2016.

Christopher Nicholas Sarantakos, known by the stage name Criss Angel, is an American magician, illusionist and musician. Angel began his career in New York City, before moving his base of operations to the Las Vegas Valley. He is known for starring in the television and stage show Criss Angel Mindfreak and his previous live performance illusion show Criss Angel Believe in collaboration with Cirque du Soleil at the Luxor casino in Las Vegas. The show generated $150 million in tourist revenue to Las Vegas in 2010, but has since been replaced by Mindfreak LIVE! on 11 May 2016. He also starred in the television series Criss Angel BeLIEve on Spike TV, the reality-competition television show Phenomenon on NBC, and the 2014 stage show Criss Angel Magicjam.

Quick-change is a performance style in which a performer or magician changes attire quickly within seconds from one costume into another costume in front of the audience.

Val Valentino is an American magician. Valentino starred in a series of four television specials exposing the methods behind numerous classic magic tricks and illusions on the Fox network. In the specials, he used the stage name the Masked Magician and concealed his true identity by wearing a mask with a squid like design, being aware of the stigma amongst the magic community with publicly exposing tricks. As the finale to the final special, Valentino revealed his identity as the masked magician, garnering some notoriety amongst the magic community, and instigating several lawsuits.

Paul Draper is an anthropologist, academic, and an award winning mentalist, magician, and film maker. As an anthropologist and communications expert specializing in the cognitive science of religious beliefs, he has lectured at fortune 500 companies and universities. As the creator of the show Mental Mysteries, Draper blends his academic background as an anthropologist and communications expert with the arts of mentalism and magic. A decade into his magic career, he received the Merlin Award for his work as a corporate entertainer. Draper has been described as a pioneer in the field of live online magic shows, regularly performing live streaming shows during the 2020 COVID-19 pandemic with viewing audiences of thousands of people. 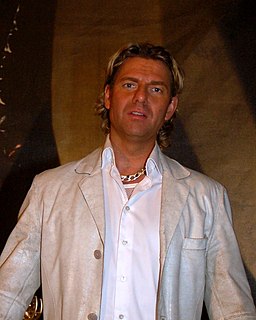 Steve Wyrick is an American magician from Garland, Texas. Wyrick is best known for performing as a headliner in Las Vegas, Nevada for more than 15 years, having starred at Planet Hollywood Resort/Casino, Aladdin Casino, Sahara Casino, and at the Las Vegas Hilton. He was featured in The World's Greatest Magic series on NBC in the 1990s. Awards include the prestigious Merlin Award as Magician of the Year for the International Magicians Society, the world's largest magic organization. Wyrick also headlined for multi-month performances in Atlantic City at Harrah's Casino and at the Golden Nugget Resort

Marco Tempest is a Swiss magician based in New York City. He is known for his multimedia magic and use of interactive technology and computer graphics in his illusions and presentations. He stars in the eight-part television series The Virtual Magician which has been broadcast in over 50 countries.

Melinda Saxe is a magician from Las Vegas, Nevada, best known for her television performances and Las Vegas stage shows in which she was billed as "The First Lady of Magic". She is often associated with the "Drill of Death" illusion, which was a signature trick developed for her by André Kole. Although derided by some critics as a stereotypical blonde who achieved success because of her looks, Saxe is also respected by many in the magic business as a highly professional and likeable performer. She is currently on a break and not performing.

Peter Marvey is a magician and illusionist best known for his combination of sleight of hand and large-scale stage illusions.

Daniel White is an American magician, producer, and creative consultant. In March 2015, White began performing a headline show produced by theory11 at The NoMad Hotel in New York City, titled "The Magician at The NoMad." The critically acclaimed show has been featured in Vanity Fair, Wall Street Journal, and 12 times on The Tonight Show with Jimmy Fallon.

Morgan Strebler is an American psychological illusionist, actor, director, writer and producer. Strebler started practicing magic at the age of seven after seeing a live Harry Blackstone Jr. performance. As an adult, Strebler started his acting career and moved to Las Vegas where he started construction on his multimillion-dollar illusion show. Some of his earliest acting roles inculcated Sesame Street and at 17 he was on the Young and the Restless and Guiding Light.

Rob Lake is an American magician and illusionist known for his original grand illusions and elaborate theatrical interactive performances. Rob Lake was a quarter-finalist on America's Got Talent in 2018. Rob has performed his illusion shows all over the USA, Japan, Australia, Europe, Guam, and Thailand. He currently performs his show on television, in casinos, and theaters around the world.

Joel Ward an American magician, actor, comedian, and TV personality. Ward has been a guest on "The Tonight Show" and "The Bonnie Hunt Show". He also tours regularly with a comedy & magic show.

Mat Franco is an American magician and the winner of the ninth season of America's Got Talent. Franco rose above hundreds of thousands of acts to become the first magician in history to win, including the $1 million prize. Best known for his personality-driven, sleight-of-hand style of magic, Mat Franco's TV specials marked the first time NBC produced a spin-off show around their AGT winner. Franco is currently headlining in at The LINQ Hotel and Casino at the Mat Franco Theatre in Las Vegas. In addition to winning awards including "Best Magic Show" "Best Performance Venue" "Best Production Show" in the Best of Las Vegas Awards sponsored by the Las Vegas Review Journal, Franco's live production show currently rates highest among all magic shows in Las Vegas according to user reviews on Vegas.com, Trip Advisor and Ticketmaster.