Wren was unseated, 54-46 percent, in the November 4, 2014 general election by the Republican Michelle Gray of Melbourne. The district includes Izard, Independence, Sharp, and Stone counties.

Wren is affiliated with the American Farm Bureau Federation.

Sir Christopher Wren PRS FRS was one of the most highly acclaimed English architects in history, as well as an anatomist, astronomer, geometer, and mathematician-physicist. He was accorded responsibility for rebuilding 52 churches in the City of London after the Great Fire in 1666, including what is regarded as his masterpiece, St Paul's Cathedral, on Ludgate Hill, completed in 1710. 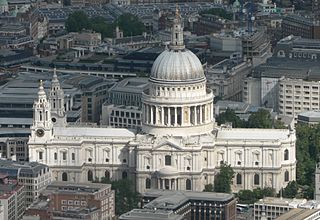 St Paul's Cathedral is an Anglican cathedral in London, United Kingdom, which, as the cathedral of the Bishop of London, serves as the mother church of the Diocese of London. It sits on Ludgate Hill at the highest point of the City of London and is a Grade I listed building. Its dedication to Paul the Apostle dates back to the original church on this site, founded in AD 604. The present cathedral, dating from the late 17th century, was designed in the English Baroque style by Sir Christopher Wren. Its construction, completed in Wren's lifetime, was part of a major rebuilding programme in the City after the Great Fire of London. The earlier Gothic cathedral, largely destroyed in the Great Fire, was a central focus for medieval and early modern London, including Paul's walk and St Paul's Churchyard being the site of St Paul's Cross.

Wrens are a family of brown passerine birds in the predominantly New World family Troglodytidae. The family includes 88 species divided into 19 genera. Only the Eurasian wren occurs in the Old World, where, in Anglophone regions, it is commonly known simply as the "wren", as it is the originator of the name. The name wren has been applied to other, unrelated birds, particularly the New Zealand wrens (Acanthisittidae) and the Australian wrens (Maluridae).

Williamston is a town in Anderson County, South Carolina, United States. The population was 3,934 at the 2010 census. 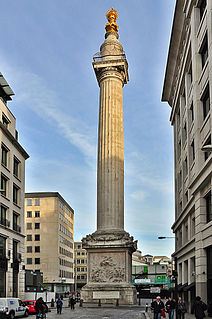 The Monument to the Great Fire of London, more commonly known simply as the Monument, is a Doric column in London, England, situated near the northern end of London Bridge. Commemorating the Great Fire of London, it stands at the junction of Monument Street and Fish Street Hill, 202 feet (62 m) in height and 202 feet west of the spot in Pudding Lane where the Great Fire started on 2 September 1666. Constructed between 1671 and 1677, it was built on the site of St Margaret, New Fish Street, the first church to be destroyed by the Great Fire. It is Grade I listed and is a scheduled monument. Another monument, the Golden Boy of Pye Corner, marks the point near Smithfield where the fire was stopped. 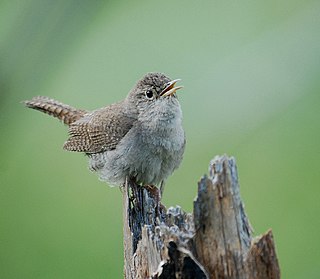 The house wren is a very small songbird of the wren family, Troglodytidae. It occurs from Canada to southernmost South America, and is thus the most widely distributed native bird in the Americas. It occurs in most suburban areas in its range and it is the single most common wren. Its taxonomy is highly complex and some subspecies groups are often considered separate species. 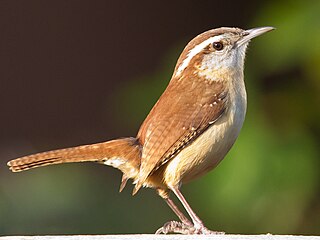 The Carolina wren is a common species of wren that is a resident in the eastern half of the United States of America, the extreme south of Ontario, Canada, and the extreme northeast of Mexico. Severe winters restrict the northern limits of their range while favorable weather conditions lead to a northward extension of their breeding range. Their preferred habitat is in dense cover in forest, farm edges and suburban areas. This wren is the state bird of South Carolina.

Lyall's wren or the Stephens Island wren was a small flightless passerine belonging to the family Acanthisittidae, the New Zealand wrens. It was once found throughout New Zealand, but when it came to the attention of scientists in 1894, its last refuge was Stephens Island in Cook Strait. Often claimed to be a species driven extinct by a single creature, the wren in fact fell victim to the island's numerous feral cats. The wren was described almost simultaneously by both Walter Rothschild and Walter Buller. It became extinct shortly after.

Wren Day, also known as Wren's Day, Day of the Wren, or Hunt the Wren Day, is celebrated on 26 December, St. Stephen's Day in a number of countries across Europe. The tradition consists of "hunting" a fake wren and putting it on top of a decorated pole. Then the crowds of mummers, or strawboys, celebrate the wren by dressing up in masks, straw suits, and colourful motley clothing. They form music bands and parade through towns and villages. These crowds are sometimes called the wrenboys. 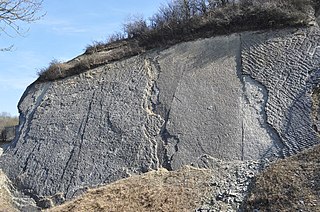 The Wren's Nest is a geological Site of Special Scientific Interest in the Dudley Metropolitan Borough, north west of the town centre of Dudley, in the West Midlands of England. It is one of the most important geological locations in Britain. It is also a Local Nature Reserve, a national nature reserve (NNR) and Scheduled Ancient Monument. The site is home to a number of species of birds and locally rare flora, such as Small Scabious, Milkwort and Quaking Grass. The caverns are also a nationally important hibernation site for seven different species of bat. 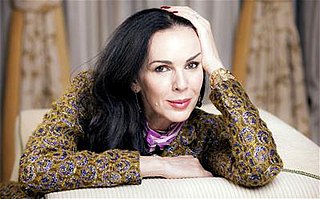 Wren High School (WHS) is a public high school in Anderson School District One in Anderson County, South Carolina, United States. It is accredited by the Southern Association of Colleges and Schools.

Franklin E. Wren is an American front office executive in Major League Baseball. He began his baseball career as a minor league player for the Montreal Expos and later joined the team as an executive. Wren moved to the Florida Marlins in 1991, then was hired by the Baltimore Orioles in 1998 for his first stint as a general manager. After the season, Wren was hired by the Atlanta Braves. The Braves promoted Wren to general manager in 2007, a role he kept until 2014. He joined the Boston Red Sox in September 2015.

The southern emu-wren is a species of bird in the Australasian wren family, Maluridae. It is endemic to Australia. Its natural habitats are temperate forests and Mediterranean-type shrubby vegetation.

Holborn Circus is a junction of five highways in the City of London, on the boundary between Holborn, Hatton Garden and Smithfield. It was designed by the engineer William Haywood and opened in 1867. The term circus describes the way the frontages of the buildings surrounding the junction curve round in a concave chamfer.

RNLB Aguila Wren is a retired Liverpool-class lifeboat of the Royal National Lifeboat Institution. She is currently being restored to her original RNLI condition, with work expected to be complete in 2017 or 2018. Aguila Wren was built as a memorial to 22 members of the Women's Royal Naval Service (WRNS) who were killed when their transport ship to Gibraltar, the Yeoward Line ship SS Aguila, was sunk by German submarine U-201 in the North Atlantic in 1941.