Tongling Nonferrous Metals Group Holdings Company Limited is a state-owned enterprise involving in extracting copper resources and smelting copper and other non-ferrous metals. It was founded in 1949 in Tongling, Anhui, China and it was put into production in 1952. It is one of the largest copper smelting companies in the country. [3] [4] [5] [6]

Vedanta Limited, formerly known as Sesa Sterlite/Sesa Goa Limited, is a mining company based in India, with its main operations in iron ore, gold and Aluminium mines in Goa, Karnataka, Rajasthan and Odisha. It is 50% owned by Vedanta Resources and 50% owned by other entities including the public, mutual funds and foreign investors.

La Générale des Carrières et des Mines (Gécamines) is a Congolese commodity trading and mining company headquartered in Lubumbashi, in the Katanga region of the Democratic Republic of Congo. It is a state-controlled corporation founded in 1966 and a successor to the Union Minière du Haut Katanga. Gecamines is engaged in the exploration, research, exploitation and production of mineral deposits including copper and cobalt.

Hunan Nonferrous Metals Holding Group Co., Ltd. is a nonferrous metals company of China. It is a subsidiary of China Minmetals, which in turn indirectly under supervision of State-owned Assets Supervision and Administration Commission.

Youser or Shaanxi Non-ferrous Metals Holding Group is the biggest molybdenum and titanium mining and metallurgy company in Shaanxi, China. Via subsidiaries, the company develops, manages, and operates non-ferrous metal resources, including lead, zinc, molybdenum, aluminum and titanium products, among others. The Group is also active in geological engineering and the processing and trading of mining products.

Shenzhen Zhongjin Lingnan Nonfemet Co., Ltd. known as Zhongjin Lingnan in China or their English name Nonfemet, is a Chinese company engaged in the mining and processing of lead, zinc and other non-ferrous metals. In 2015 financial year, the company also had 0.49% revenue from real estate development.

Ghanshyam Das Binani (1932–1998) was an Indian Marwari industrialist, playing an active role in his father's ancestral business of trading in non-ferrous metals. He had been the President of Indian Non-Ferrous Metal Manufacturers Association and had also been on the committees of Indian Merchants Chambers and Federation of Indian Chamber of Commerce and Industry. He, along with his father, set up joint ventures with Revere Copper and Brass for Copper and Copper Alloy Extrusions and with Consolidated Mining & Smelting Company Ltd., Canada for manufacture of Electrolytic Zinc. With this came the birth of Cominco Binani Zinc Ltd., on 2 August 1962, promoted by Binani Metals Limited in Binanipuram on the banks of Periyar River in Kerala. Cominco Binani Zinc Ltd. became the first producer of primary zinc metal in the country and the first slab was cast on 21 April 1967. In line with their overall world wide policy, Cominco Ltd. also withdrew as financial collaborators of the company on 3 May 1991, and the company was rechristened Binani Zinc Ltd.

Hunan Valin Steel Co., Ltd. is a Chinese state-owned company based in Changsha. Founded in 1997, it is based in Hunan, and is primarily engaged in the smelting, manufacture and sale of iron and steel products, as well as nonferrous metal products. As of 8 November 2016, the company was a constituent of SZSE 1000 Index but not in SZSE Component Index. With a market capitalization of $2.3 billion in May 2015, the company was ranked #1,858 on Forbes Global 2000 list. 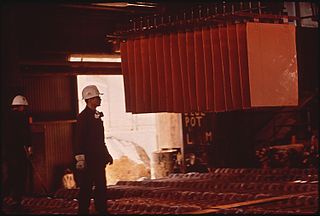 Non-ferrous extractive metallurgy is one of the two branches of extractive metallurgy which pertains to the processes of reducing valuable, non-iron metals from ores or raw material. Metals like zinc, copper, lead, aluminium as well as rare and noble metals are of particular interest in this field, while the more common metal, iron, is considered a major impurity. Like ferrous extraction, non-ferrous extraction primarily focuses on the economic optimization of extraction processes in separating qualitatively and quantitatively marketable metals from its impurities (gangue).

This is a list of state-owned enterprises of China. A state-owned enterprise is a legal entity that undertakes commercial activities on behalf of an owner government. Their legal status varies from being a part of government to stock companies with a state as a regular or dominant stockholder. There is no standard definition of a government-owned corporation (GOC) or state-owned enterprise (SOE), although the two terms are often used interchangeably. The defining characteristics are that they have a distinct legal shape and they are established to operate in commercial affairs. While they may also have public policy objectives, SOEs should be differentiated from other forms of government agencies or state entities that are established to pursue purely non-financial objectives. The role of the Communist Party of China in SOEs has varied at different periods but has increased during the rule of Party general secretary Xi Jinping, with the Party formally taking a commanding role in all SOEs as of 2020.

Guangxi Non-ferrous Metals Group Co., Ltd. was a state-owned enterprise of China, based in Nanning, Guangxi Zhuang Autonomous Region. It was managed by the State-owned Assets Supervision and Administration Commission (SASAC) of the Government of Guangxi.

China Cinda Asset Management Co., Ltd. known as China Cinda or just Cinda is a Chinese merchant bank and asset management company. The corporation was founded as a state-owned enterprise and a bad bank for China Construction Bank in 1999. The bank received shares by debt-to-equity swap on non-performing loans. In 2010, the corporation became a "company limited by shares".

China Orient Asset Management Co., Ltd. is a Chinese state-owned enterprise. The company is an asset management company and a merchant bank originated as a bad bank for the Bank of China. The bank received shares from debt-to-equity swap of non-performing loans.

Baiyin Nonferrous Group Co., Ltd. known also as BNMC is a Chinese company based in Baiyin, Gansu Province, China. The company was the main copper supplier in China.

The Ministry of Non-Ferrous Metallurgy was a government ministry in the Soviet Union.