Tony Guglielmo (born October 13, 1940) is a Republican member of the Connecticut Senate, representing the 35th District since 1993. [1] He represents northeastern Connecticut, including the towns of Ashford, Chaplin, Coventry, Eastford, Ellington (part), Hampton, Pomfret, Stafford, Tolland, Union, Vernon, Willington, and Woodstock. He previously served on the Small Business Administration Advisory Council and the Council on Aging. [2]

Ashford is a town in Windham County, Connecticut, United States. It is part of the Connecticut Quiet Corner. The population was 4,317 at the 2010 census. It was founded in 1714. Eastford was a part of Ashford until 1847, when the former split off to organize its own town. For this reason North Ashford is located in northeast Eastford.

Guglielmo holds a B.A. in political science from the University of Connecticut and a M.A. in history from Trinity College in Hartford. He is president and co-owner of the Penny-Hanley & Howley Co. Inc. independent insurance agency in Stafford, and he has served as a past board member of the Connecticut Association for the Prevention of Child Abuse, Connecticut Student Loan Association, Tolland Bank, and the Johnson Memorial Hospital. [2] 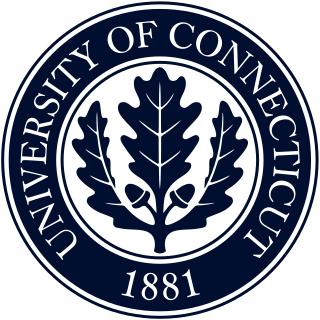 The University of Connecticut (UConn) is a public land grant, National Sea Grant and National Space Grant research university in Storrs, Connecticut, United States. It was founded in 1881.

Guglielmo also served in the US Army and National Guard from 1963 to 1968.

Stafford is a town in Tolland County, Connecticut, United States, settled in 1719. The population was 12,192 at the 2010 census. The community consists of the downtown area of Stafford Springs and the more rural villages of Crystal Lake, Ellithorpe, Hydeville, Orcuttsville, Staffordville, Stafford Hollow, Village Hill, and West Stafford. The town most likely derives its name from Staffordshire, in England.

Tolland is a town in Tolland County, Connecticut, United States. The population was 15,052 at the 2010 census.

Calvin Willey was an American politician from Connecticut who served in the United States Senate.

Morgan Gardner Bulkeley was an American politician, businessman, and sports executive. A Republican, he served in the American Civil War, and became a Hartford bank president before becoming the third president of the Aetna Life Insurance Company, a post he held for 43 years. He was elected to the National Baseball Hall of Fame in recognition of his role as the first president of the National League. Bulkeley served on the Hartford City Council and was a four-term mayor of Hartford. He later served as the 54th Governor of Connecticut for two terms and as a United States Senator.

Connecticut's 2nd Congressional District is a congressional district in the U.S. state of Connecticut. Located in the eastern part of the state, the district includes all of New London County, Tolland County, and Windham County, along with parts of Hartford, Middlesex, and New Haven counties.

This article shows U.S. Census totals for Tolland County, Connecticut, broken down by municipality, from 1900 to 2000.

Penny Bacchiochi is an American Republican politician, who served as a state representative in Connecticut. She was first elected to the House in 2002 and was reelected in 2004 and 2006. She unsuccessfully sought the office of Lieutenant Governor in the 2014 election.

John Samuel Peters was an American politician, a Whig and the 26th Governor of Connecticut.

Stafford Hollow, also known as Stafford, Stafford Village, or Furnace Hollow, is a village in the town of Stafford, in Tolland County, Connecticut, located at the junction of Route 19 and Route 319. Stafford Hollow was the town center of Stafford during the 18th and 19th centuries, before the growth of the village of Stafford Springs.

Ephraim H. Hyde was an American politician who was the 33rd Lieutenant Governor of Connecticut from 1867 to 1869. He previously served as President pro tempore of the Connecticut Senate.

Devin Thomas Gaines was a college student at the University of Connecticut who attracted media attention by earning five Bachelor's degrees simultaneously on May 6, 2007.

Dwight Marcy was an American politician.

The East Brook Mall is a mall located in Mansfield, Connecticut that was built to serve Willimantic and the surrounding area. The mall currently has 27 stores and 2 anchor stores, Kohl's and T.J. Maxx.

The Holt Memorial Fountain is a fountain located in Stafford Springs, Connecticut. The fountain was built in 1894 in memorial of Charles Holt, the owner of the Phoenix Woolen Co, a local mill. The fountain causes a roundabout to form with Route 32 and Route 190 intersecting. The fountain water system had been broken due to a truck crash some time before 1996. The fountain was proposed to be moved in 1990 to help traffic, but it was greatly opposed by the town. The former railroad station is located less than 100 feet away.