Luke married at age 18 after high school. He went to work with his father, Tony Lucidonio Sr in food trucks and other odd jobs to support his growing family. [2] In the early 1990s Luke, his brother, Nicky, and their father bought a property near the expressway in South Philadelphia. To compete with other local businesses, the original Tony Luke's stand offered a more diversified menu, offering hoagies and other fare, along with cheesesteaks. Luke Jr. soon took over the store's marketing. [2]

Eventually, the business grew to include several locations in the Philadelphia area and a line of frozen sandwiches. Through a partnership with Rastelli Foods Group, the business now has several franchised locations in Bahrain. [2]

Luke's restaurant franchise, Tony Luke's, has expanded from its original South Philadelphia location to Citizens Bank Park, Atlantic City, The Wildwoods, and the Kingdom of Bahrain. Luke's frozen line "Tony Luke's Pronto" is available nationally. [3] [4] Luke and his restaurants have earned numerous awards and recognition from both local and national publications, [5] as well being featured in episodes of Throwdown! with Bobby Flay , Dinner: Impossible , Man v. Food and Food Wars . [6]

Luke opened a location in Bahrain in 2010 and plans on opening 60 more in the Middle East and North Africa. [7]

He was the host of "Tony Luke's Eaglemania" which aired Saturday nights on Philadelphia's ABC affiliate WPVI-TV [8] [9] for a portion of the Eagles' 2010 season.

Luke was born in South Philadelphia. He attended Philadelphia High School for the Creative and Performing Arts. [10]

Using methamphetamine and other drugs as a teenager, he now uses that experience and the fighting and hustling of his youth to tell kids that difficulties can be overcome. [2] 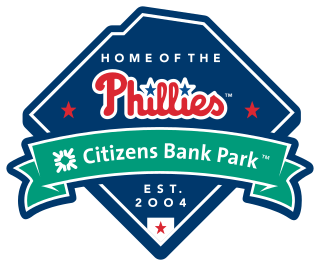 Citizens Bank Park is a baseball park located in Philadelphia, Pennsylvania, within the city's South Philadelphia Sports Complex. It is the home of the Philadelphia Phillies, the city's Major League Baseball (MLB) franchise. It opened April 3, 2004, and hosted its first regular-season baseball game on April 12 of the same year, with the Phillies losing to the Cincinnati Reds, 4–1. 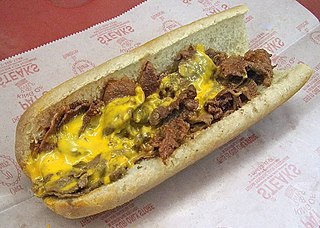 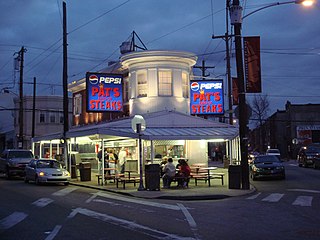 Pat's King of Steaks is a Philadelphia restaurant specializing in cheesesteaks, and located at the intersection of South 9th Street, Wharton Street and East Passyunk Avenue in South Philadelphia, directly across the street from rival Geno's Steaks. It was founded in 1930 by brothers, Pat and Harry Olivieri, who are credited with the creation of the cheesesteak. 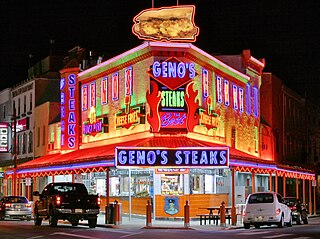 Geno's Steaks is a Philadelphia restaurant specializing in cheesesteaks, founded in 1966 by Joey Vento. Geno's is located in South Philadelphia at the intersection of 9th Street and Passyunk Avenue, directly across the street from rival Pat's King of Steaks, which is generally credited with having invented the cheesesteak in 1933. The cheesesteak has since become a signature dish for the city of Philadelphia. After Joey Vento's death in 2011, restaurant ownership was passed to his son Geno Vento.

Charleys Philly Steaks is an American restaurant chain of Philly cheesesteak stores headquartered in Columbus, Ohio. Formerly known as Charley's Steakery and Charley's Grilled Subs, the franchise was established in 1986 on the campus of The Ohio State University in Columbus, Ohio, and is still headquartered there. By 2017 there were 600 locations in 45 states and in 19 countries. 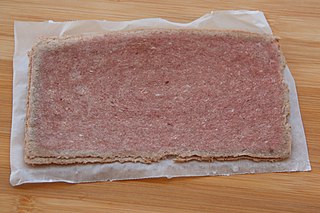 Steak-umm is an American brand of thin-sliced frozen steaks manufactured by The Steak-Umm Company, LLC. Steak-umms are sold in supermarkets throughout the United States and are used for making homemade Philadelphia-style cheesesteaks. The company claims to be "the best-known sandwich steak brand in America" and to have "helped turn the regional 'Philly Cheese Steak' Sandwich into standard fare on America's dinner tables over four decades ago". The company also produces ready-to-cook hamburger patties that are available in "Original" and "Sweet Onion" varieties.

Joey Anthony Vento was an American cook and restaurateur, who founded the cheesesteak restaurant Geno's Steaks in 1966, starting a longtime rivalry with neighboring restaurant, Pat's King of Steaks.

The Nail: The Story of Joey Nardone is a 2009 drama film. The film was directed by James Quattrochi and stars Tony Luke Jr., Tony Danza, and William Forsythe.

Tony Luke's is an American-based cheesesteak restaurant that was founded in 1992 by Tony Lucidonio, Sr. and his sons, Tony Luke Jr. and Nicky Lucidonio at its original location at 39 East Oregon Avenue in South Philadelphia. The franchise has since expanded, with 16 locations in Pennsylvania and New Jersey, one location each in Washington, DC, Maryland & Texas as well as one in Bahrain. 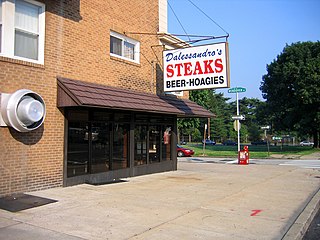 Dalessandro's Steaks & Hoagies is a cheesesteak restaurant that was founded in 1960 in Roxborough, a neighborhood in Philadelphia, Pennsylvania. When referring to Dalessandro's, The New York Times declared that "Philly food could be summed up by those cheese steaks".

Steve's Prince of Steaks is a cheesesteak eatery that was founded in 1980 on Bustleton Ave in the Oxford Circle section of Northeast Philadelphia. The eatery has since expanded to three additional locations and is popular among locals. The eatery is known for its melted American cheese and does not chop the meat.

Joe's Steaks + Soda Shop, formerly named Chink's Steaks, is a cheesesteak restaurant founded in 1949 in Northeast Philadelphia, Pennsylvania. Controversy over the restaurant's former name led to the owner renaming it. A second restaurant location opened in the Fishtown neighborhood of Philadelphia in 2015. In addition to its cheesesteak sandwich specialty, the company sells other types of sandwiches, hamburgers, hot dogs, sausages, and other foods.

A Philly taco, also known as South Street Sushi, or the Lorenzo's-Jim's Challenge, is a sandwich consisting of a cheesesteak wrapped in a jumbo slice. 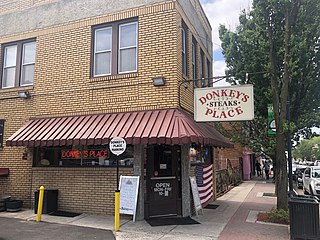 Donkey's Place is a restaurant founded in 1943 in Parkside, Camden, New Jersey, which sells various sandwiches. The deli is known for its hoagies and cheesesteaks. 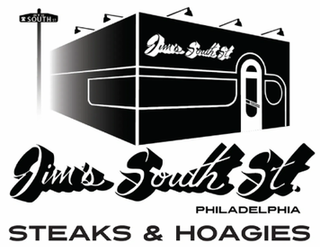 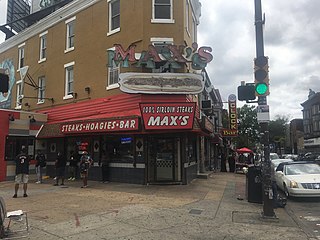