Teunis "Tony" Mulder APM (born 9 May 1955 in Rotterdam, Netherlands) [1] is an Australian politician. He was an independent member of the Tasmanian Legislative Council, representing the electoral division of Rumney from 2011 to 2017. [2]

He was born in Rotterdam in 1955, and his family emigrated to Australia in 1957. He studied political science at the University of Tasmania. [1]

Mulder is a former police officer, and was a Commander in the Tasmania Police. He was director of the State Security Unit, the Tasmanian Police counter-terrorism taskforce. [3] He has served as an alderman on the Clarence City Council since 2005. [4] Although running as an independent candidate, Mulder openly retains links to the Liberal Party, [5] for whom he ran as a candidate for Franklin in the 2010 state election. [6] Before the 2010 election, the Labor Party lodged a complaint that Mulder may have breached the Electoral Act when he appeared in a television advertisement wearing a police uniform, giving the impression that he was still a serving police officer. He was cleared of breaching the Electoral Act by the Tasmanian Electoral Commission. [7]

Mulder was defeated by Labor candidate Sarah Lovell at the 2017 election for Rumney. [8] He contested the new seat of Prosser at the 2018 periodic election. [9]

Clarence City Council is a local government body in Tasmania, and one of the five municipalities that constitutes the Greater Hobart Area. The Clarence local government area has a population of 56,945, covering the eastern shore of the Derwent River from Otago to the South Arm Peninsula and the smaller localities of Cambridge, Richmond, and Seven Mile Beach. 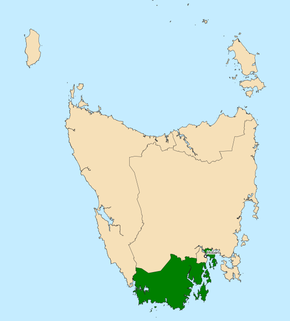 Lin Estelle Thorp is a former Australian politician. She was a Labor Party member of the Tasmanian Legislative Council from 1999 until 2011, representing the electorate of Rumney, and serving as Minister for Human Services (2008–2010) and Minister for Education and Skills, Minister for Children, and Minister for Police and Emergency Management (2010–2011) in the Bartlett and Giddings governments. She was defeated for re-election to her state seat by independent Tony Mulder at the 2011 periodic elections, but was subsequently nominated to a casual vacancy for the Australian Senate in June 2012 caused by the resignation of Nick Sherry. She was defeated from the third position on the Tasmanian Labor Senate ticket at the 2013 federal election, and her term ended on 30 June 2014.

A by-election was held in the Tasmanian Legislative Council division of Pembroke on 1 August 2009. It was triggered by the resignation of sitting member Allison Ritchie.

Brian Neal Wightman is an Australian politician. He is a first-generation Tasmanian of Northern Irish descent. His parents William and Mary migrated from Belfast, Northern Ireland, to Tasmania in 1971.

The 2014 Tasmanian state election was held on 15 March 2014 to elect all 25 members to the House of Assembly. The 16-year incumbent Labor government, led by the Premier of Tasmania Lara Giddings, sought to win a fifth consecutive term against the Liberal opposition, led by Opposition Leader Will Hodgman. Also contesting the election was the Greens led by Nick McKim. The Palmer United Party made a significant effort in the election.

Periodic elections for the Tasmanian Legislative Council were held on 7 May 2011. The three seats up for election were Launceston, held by retiring independent MLC Don Wing; Murchison, held by independent MLC Ruth Forrest; and Rumney, held by Labor MLC Lin Thorp. These seats were last contested in 2005.

Periodic elections for the Tasmanian Legislative Council were held on 2 May 2009. The three seats up for election were Derwent, held by Labor MLC Michael Aird; Mersey, held by retiring independent MLC Norma Jamieson; and Windermere, held by independent MLC Ivan Dean. These seats were last contested in 2003.

Susanne Lynnette Hickey is an Australian politician. She has been a Liberal Party member of the Tasmanian House of Assembly since the 2018 election, representing the electorate of Denison. She was previously Lord Mayor of Hobart from 2014 until 2018.

Periodic elections for the Tasmanian Legislative Council were held on 6 May 2017. The three seats up for elections were Launceston, Murchison and Rumney. They were previously contested in 2011.

Sarah Elizabeth Lovell is an Australian politician. She has been the Labor member for Rumney in the Tasmanian Legislative Council since the 2017 periodic elections.

The electoral division of Prosser is one of the fifteen electorates in the Tasmanian Legislative Council, it includes the south-east coast of Tasmania, the Sorell township and the Tasman Peninsula. Prosser is named after the Prosser River, which flows through the centre of the division.