Tony Shafrazi (born May 8, 1943), is an American art dealer, gallery owner and artist. He is the owner of the Shafrazi Art Gallery in New York City, who deals artwork by artists such as Francis Bacon, Keith Haring, and David LaChapelle.

Shafrazi was born in Abadan, Iran to Iranian Armenian parents and raised Christian. [1] [2] His parents divorced when he was two years old. [2] [3] At the age of 13, his father, an oil-company executive, and his stepmother took Shafrazi to England and left him to study there. [3] He first went to a vicarage in Bilston, then to boarding school in Whittlebury, and later Hammersmith College of Art & Building. [2] He attended the Royal College of Art from 1963 to 1967. [1] [2] While attending Royal College of Art, Shafrazi visited New York City in 1965, staying in a YMCA that was near Andy Warhol's Factory. [2] On that trip he met Roy Lichtenstein, Andy Warhol, and art dealer Leo Castelli. [2]

He moved to New York City in 1969, [4] where he lectured at several universities, including the School of Visual Arts. [3]

On February 28, 1974, Shafrazi spray-painted Picasso's 1937 painting Guernica , which hung in the Museum of Modern Art, with the words "KILL LIES ALL" in foot-high letters. [3] [5] He had meant to write, "ALL LIES KILL", as a response to James Joyce's novel, Finnegans Wake . [5] When a guard finally grabbed him, Shafrazi shouted, "Call the curator. I am an artist." [3]

The paint was easily removed as the painting was heavily varnished. It is believed that Shafrazi was protesting the announcement, the day before, of the release on bail of U.S. lieutenant William Calley. Calley, then under house arrest following his conviction, in 1971, for his part in the My Lai massacre in Vietnam, had petitioned for habeas corpus; he had initially been sentenced to life imprisonment. Although his appeal was overturned in June, he was finally released from U.S. Army custody later in the year after having received a limited pardon from Richard Nixon.

Shafrazi was a member of the Art Workers' Coalition, which in 1970 had staged a protest at MoMA by unfurling a copy of the famous My Lai protest poster And babies in front of the Guernica painting, which itself depicts the tragedies of war and the suffering it inflicts upon innocent civilians. Shafrazi was later given five years' probation, without a trial. [3]

Shafrazi dedicated his booth at Art Basel 2012 to his own artwork and caused a stir. [6] [7] After nine hours, he added other artists to his booth. [8]

In 1976, only a few years after the spray painting incident, Shafrazi returned to his homeland and became the art advisor to the Shah of Iran and Kamran Diba, then director of the Teheran Museum of Contemporary Art. [4] Shafrazi went to about 15 of the top New York dealers at the time — including Leo Castelli, Ileana Sonnabend, Paula Cooper, John Weber, and Irving Blum — and helped assemble a 20th-century art collection on the Shah's behalf within four years. [9] As he did so his power expanded in the art market. The museum Shafrazi had constructed in Tehran to house this collection epitomized the Shah's modern Iranian state, thus the collection was predominantly Western: from Impressionism to Abstract Expressionism, Pop and Conceptual Art, including works by Andy Warhol, Roy Lichtenstein, and Willem de Kooning.

In 1978, Shafrazi briefly opened his own commercial gallery in a small Tehran shopfront but closed it because of conditions in the country leading up to the 1979 Revolution. [10] He lost much of his art during that time but safely returned to New York City. [10]

Shafrazi converted his rented apartment into a makeshift gallery where he slept on a small loft bed at night. [3] In 1979, he opened his first New York City gallery, and within a few years he had made his reputation handling talents like Donald Baechler and then-hot graffiti artists like Jean-Michel Basquiat, Keith Haring, and Kenny Scharf and also European artists like Brian Clarke, Enzo Cucchi, Hervé Di Rosa, and Jean-Charles Blais. [4] In 1990, he opened a new 13,000-square-foot gallery at 119 Wooster Street, with an exhibition entitled "American Masters of the 60's" and including Carl Andre, Tom Wesselmann, Jasper Johns, Donald Judd, Frank Stella, and Andy Warhol. [11]

In 1999, the Francis Bacon estate chose Shafrazi as its United States representative. [12] In 2004, the gallery opened another space on 26th Street with a large show of paintings by Picasso, Francis Bacon and Jean-Michel Basquiat. [13]

In 1995, Stephanie Seymour and Peter Brant had Shafrazi serve as the best man at their wedding at an estate outside Paris. [16]

Tony Shafrazi is also actively involved in supporting Children of Armenia Fund, a charitable organization, that aims to advance rural communities in Armenia. He is the Honorary Chair of COAF Honorary Board. [17]

In 2020, Shafrazi has publicly supported Donald Trump for president. [15] 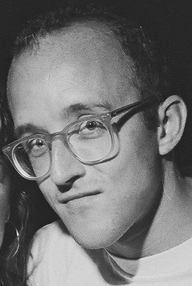 Keith Allen Haring was an American artist whose pop art and graffiti-like work grew out of the New York City street culture of the 1980s. Much of his work includes sexual allusions that turned into social activism. He achieved this by using sexual images to advocate for safe sex and AIDS awareness.

Guernica is a large 1937 oil painting on canvas by Spanish artist Pablo Picasso. It is one of his best known works, regarded by many art critics as the most moving and powerful anti-war painting in history. It is exhibited in the Museo Reina Sofía in Madrid.

Gagosian is a contemporary art gallery owned and directed by Larry Gagosian. The gallery exhibits some of the most influential artists of the 20th and 21st centuries. There are 16 gallery spaces: five in New York; three in London; two in Paris; one each in Basel, Beverly Hills, San Francisco, Rome, Athens, Geneva and Hong Kong.

Peter Mark Brant, Sr. is an American industrialist, as well as a magazine publisher, film producer, and art collector. He is married to model Stephanie Seymour.

Michael Bidlo is an American conceptual artist who uses painting, sculpture, drawing, performance, and other forms of "social sculpture." He was born in Chicago, Illinois and studied at the University of Illinois (BA,1973), Southern Illinois University Carbondale (MFA,1975), and at Teachers College at Columbia University in New York, (MA,1978).

Jose Mugrabi is a Syrian Israeli businessman and art collector. He is the leading collector of Andy Warhol, with 800 artworks.

The Charnel House is a 1944–1945 oil and charcoal on canvas painting by Spanish artist Pablo Picasso, which is purported to deal with the Nazi genocide of the Holocaust. The black and white 'grisaille' composition centres on a massed pile of corpses and was based primarily upon film and photographs of a slaughtered family during the Spanish Civil War. It is considered to be Picasso's second major anti-war painting, the first being the monumental Guernica (1937), although it is smaller than its predecessor and unfinished. The painting is housed in the Museum of Modern Art in New York City.

Suicide is a 1963 silkscreen painting by American pop artist, Andy Warhol. It is currently in the collection of the Tehran Museum of Contemporary Art in Tehran.

For people with the surname, see Skarstedt (surname). 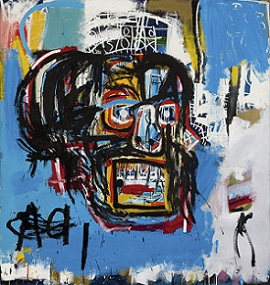 Untitled is a painting created by American artist Jean-Michel Basquiat (1960–1988) in 1982. The artwork, which depicts a skull, is among the most expensive paintings ever purchased. In May 2017, it sold for $110.5 million at Sotheby's, the highest price ever paid at auction for work by an American artist. 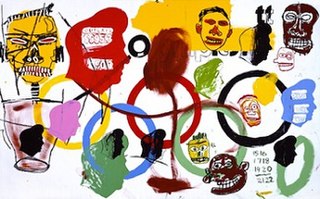 Olympics is a painting created by American artists Jean-Michel Basquiat (1960–1988) and Andy Warhol (1928–1987) in 1984. The artwork was a commemoration of the 1984 Summer Olympics. It sold for $10.5 million at Phillips's Contemporary Art Evening Sale in June 2012, which at the time was a record high for a Warhol-Basquiat collaboration. It is the second most expensive Warhol-Basquiat collaboration sold at auction after Zenith (1985). 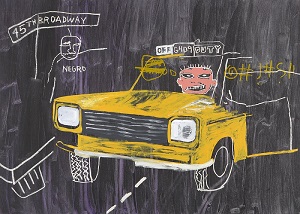