Stigsson was born in Lönsboda, Sweden and grew up in a working class home. [5] Stigsson began his wrestling career in Lönsboda, and later competed for BK Ore in Vinslöv. [6] In 1975 he did his military service at the North Scanian Regiment (P 6) in Kristianstad. [5] When living in Kristianstad, he was for a period the chairman of Willands Rider Association. [6] Stigsson would later serve in the Skaraborg Regiment. [7] From 1992 to 1993, Stigsson served as acting commander of the Swedish Battalion in Lebanon, part of the United Nations Interim Force in Lebanon (UNIFIL). [5] In 1995 he was appointed commanding officer of the Skaraborg Brigade (PB 9) (later renamed Skaraborg Regiment and Skaraborg Brigade (MekB 9). [5] Stigsson left the position in 1999 and was appointed head of the Training Department in the General Training and Management Directorate (Grundorganisationsledningen) at the Swedish Armed Forces Headquarters in Stockholm. A year later he was appointed head of the Joint Operations Command (Operationsledningen, OPL).

He became a member of the Royal Swedish Academy of War Sciences in 2001. [8] Stigsson served as the Viking 03 Excersise Director in 2003. [9] Stigsson served as acting head of the Joint Forces Command (OPIL) at the Swedish Armed Forces Headquarters until 1 September 2004 when he took in charge of the command. [10] Stigsson has also served as Sweden's representative in the Challenges of Peace Operations, an international association for the exchange of experience in peace operations. [5]

According to the TV4 Kalla Fakta documentary, Major General Stigsson took serious security risks long before he was arrested for assaulting his wife. When searched by police, he was found to be in possession of very explicit pornographic material, which, it is alleged, made him vulnerable to blackmail. The TV4 investigation contends that a combination of the senior officer's sexual behaviour and his handling of extremely sensitive military documents constituted a major national security risk. When Stigsson was arrested in March 2005, police found explicit, and very deviant, pornographic material in the Major General's uniform pockets as well as in his places of residence. The risk of blackmail was further increased by the fact that Stigsson made contact with unknown persons on the Internet, with the intention of meeting them for group sex at swingers' clubs. According to TV4, whose reporters have had access to the full police investigation, the major general was aware of the risks. In an e-mail sent to a woman from his work address, he writes that he wanted to "test the limits", knowing that he was "always running the risk of finding myself in a blackmail situation".

In June 2006, chief prosecutor Ulf Forsberg in Uppsala decided not to press charges with Stigsson over negligence with regard to secret documents, a crime that is considered a threat to national security. Police found 300 documents in Stigsson's home, out of which 70 were classified, but Forsberg was not able to prove that any of the information contained in the documents had been disclosed to a third party. Among the copied documents found scattered around various locations in Stigsson's house were some of the most secret and sensitive in the military's possession. These included, for instance, notes and plans of secret mountain hideouts from which Sweden would be governed in wartime, as well as documents concerning the outcome of successful intelligence operations. [11] Supreme Commander Håkan Syrén has requested Stigsson's dismissal. In May 2008, the National Disciplinary Offence Board reached the same decision; Stigsson has appealed it. Since 2005 he has had no active involvement with the military. Syrén, previously head of the Swedish Military Intelligence and Security Service, also pointed out that the Swedish Armed Forces have recently introduced more rigorous background checks for those seeking high-level military posts.

In May 2008, Stigsson was sentenced to three months in prison and was fired from the Swedish Armed Forces. [4]

Stigsson became chairman of the Swedish Wrestling Federation in 2001. [12]

The Swedish Security Service is a Swedish government agency organised under the Ministry of Justice. It operates like a security agency responsible for counter-espionage, counter-terrorism, as well as the protection of dignitaries and the constitution. The Swedish Security Service is also tasked with investigating crimes against national security and terrorist crimes. Its main mission, however, is to prevent crimes, and not to investigate them. Crime prevention is to a large extent based on information acquired via contacts with the regular police force, other authorities and organisations, foreign intelligence and security services, and with the use of various intelligence gathering activities, including interrogations, telephone tapping, covert listening devices, and hidden surveillance cameras.

Ahmed Agiza and Muhammad Alzery were two Egyptian asylum-seekers who were deported to Egypt from Sweden on December 18, 2001, apparently following a request from the United States Central Intelligence Agency. The forced repatriation was criticized because of the danger of torture and ill treatment, and because the deportation decision was executed the same day without notifying the lawyers of the asylum seekers. The deportation was carried out by American and Egyptian personnel on Swedish ground, with Swedish servicemen apparently as passive onlookers.

Military Intelligence and Security Service is a division of the Swedish Armed Forces Central Command.

Southern Military District, originally I Military District was a Swedish military district, a command of the Swedish Armed Forces that had operational control over Southern Sweden, for most time of its existence corresponding to the area covered by the counties of Malmöhus, Kristianstad, Blekinge, Kronoberg, Jönköping and Kalmar. The headquarters of Milo S were located in Kristianstad.

Major General Karl Lorentz Engelbrekt Engelbrektson is a senior Swedish Army officer and a former Force Commander of the Nordic Battlegroup (NBG). He served as Assistant Chief of Armed Forces Training & Procurement from 2014 to 2016. Engelbrektson is currently serving as the Chief of Army since 2016.

Sven Bergman is a Swedish investigative reporter/producer for the current affairs show "Uppdrag granskning" on SVT.

Sverker John Olof Göranson is a Swedish Army general with an armoured forces background. In 1995, he was the chief of staff of the Nordic battalion within UNPROFOR in Bosnia and Herzegovina during the Yugoslav Wars. Göranson was Inspector of the Swedish Army from 2005 to 2007, and served as Chief of Defence Staff from 2007 to 2009. He was the Supreme Commander of the Swedish Armed Forces from 25 March 2009, when he succeeded Håkan Syrén, until 1 October 2015, when he was succeeded by Micael Bydén.

Major General Gunnar Åke Karlson is a retired Swedish Army officer. Karlson's senior appointments include regimental commander of Gotland Regiment, Chief of Training and Procurement and Director of Military Intelligence and Security. He retired from active service in April 2019.

Major General Jan Robert Andreas Andersson is a retired Swedish Air Force officer. He served as Inspector General of the Air Force from 2003 to 2008. 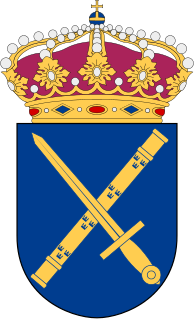 Lieutenant General Claes-Göran Lennart Fant is a Swedish Army officer. His senior commands include commanding officer of the Strategic Plans and Policy Directorate and head of the Swedish Armed Forces Headquarters.

Major General Bert Göran Stenfeldt was a Swedish Air Force officer. Stenfeldt served as Chief of the Air Staff from 1987 to 1990 and as the commander of the First Air Group from 1990 to 1994.