Too Many Cooks (short)

Too Many Cooks is a surreal dark comedy short that originally aired as a special during Adult Swim's "infomercials" block on October 28, 2014, at 4:00 am Eastern Time. [2] [3] It was created, written, and directed by Casper Kelly, and produced by Williams Street. After its original airing, the piece became a viral video online and was repeated each night at midnight Eastern Time during the week of November 11, 2014.

The video begins as a parody of opening credits sequences of 1970s, 1980s and 1990s American situation comedies, then television crime dramas, prime time soap operas, Saturday-morning cartoons, superhero live-action series, slasher films and science fiction television shows, with each of them gradually bleeding into the next. Particular focus is put on a slasher film villain (played by William Tokarsky), who is hidden in the background of several early shots but eventually starts killing the other characters with a machete. The opening credits sequence ends after about ten minutes and transitions into the "episode", with all the characters from the opening standing in the one house; the short ends roughly ten seconds later, cutting to closing credits before a full line of dialogue ("Honey, I'm ho-") can be spoken. [4]

According to Kelly, he conveyed the concept of the short to his Squidbillies writer-producer friend Jim Fortier, who in turn described it to Adult Swim executive Mike Lazzo, who loved the idea. The footage was filmed over a period of three days in October 2013 with a cast completely composed of extras from the Atlanta area. [5] Post-production took a year, with Kelly recruiting friends and co-workers to help with the process. [6]

While the video depicts the opening credits of a fictional television show, most of the cast members' real names were used. [5] [7] [8] [9] [10] [11] According to Katie Adkins, actors were not presented with a clearly explained script, but rather coached on the go, in a somewhat nonchalant manner. [12]

Upon its release by a third party on YouTube, Too Many Cooks became a viral video, [15] with Rolling Stone calling it an "instant cult classic". [5] Director Rian Johnson said that, "no joke", Too Many Cooks should have been nominated for an Academy Award for Best Live Action Short Film. [16] [17] Comedians including Penn Jillette, Simon Pegg, Zach Braff, and Richard Kelly tweeted their positive reactions to Too Many Cooks. [18]

David Sims of The Atlantic wrote that Too Many Cooks relied on "the classic anti-comedy premise of taking so long with something that it goes from being funny, to being not very funny, to being boring, to suddenly becoming hilarious again. More than that, it's an excellent piece of non-narrative sketch comedy that sets out boundaries for its own weird reality and then goes about breaking them over and over again." [19] Dr. Julian Darius called it "a sublime postmodern masterpiece" and analyzed its metafictional aspects. [20]

CNN created a parody of the video in March 2015, using it to mock the number of potential candidates in the 2016 United States Presidential Election. [21] The video was conceived by digital producer Eric Weisbrod; Chris Moody, a senior digital correspondent at CNN and the video’s creative director, noted that "b-roll from cheesy political ads...are almost taken right out of '90s sitcoms. If you look at old ads, it’s families smiling at each other and smiling at the camera. It just fit so nicely." [22] Williams Street Productions, LLC, d/b/a Williams Street and formerly known as Ghost Planet Industries, is an American animation and live action television production studio owned by the Global Kids, Young Adults and Classics division of Warner Bros. Entertainment, a unit of AT&T’s WarnerMedia. The studio is the in-house production arm of Adult Swim. Mike Lazzo and Keith Crofford oversaw operations for the building for most of its existence. In 2019, Lazzo retired from the company, and Crofford exited the following year. Michael Ouweleen succeeded Lazzo as president in 2020 while Crofford's successor has yet to be named.

Kaley Christine Cuoco is an American actress and producer. After a series of supporting film and television roles in the late 1990s, she landed her breakthrough role as Bridget Hennessy on the ABC sitcom 8 Simple Rules (2002–2005). Thereafter, Cuoco voiced Brandy Harrington on Brandy & Mr. Whiskers (2004–2006) and appeared as Billie Jenkins on the final season of the television series Charmed (2005–2006). She later starred as Penny on the CBS sitcom The Big Bang Theory (2007–2019), and received a Satellite Award, a Critics' Choice Award, and two People's Choice Awards for the role. Since 2020, Cuoco has starred in and served as executive producer for the HBO Max comedic thriller The Flight Attendant, which received widespread critical acclaim. For this performance, she has received nominations at the Golden Globe Awards, the Screen Actors Guild Awards, and the Critics' Choice Awards. 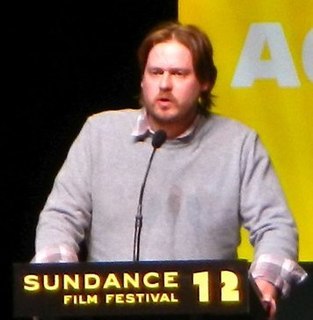 Patsy Kelly was an American actress. She is known for her role as the brash, wisecracking sidekick to Thelma Todd in a series of short comedy films produced by Hal Roach in the 1930s. Known as the Queen of Wisecracks, Kelly's career continued after Todd's death in 1935 in similar roles. 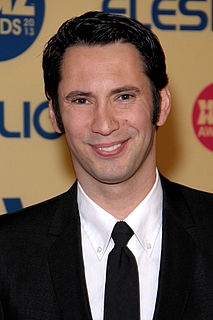 Team Unicorn is a multimedia production team formed in Los Angeles, California, in 2010. Its current members are American actresses Clare Grant, Rileah Vanderbilt, Milynn Sarley, and Alison Haislip. The group is known for producing parody song videos such as "G33k & G4m3r Girls", a spoof of Katy Perry's "California Gurls", and "All About that Base", a Star Wars parody of Meghan Trainor's song "All About That Bass". The group had a pilot on Adult Swim called The Team Unicorn Saturday Action Fun Hour!, and have attended numerous science fiction and comic conventions. 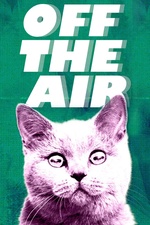 Off the Air is an American anthology television series created by Dave Hughes for Adult Swim. The series is presented without explanation or narration as a showcase of surreal footage arranged around a single loose theme and blended without pause into a single continuous presentation. The series premiered Adult Swim on January 1, 2011, 4:00 am New Year's Day. 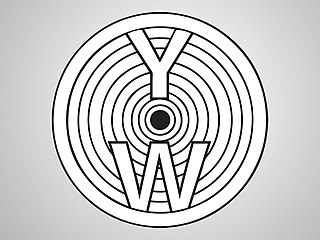 You're Whole is an American satirical television series created by Michael Ian Black for Adult Swim. The show parodies self-help infomercials and stars Black as the host, Randall Tyree Mandersohn. In it, Mandersohn advertises his systems of objects and actions designed to help people with their issues. It was the production of Abominable Pictures, with which Black originally consulted with the premise of the show in mind. Meanwhile, Michael Showalter, longtime collaborator of Black, served as the director. 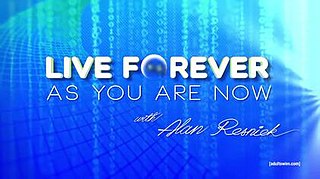 Live Forever as You Are Now with Alan Resnick is a television special written, created and directed by Alan Resnick and Ben O'Brien for Adult Swim, as part of the Infomercials series. The special is presented as a parody of self-help infomercials, advertising a four-step program for creating a digital avatar that acts as a backup of its host. The special is hosted by Alan Resnick as himself, and is presented by Dan Deacon. Both, along with O'Brien, are members of the Baltimore-based art collective Wham City, who co-produced the episode under their video production division, AB Video Solutions.

Alan Resnick is an American comedian, visual artist, and filmmaker based in Baltimore, Maryland. He is a member of the Wham City arts collective and founding member of Wham City Comedy.

Infomercials is an umbrella title for independent, quarter-hour television comedy specials airing on Adult Swim. Unlike actual paid programming, all of the programs are fictitious, and for the most part maintain no continuity with each other.

William Tokarsky is an American character actor known for his recurring role as William the Demon on the Adult Swim series Your Pretty Face Is Going to Hell, and as the Killer in the cult film Too Many Cooks. 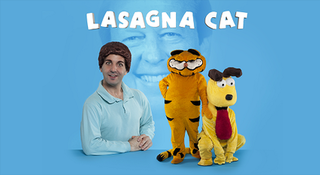 Lasagna Cat is a web series created by Fatal Farm as a parody of the Garfield comic strips. The series was uploaded to YouTube and ran from January 14, 2008 to February 23, 2017. The series consists mainly of humorous live-action recreations of Garfield comics, as well as absurdist and dark humor.