Too Young to Marry

Too Young to Marry is a 2007 romantic comedy drama film made for television. It involves two 17-year-olds, Max Doyle (Dillon Casey) and Jessica Carpenter (Nina Dobrev) who think that they are in love and decide to get married, despite their parents' disapproval. Shortly afterward, the two begin to realize they have very different views on the future.

The film was directed by Michel Poulette and based on a story by Elle Triedman. Polly Draper, Allison Graham, Anna Hopkins, James O'Regan and Amanda Tilson also acted in the film. Too Young To Marry was first aired in the US on July 9, 2007, on Lifetime.

In Connecticut, Max and Jessica are a high school couple and very much in love after meeting as freshmen. Max has an interest in construction, while Jessica's ambition is to be an orthopedic surgeon. Jessica lives with her mother and younger sister. She must contend with the aftermath of her parents' acrimonious divorce. She still believes in the meaning of true love when she allows Max to sneak into her bedroom so that the couple can spend more time together. Their plan is to attend Harvard University.

When Jessica's father, Roger, reveals that his girlfriend, Kelly, is pregnant and they are going to get married, Jessica and her sister are shocked and disgusted. Jessica's father expects his older daughter to tell his ex-wife of the impending marriage. When Jessica sees her mother arrive home after a bad date with a philatelist, she does not reveal to her what her father has told her.

Jessica discovers that Harvard has accepted her. She and Max are ecstatic. The couple are then less than enthusiastic when Jessica and Max learn that Harvard has deferred Max's acceptance. Matters improve for the couple when Max proposes to Jessica on Valentine's Day. He feels that he has never been more sure of anything and that they are ready to spend the rest of their lives together. He loves his fiancé because of her optimistic attitude, the fact that she is headstrong and her ability to make things work. Jessica immediately accepts and feels that in spite of the proposal, she will still attend Harvard.

Jessica and Max announce their engagement plans to both sets of parents. As a consequence of Jessica's young age (i.e. seventeen), she requires consent from her parents. Roger feels as if his daughter will be compromising her university education and does not wish to play a part in Jessica and Max's marriage. Max's father supports his son's decision because he feels that Jessica is a terrific person and that he and his wife also married at a young age. Jessica's mother makes her daughter promise that she will finish college and earn her degree, as well as use birth control.

On Jessica's wedding day, Roger begs his daughter not to go through with the marriage. Max and Jessica get married and live at Jessica's home, as her mother gives them permission. Tensions arise when Max moves his trophies into the room and Jessica becomes slightly uncomfortable. In spite of this, Max and Jessica seem happy to spend the rest of their lives together. Unfortunately, Harvard rejects Max. Jessica shows her ability to rectify situations when the couple rents off-campus accommodation because they want to be together.

Jessica meets Sophie and Carter, two freshmen. They are curious and surprised about Jessica's marriage. Jessica and Carter share a romantic kiss after she hears him play his guitar at a local bar, but Jessica tells him that it must never happen again. Tensions arise between Jessica and Max when Max forgets to pay the electricity bill, although he does make an effort to make good his wrong by preparing a candlelight supper. Jessica also becomes even more annoyed with her husband when he reveals that he does not want to attend college.

When Max sees Carter and Jessica having a drink together, Jessica stays at Sophie's for a trial separation from Max. Later, when Max tries to apologize to Jessica, she realizes that he has been kissing another young woman. Carter and Jessica spend more time together. This culminates in the two kissing passionately, which Jessica stops. Outside Carter's place, they run into Max and another young woman. Max and Jessica both move back to their respective homes temporarily. Max's parents encourage him to get an annulment or divorce. Jessica's mother advises her that a test of a strong marriage is the ability to get through challenging times.

When the couple has dinner together, Max reveals that he has started to fill in college applications and that he has been offered an internship at an architect's office. The film ends with Max and Jessica making a concerted effort to rebuild their marriage.

Lorelai Victoria Gilmore is a fictional character in The WB dramedy television series Gilmore Girls. Portrayed by actress Lauren Graham, she appeared in every episode of the show from the pilot in 2000 to the series finale in 2007.

Darren Miller is a fictional character from the BBC soap opera EastEnders, played by Charlie G. Hawkins. He made his first appearance on 6 September 2004 and departed in the episode broadcast on 20 September 2011. 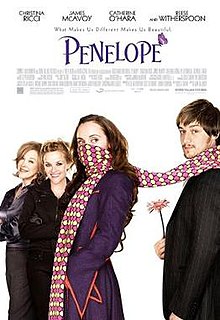 Penelope is a 2006 British-American fantasy romantic comedy film directed by Mark Palansky and starring Christina Ricci, James McAvoy, Catherine O'Hara, Peter Dinklage, Richard E. Grant, and Reese Witherspoon. The film details about a girl who is born with the nose of a pig due to a curse that was placed on her family by a vengeful witch. 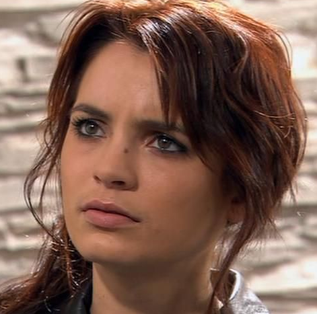 Belle Taylor is a fictional character from the Australian soap opera Home and Away, played by Jessica Tovey. She made her first appearance during the episode broadcast on 3 February 2006. Belle's storylines included finding her birth mother, a drug addiction, her relationship with Aden Jefferies and being diagnosed with cancer. In 2009, it was announced that Tovey had quit the show and the writers took the decision to kill off the character. Belle made her last appearance on 11 August 2009.

Wind at My Back is a television series which aired in Canada on CBC Television between 1996 and 2001. It was created and produced by Kevin Sullivan, best known for his adaptation of Anne of Green Gables and Road to Avonlea. The series had five seasons, each with 13 episodes, and a Christmas-themed movie produced to wrap up loose ends, following the unexpected cancellation of the series.

Bazaar is a 1982 Indian drama film directed by Sagar Sarhadi and starring Naseeruddin Shah, Farooq Shaikh, Smita Patil and Supriya Pathak. The film set in Hyderabad, India, highlights the issue of bride buying in India, through the tragedy of a young girl being sold by needy parents to affluent expatriate Indians in the Gulf.

Christian Mann is a fictional character on German soap opera Verbotene Liebe . He is portrayed by actor Thore Schölermann from 27 November 2006. Schölermann was initially supposed to take a break after December 2012. However, it was later reported that the actor will not return full-time but in a limited capacity.

Elisabeth von Lahnstein is a fictional character from the German soap opera Verbotene Liebe, portrayed by Martina Servatius. The character made her first appearance on 2 August 1999. After several guest appearances, Servatius became part of the main cast in March 2000. Elisabeth is considered to be the show's matriarch.

Leanne Holiday is a fictional character from the British Channel 4 soap opera Hollyoaks and its Internet spin-off Hollyoaks: Freshers, played by Jessica Forrest. Forrest's casting was announced in July 2010 and she began filming her scenes in June. The actress originally commuted from Manchester to Liverpool for filming, before relocating there. Forrest was a drama and film studies student when she gained the role of Leanne. She made her first appearance in Hollyoaks: Freshers on 26 August 2010 before appearing in the main show. Leanne departed the show in 2013, as part of the show's eighteenth anniversary celebrations. Linda Carter is a fictional character from the BBC soap opera EastEnders, played by Kellie Bright. She first appeared on 19 December 2013 and her casting was announced alongside her on-screen partner, Mick Carter. Linda was introduced by new executive producer Dominic Treadwell-Collins as part of the Carter family. The introduction of Dyer and Bright was part of a large cast shake-up planned by new executive producer Treadwell-Collins in an attempt to improve ratings. Bright previously auditioned for the role of Tanya Branning in 2006, but the part was given to Jo Joyner. Linda became landlady of The Queen Victoria public house and moved there with her family from her mother's pub in Watford. She has been compared to original landlady Angie Watts and Bright has said that she had based her portrayal of Linda on Angie. In May 2016, Bright announced that she was pregnant with her second child and that she would be taking maternity leave. Linda departed the series on 25 December 2016 although she made two separate guest appearances on 16 March 2017 and 30 June 2017. She returned full-time on 7 August 2017.

True Love is a Japanese slice-of-life romance shōjo manga series written and illustrated by Miwako Sugiyama. It was published by Shogakukan, with serialization on Sho-Comi magazine and with seven volumes compiling the chapters released between 2013 and 2015.

Martin Fowler is a fictional character from the BBC soap opera EastEnders. The character was played by Jon Peyton-Price from the character's introduction 1985 until 1996, and by James Alexandrou from 1996 until 2007. When Alexandrou took over the role, the character was seen more regularly and was featured in prominent storylines such as sleeping with his neighbour Sonia Jackson and getting her pregnant with their daughter Bex; accidentally killing his friend Jamie Mitchell after running him over in his car, which results in Martin being imprisoned for Jamie's death and subsequently feuding with the latter's godfather Phil ; enduring a problematic marriage with Sonia after their wedding; and coping with the deaths of both his brother Mark and their mother Pauline. Alexandrou quit the role in 2006, and Martin departed on 2 February 2007.