Top Withens ( SD981353 ) (also known as Top Withins) is a ruined farmhouse near Haworth, West Yorkshire, England, which is said to have been the inspiration for the location of the Earnshaw family house Wuthering Heights in the 1847 novel of the same name by Emily Brontë.

A plaque affixed to a wall reads:

This farmhouse has been associated with "Wuthering Heights", the Earnshaw home in Emily Brontë's novel. The buildings, even when complete, bore no resemblance to the house she described, but the situation may have been in her mind when she wrote of the moorland setting of the Heights.

— Brontë Society 1964. This plaque has been placed here in response to many inquiries.

The ruin lies on the Pennine Way east of Withins Height below Delf Hill. It is a popular walking destination from nearby Haworth and Stanbury. Such is the attraction to Japanese literary tourists that some footpath signs in the area include directions in Japanese.

On 18 May 1893, Top Withens was struck by lightning during a thunderstorm. Holes were made in the wall, the roof was partially torn off, flags were cracked, and around 30 windows were almost completely removed. A portion of slate was thrown far from the house by the wind, and in the kitchen the blade of a knife had been fused by the heat. A bowl of dough prepared by the farmer's wife, Mrs. Sunderland, was smashed to pieces, and her dog and cat fled the building in fear. This was reported by the Todmorden & District News the following week. [1] 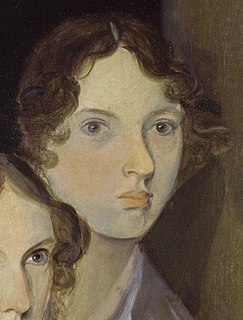 Emily Jane Brontë was an English novelist and poet who is best known for her only novel, Wuthering Heights, now considered a classic of English literature. She also published a book of poetry with her sisters Charlotte and Anne titled Poems by Currer, Ellis and Acton Bell with her own poems finding regard as poetic genius. Emily was the second-youngest of the four surviving Brontë siblings, between the youngest Anne and her brother Branwell. She published under the pen name Ellis Bell. 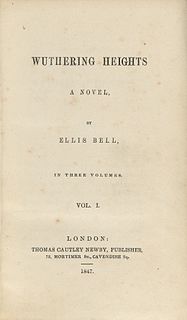 Wuthering Heights is an 1847 novel by Emily Brontë, published under the pseudonym Ellis Bell. It concerns two families of the landed gentry living on the West Yorkshire moors, the Earnshaws and the Lintons, and their turbulent relationships with Earnshaw's adopted son, Heathcliff. It was influenced by Romanticism and Gothic fiction. 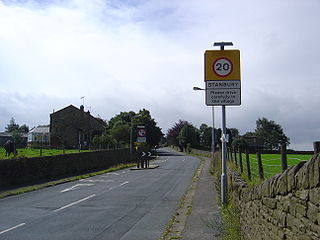 Stanbury is a village in the Haworth, Cross Roads and Stanbury civil parish, and in the metropolitan borough of the City of Bradford in West Yorkshire, England. The name Stanbury translates as Stone Fort from Old English. 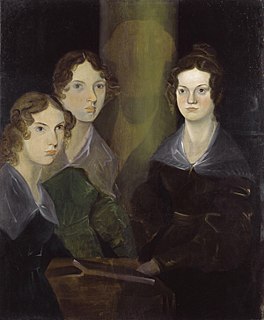 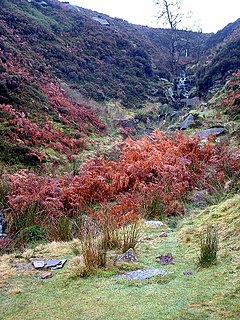 The Brontë Waterfall is a small waterfall located about a mile south west of Stanbury, near Haworth, West Yorkshire, England. The area surrounding the waterfall is mainly moorland and farmland but is part of Brontë Country. It is an area of outstanding beauty and famous for its association with the Brontë sisters. Below the falls can be found an old stone bridge named Brontë Bridge across South Dean Beck. The bridge was destroyed in a flash flood in May 1989 and rebuilt in 1990.

Oldfield is a small hamlet within the county of West Yorkshire, England, situated north of Stanbury and near to Oakworth. It is approximately 4 miles (6.5 km) west of the town of Keighley. It mainly consists of farmland and has panoramic views across the Worth Valley towards Brontë Country. Top Withens, the house featured in the novel Wuthering Heights, is clearly visible.

High Sunderland Hall was a manor house, built c. 1600 just outside Halifax, West Yorkshire and demolished in 1951 after falling into dereliction. The house is perhaps best known for having supposedly provided Emily Brontë with her description of Wuthering Heights, the house in her eponymous novel. The building stood just a few miles from Law Hill House, Southowram, where she spent some time as a school mistress. 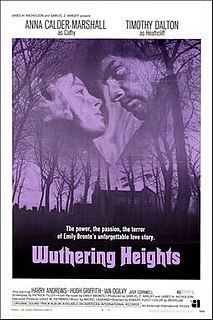 Wuthering Heights is a 1970 film directed by Robert Fuest and starring Anna Calder-Marshall and Timothy Dalton. It is based on the classic 1847 Emily Brontë novel of the same name. Like the 1939 version, it depicts only the first sixteen chapters concluding with Catherine Earnshaw Linton's death and omits the trials of her daughter, Hindley's son, and Heathcliff's son.

Ponden Hall is a farmhouse near Stanbury in West Yorkshire, England. It is famous for reputedly being the inspiration for Thrushcross Grange, the home of the Linton family, Edgar, Isabella, and Cathy, in Emily Brontë's novel Wuthering Heights since Bronte was a frequent visitor. However, it does not match the description given in the novel and is closer in size and appearance to the farmhouse of Wuthering Heights itself.

Walshaw Dean Reservoirs are three reservoirs situated above Hebden Bridge, West Yorkshire, England. They are between Hebden Bridge and Top Withins, a ruined farmhouse near Haworth, the reputed inspiration for "Wuthering Heights" in the novel of the same name by Emily Brontë.

The Brontë Way is a waymarked long-distance footpath in the northern counties of West Yorkshire and Lancashire, England.

Catherine Linton is a character in Emily Brontë's 1847 novel Wuthering Heights. She is the daughter of Edgar Linton and Catherine Earnshaw. Despite Heathcliff's attempts at exacting revenge on her for the indiscretions of her family, she eventually marries her true love, Hareton Earnshaw. In this way, she establishes equilibrium back in the story.

Hareton Earnshaw is a character in Emily Brontë's 1847 novel Wuthering Heights. He is the son of Hindley Earnshaw and Hindley's wife, Frances. At the end of the novel, he makes plans to wed Catherine Linton, with whom he falls in love.

Wuthering Heights is a fictional location in Emily Brontë's 1847 novel of the same name. A dark and unsightly place, it is the focus of much of the hateful turmoil for which the novel is renowned. It is most commonly associated with Heathcliff, the novel's primary male protagonist, who, through his devious machinations, eventually comes into ownership both of it and of Thrushcross Grange. Although the latter is by most accounts a far happier place, Heathcliff chooses to remain in the gloom of the Heights, a home far more amenable to his character. 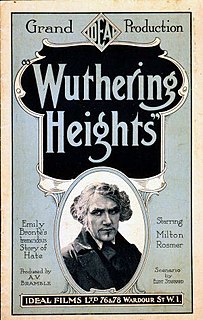 Wuthering Heights is a 1920 British silent drama film directed by A. V. Bramble and starring Milton Rosmer, Colette Brettel and Warwick Ward. It is the first film adaptation made of the 1847 novel Wuthering Heights by Emily Brontë, and was primarily filmed in and around her home village of Haworth. It is not known whether the film currently survives, and it is considered to be a lost film.