Tope Kolade Fasua (born September 11, 1971) is a Nigerian businessman, economist, writer and 2019 Nigeria Presidential candidate for Abundant Nigeria Renewal Party (ANRP. He is the founder and CEO of Global Analytics Consulting Limited, an international consulting firm with its headquarters in Abuja, Nigeria. As a political reformer, he founded the Abundant Nigeria Renewal Party (ANRP) and got elected since February 2018, to serve as the National Chairman of the Party. Fasua has authored numerous columns on newspapers and six books.

Fasua was born and raised in Lagos. For his secondary school education, he attended Army Comprehensive High School in his hometown Akure in 1985 before he went further to study economics in Ondo State University, where he successfully graduated and received award for the best overall result in the department, faculty and entire school in 1991. [1] In 1996, Fasua became a qualified accountant after attending the Institute of Chartered Accountants of Nigeria to obtain ACA(Associate Chartered Accountant). In between Fasua's movement from his long banking practice into starting his Consulting Firm, he attended London Metropolitan University to gain master's degree in Financial Markets and Derivatives in which he got Distinction in 2006. Harvard Business School, University of Groningen, Lonestar Academy, Texas are some the academic institutions where Fasua has attended for executive programs. Currently, he is a fellow Academic with his Ph.D in Public Policy and Administration, in view at Walden University.

After completing his bachelor's degree (Bsc. Economics 1991), Fasua started as a trainee banking officer in the Operations' Unit at Citizens Bank Limited, Victoria Island Lagos, he however spent over four years there before moving on to Standard Trust Bank Limited where he served as a manager. He also worked at Equatorial Trust Bank Limited where at first, he acted as the senior manager before he was promoted to the rank of the Regional Director in Abuja from 2001 to 2005.

As a businessman, he started his Consulting firm, Global Analytics Consulting Limited, serving as the group CEO from September 2006 till date.

Fasua being a prolific writer has authored fours books: Crushed, Things to Do Before Your Career Disappears, The Race for Capital, and A Change Will Come. Also featuring as a Policy and Public Affairs Analyst, he has been consistent in contributing articles on global and national economic matters, he is renowned columnist on various leading Nigerian Newspapers, and keeps featuring as an analyst on various TV and Radio programs.

At one point, he claimed to have written over 1000 articles.

On the 16th of December, 2016, Tope Fasua led a group of Nigerians to form a political party, Abundant Nigeria Renewal Party (ANRP), and on 14 December 2017, the party was finally announced a registered political party by INEC. ANRP, under him has grown its membership base to about 53000, as reported on the website on July 12, 2018. He was a panelist at 2019 MACAA conference.

At the ANRP National Executive Committee Meeting on the 17th of May, 2018, Tope Fasua announced his intention to join the race, to seek nomination to run for Presidency in the forthcoming 2019 General Elections.

Umaru Musa Yar'Adua was a Nigerian politician who was the President of Nigeria from 2007 to 2010. He was declared the winner of the Nigerian presidential election held on 21 April 2007, and was sworn in on 29 May 2007.

The Institute of Chartered Accountants of Nigeria (ICAN) is a professional accountancy body in Nigeria. It is one of the two professional accountancy associations with regulatory authority in Nigeria, the other being the Association of National Accountants of Nigeria (ANAN). The relationship between the two organizations has been tense. In 2007 ICAN attempted to have the bill establishing ANAN declared void.

Oceanic Bank International, commonly referred to as Oceanic Bank, was a bank in Nigeria that provided individual, commercial and corporate banking services.

Obiageli Ezekwesili, also popularly known as Oby Ezekwesili, is a Public Analyst/Senior Economic Advisor, AEDPI,Nigerian chartered accountant from Anambra state. She was born to father Benjamin Ujubuonu who died in 1988 and mother Cecilia Nwayiaka Ujubuonu who died on 21 June 2020. She is married to Pastor Chinedu Ezekwesili of the Redeemed Christian Church of God (RCCG). She was a co-founder of Transparency International, serving as one of the pioneer directors of the global anti-corruption body based in Berlin, Germany. She served as Federal Minister of Solid Minerals and later as Federal Minister of Education during the second-term presidency of Olusegun Obasanjo. Subsequently, she served as the Vice-President of the World Bank's Africa division from May 2007 to May 2012, later replaced by Makhtar Diop. Ezekwesili was a 2018 nominee for the Nobel Peace Prize for her work in transparency in the extractive sector. She also joined many Nigerians to console the family of Abba Kyari, praying for God to comfort the family of the late Chief of Staff of the federation.

Mohammed A Muhammed is a Nigerian politician, now a member of the Senate for Bauchi State. Married to Justice Zainab Adamu Bulkachuwa, President of the court of Appeal, Abuja.

Mohammed Sanusi Daggash is a Nigerian architect and economist who was elected as a member of the Federal House of Representatives in 1999, and became Senator for Borno North in 2003. President Umaru Yar'Adua appointed him Minister for the National Planning Commission of Nigeria in July 2007, and relieved him of his post in October 2008. He was again reappointed as Minister for Works in April 2010 by Acting President Goodluck Jonathan.

Jimoh Ibrahim is a Nigeria lawyer, politician, businessman and philanthropist. He is the chairman and chief executive officer of Global Fleet Group, a diversified conglomerate based in Nigeria, with business interests and subsidiaries in neighboring West African countries. 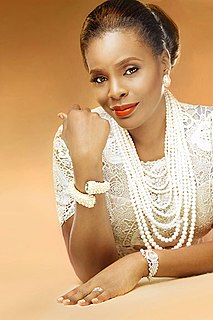 Olajumoke Olufunmilola Adenowo is an architect by profession. She is also an entrepreneur and philanthropist, a public speaker, radio host and author. CNN described her as "Africa's Starchitect" and The Guardian (Nigeria) has described her as "the face of Architecture in Nigeria". In 2018 she was recognised by the Royal Institute of British Architects (RIBA) as one of the inspirational women in architecture today.

Gbenga Francis Shobo is currently Deputy Managing Director, First Bank of Nigeria Limited; prior to which, he was Executive Director with the bank. A chartered accountant, Gbenga began his career with Coopers & Lybrand, a firm of chartered accountants, in 1986. Thereafter, he joined Victory Merchant Bank, commencing a career in banking that has spanned 23 years.

Solomon Olamilekan Adeola, also known by the alias Yayi, is a Nigerian politician serving as the Senator from Lagos West. From 2011 to 2015, he was the Chairman of House of Representatives Committee on Public Accounts. He is also a chartered accountant, and a member of the Association of Accounting Technicians (AAT).

Godwin Nogheghase Obaseki, is a Nigerian politician and businessman, who is currently the Governor of Edo State. He was first sworn in as governor on the 12th of November 2016. Before becoming governor, he had served as the chairman of the Edo State Economic and Strategy Team inaugurated by former Governor Adams Oshiomole in March 2009.

Ademola Adeleke is a Nigerian politician, He was a Senator representing Osun-west senatorial district until June 2019. He is from the Adeleke family of Ede in Osun State.

Aishah Ahmad Ndanusa' is a Nigerian accountant, financial analyst and financial manager. She is currently a Deputy Governor of the Central Bank of Nigeria since her appointment on 6 October 2017. She replaced Sarah Alade, who retired in March 2017. Prior to her appointment, she was Head Consumer Banking & Investment at Diamond Bank. She was confirmed by the Nigerian Senate on 22 March 2018. she was born in sokoto, although she's from Bida, of Niger State

Abundant Nigeria Renewal Party (ANRP) is a political party in Nigeria. It was founded on December 16, 2016 by Tope Fasua and some politically concerned Nigerians. The party got officially registered and announced by the Independent National Electoral Commission (INEC) as a full-fledged political party on December 14, 2017, which was exactly two days away from the one year anniversary of the party's formation.

SunTrust Bank Nigeria Limited (STBNL), is a Nigerian financial services provider, licensed as a commercial bank, by the Central Bank of Nigeria, the central bank and national banking regulator.

Aliyu Aziz Abubakar, a seasoned multidisciplinary Chartered Engineer with over 30 years post qualification experience, is a dynamic personality with diverse skills including Information Technology, Management and Administration. He is the current Director General and Chief Executive Officer of the National Identity Management Commission (NIMC). He had previously worked with some of the most progressive Government Institutions in Nigeria during their transformative years.