The Tordino is a river flowing in the province of Teramo, in the Abruzzo region of central Italy. [1] In Roman times it may have been known as "Batinus". [2]

The source of the Tordino is located between Monte Gorzano and Pelone, in the Monti della Laga subchain of the Apennines. After a course of 58 kilometres (36 miles), it flows into the Adriatic Sea. The river initially flows in a torrent to the east through the Gran Sasso National Park, then directs to the north around Mount Bilanciere before flowing in a south-easterly direction. The river curves northward near Torricella Sicura and flows past Teramo. The river flows northeast past San Nicolò a Tordino and Castellalto before flowing into the Adriatic Sea near Giulianova and Cologna Spiaggia. [3]

Near its source, the Tordino forms the Fiumata cascades and, a bit further along, the Tordino cascades. It then passes through Padula and Caiano, frazioni of the comune of Cortino. Watermills and olive oil presses are located in the higher elevations. The town of Teramo is located at the junction where the Tordino meets the Vezzola river. The mouth of the rivers is in the town of Giulianova. The Tordino river basin covers an area of approximately 453 square kilometres (175 square miles).

Tributaries on the left bank of the Tordino include the protective irrigation drain known as the Cavata (including three terraces and their associated cascades near the source of the Tordino), the Rivettino, the Castiglione, the Rivoletto, the Rio Verde, the large ditch known as "The Inferno," the 9-kilometre-long (5.6-mile) Fiumicino stream, and the Vezzola river. A large portion of the water of the Vezzola (which begins near the town of Rocca Santa Maria, has a length of 19 kilometres (12 miles), and passes through the Torricella Sicura community) is used by the ENEL (Ente Nazionale per l'Energia Elettrica) utility company to produce electricity.

Tributaries on the right bank of the Tordino include the Movese and Elce irrigation drains. Also located on the side is a stream known as the Fiumicello, this being formed by the watershed from the slopes of Mount Bilanciere. 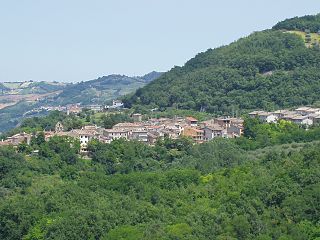 Valle San Giovanni is a small village in the province of Teramo, in the Abruzzo region of central Italy. It is a frazione of the town of Teramo. 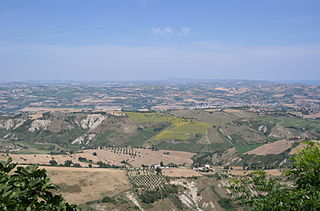 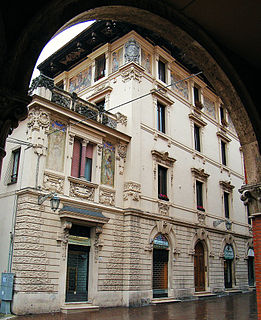 Teramo is a city and comune in the Italian region of Abruzzo, the capital of the province of Teramo.

The Metauro is a river in the Marche region of central Italy. It rises in the Apennine Mountains and runs east for 110 kilometres (68 mi) or 121 kilometres (75 mi) if the Meta is included as its uppermost reach.

The Marecchia is a river in eastern Italy. In ancient times it was known as the Ariminus which was from the Greek Aríminos. The source of the river is near Monte dei Frati which is east of Pieve Santo Stefano and southwest of Badia Tedalda in the province of Arezzo in Tuscany. It flows northeast into the province of Pesaro and Urbino in the Marche and is the only river that runs through Montefeltro. While flowing through Montefeltro, the river flows through the exclave Santa Sofia Marecchia, which belongs to Badia Tedalda. The river then flows past Sant'Agata Feltria and Novafeltria before crossing into the province of Rimini in Emilia–Romagna. At Torello, part of the commune of San Leo, it flows 1 km west of the Sammarinese territory Acquaviva and the San Marino River flows into it, but the Marecchia does not touch the San Marino border. Finally, the river flows past Verucchio and Santarcangelo di Romagna before flowing into the Adriatic Sea near Rimini.

The Aterno-Pescara is a river system in Abruzzo, eastern central Italy. The river is known as the Aterno near its source in the mountains, but takes the name Pescara, actually a tributary, nearer the city of Pescara and the Adriatic Sea.

The Tagliamento is a braided river in north-east Italy, flowing from the Alps to the Adriatic Sea at a point between Trieste and Venice. 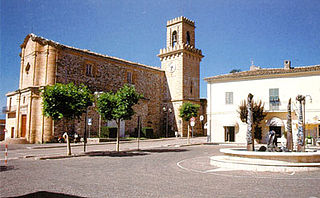 Torricella Sicura is a town and comune in the province of Teramo, in the Abruzzo region of central Italy. It is located in the natural park known as the "Gran Sasso e Monti della Laga National Park".

Roseto degli Abruzzi, more commonly Roseto, is a town and comune of the province of Teramo in the Abruzzo region of central Italy. It is a beach resort on the Adriatic Sea and has about 24,000 inhabitants. Geographically, Roseto is positioned on estuaries of the Vomano and Tordino Rivers. It is the second largest city in the province. In the last decade the city has witnessed a good deal of growth in the quarters of Borsacchio slightly to the north, Campo a Mare along the seacoast and Voltarrosto to the west.

Valle Castellana is a village and comune in the Province of Teramo, in the Abruzzo region of central Italy. It is a member of the Italian community of surrounding mountain villages, Monti della Laga. It is located in the natural park known as the Gran Sasso e Monti della Laga National Park. 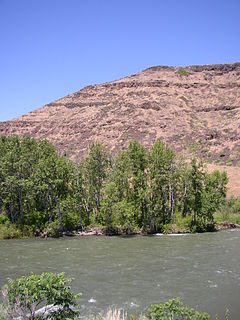 The Tronto is a 115-kilometre (71 mi) long Italian river that arises at Monti della Laga and ends in the Adriatic Sea at Porto d'Ascoli, San Benedetto del Tronto. It traverses the Lazio, Marche, and Abruzzo regions of Italy. 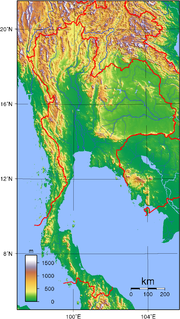 Magliano is a village in the Italian region of Abruzzo. It is a frazione of the comune of Torricella Sicura, in the Province of Teramo.

The Esino is a river in the Marche region of central Italy.

Ioanella is a frazione of the Commune of Torricella Sicura in the Province of Teramo, Italy 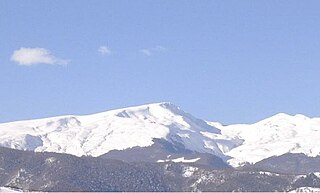 Monte Gorzano is the highest peak in the Monti della Laga, in northern Abruzzo, central Italy. It has an elevation of 2,458 metres (8,064 ft) and is also the highest peak of Lazio. It is located on the boundary with the provinces of Teramo in the Abruzzo region and Rieti in the Lazio region. The source of the Tordino is near Monte Gorzano (Fiumata).

The Livenza is a river in the Italian provinces of Pordenone, Treviso and Venice. Its source is near Polcenigo and Caneva in Pordenone. It flows in a southeasterly direction past Sacile and forms the border between the provinces of Pordenone and Treviso roughly between Brugnera and Motta di Livenza. It continues to flow in a southeasterly direction, forming the border between the provinces of Treviso and Venice before flowing into the province of Venice near Santo Stino di Livenza. It flow near La Salute di Livenza and finally enters the Adriatic Sea near Caorle.

The Salinello is a river in Italy. It is located in the province of Teramo in the Abruzzo region of southern Italy. The source of the river is in the Monti della Laga range southwest of Montagna dei Fiori. The river flows eastward and curves northeast near Civitella del Tronto. The river then curves southeast near Sant'Egidio alla Vibrata and the border with the province of Ascoli Piceno. Finally, the river flows east near Sant'Omero and enters the Adriatic Sea near Giulianova and Tortoreto Lido.