Trinity College Theological School (TCTS) is an educational division of Australia's Trinity College, [1] the oldest residential college of the University of Melbourne. It is also one of the constituent colleges of the University of Divinity. The School provides theological education and shapes men and women for ordained and lay ministry in the Anglican tradition, as well as providing other programs of study, including higher degrees by research.

The school was founded in 1877 by Bishop James Moorhouse for the purpose of training a "learned and dedicated clergy" in Victoria, obviating the need to send candidates interstate for training. [2] From this founding vision the school's focus has now broadened to modern forms of theological education and formation for lay people as well as ordination candidates. Trinity teaches across the broad-church, moderate and Anglo-Catholic traditions of theology, worship and spirituality and seeks to engage critically and reflectively with the contemporary world. [3]

Until the 1960s, Trinity theological students normally undertook a degree program of the University of Melbourne, followed by the Licentiate in Theology of the Australian College of Theology. In 1969 Trinity became a foundation member of the ecumenical United Faculty of Theology (UFT). This partnership with the Jesuit Theological College and Methodist, Presbyterian and Congregational theological schools (later combined as the Uniting Church Theological Hall) created a rare ecumenical context for higher learning in theology.

Trinity was a founding member of the Melbourne College of Divinity (MCD) from its inception in 1910. In 2012, the MCD became the University of Divinity and, with the dissolution of the UFT at the end of 2014, Trinity became one of the present 11 colleges of the university. The University of Divinity is the awarding institution of all the degree programs offered within the college. In 2018, Trinity College appointed the university's first research professor and first post-doctoral research fellow. [4]

Trinity students have access to the collections of both the Leeper Library at Trinity and the Dalton-McCaughey Library, the joint collection of the Jesuit and Uniting Church colleges, with one of the largest theological collections in the southern hemisphere. [5]

Leadership of theological education at Trinity was originally the responsibility of the college chaplains under the supervision of the warden. Since the 1970s there have been lecturers specifically appointed to teach in and lead the school, holding the positions of Stewart Lecturer, Director and, more recently, Dean. The following have held these offices:

Trinity has produced many clergy who have held significant appointments in the Anglican Church. These include: 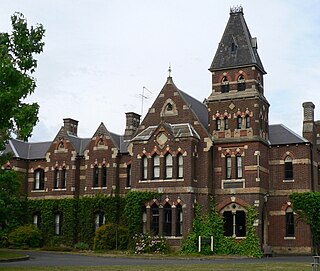 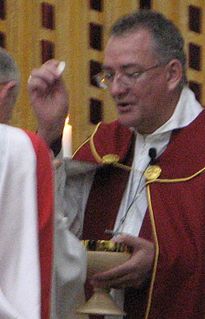 Phillip John Aspinall is an Australian Anglican bishop. He has been the archbishop of the Anglican Diocese of Brisbane since February 2002 and was also the Primate of the Anglican Church of Australia from July 2005 until he stood down on 4 July 2014.

Ridley College, formerly known as Ridley Melbourne, is a Christian theological college in the parklands of central Melbourne in the Australian state of Victoria. Established in 1910, it has an evangelical foundation and outlook and is affiliated with the Australian College of Theology and the Anglican Church of Australia. The college offers on-campus and distance learning and provides training for various Christian ministries in a range of contexts.

The United Faculty of Theology (UFT) was a recognised teaching institution of the University of Divinity in Melbourne, Australia. It was founded in 1969 as an informal association of theological colleges and ceased operating in December 2014.

The National Catholic Institute of Theology (NCIT) is a Catholic theological institute established in Karachi, Pakistan in September 1997. It offers academic courses leading to a diploma in theology, as well as programs for laypeople and religious involved in Church ministries.

Andrew Brian McGowan is an Australian scholar of early Christianity and an Anglican priest. He is McFaddin Professor of Anglican Studies at Yale Divinity School and dean and president of the Berkeley Divinity School at Yale.

Dorothy Ann Lee is an Australian theologian and Anglican priest, formerly dean of the Trinity College Theological School, Melbourne, a college of the University of Divinity, and continuing as Frank Woods Distinguished Professor of New Testament. Her main research interests include the narrative and theology of the Gospels, particularly the Gospel of John, spirituality in the New Testament, the Transfiguration and Anglican worship.

James Alexander Grant was an Australian Anglican bishop who was the Dean of Melbourne from 1985 to 1999. 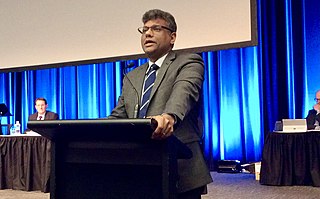 Kanishka de Silva Raffel is a British-born Australian Anglican bishop of Sri Lankan descent, who has served as the Anglican Archbishop of Sydney since 28 May 2021. He previously served as the 12th Dean of St Andrew's Cathedral, Sydney from 4 February 2016 until his installation as archbishop.

Richard Stanley Treloar is an Australian Anglican bishop. He is the current Bishop of Gippsland in the Province of Victoria.

Colleen Anne O'Reilly is an Australian Anglican priest. She was made a Member of the Order of Australia in 2021 in recognition of her significant service to the Anglican Church of Australia, and to religious education. O'Reilly has been a strong advocate for women's leadership in the Anglican Church and women's ordination since the 1970s and described by Muriel Porter as "the ‘mother' of the movement that was a key factor in bringing about the ordination of women through many years of determined struggle".

Wollaston College is an Australian educational institution in Perth, Western Australia, established in 1957. It provides theological education for both lay and ordained people of the Anglican Diocese of Perth, as well as forms candidates for ordination in the Anglican Church of Australia. Through its partnership with Trinity College Theological School in Melbourne, Wollaston College teaches units within, and its academic staff are accredited by, the University of Divinity.