Melbourne University Football Club, often known simply as University, is an Australian rules football club based at the University of Melbourne. The club fields two teams, known as the "Blacks" and "Blues, who both compete in the Victorian Amateur Football Association (VAFA) in the William Buck Premier Division.

The club achieved prominence by being a member of Victoria's elite competition in the early 20th century, the Victorian Football League (VFL), between 1908 and 1914, and has also fielded a women's team (nicknamed the "Mugars") in the Victorian Women's Football League (VWFL) and VFL Women's (VFLW) until 2019. Although there are no records of its exact formation, University's first recorded match took place in the same month that the Castlemaine Football Club was formed, making it likely that University is the second-oldest club in Australia after the Melbourne Football Club.

University was founded in 1859 by students and graduates of the University of Melbourne. The first report of the university participating in a match was against St Kilda (not the later VFL/AFL club) in June 1859. According to ‘Gymnastic’, writing in the sporting newspaper Bell's Life in Victoria , the ‘long pending match’ finally came off between two teams of 15. University was captained by a player called Phillips, and St Kilda emerged the winners. The winning team was determined by a method whereby the first team to score two out of three goals was victorious.

That same year it played against teams from Albert-park, Carlton, Melbourne, Royal Park and South Yarra. In 1861, University defeated Melbourne to win the first-ever trophy for Australian football, instituted as part of the Calendonian Society's Games.

The club was nicknamed The Students, The Professors and The Shop. The players wore a black guernsey with a blue chevron and blue collars and cuffs (the same design is still used to this day), black and blue socks and an optional black and blue cap. Players had to have matriculated or hold a higher degree to be eligible to play in the team.

The club was not particularly successful: it never finished higher than sixth in the ten-team competition, and never played in the finals. It finished last in the competition from 1911 to 1914, and lost its last 51 games in a row. In total, it played 126 games for 27 wins, 2 draws and 97 losses between 1908 and 1914.

The club is unique among VFL/AFL clubs in never having any professional players, and this was a major factor in its decline in competitiveness after 1911, when player payments were becoming common amongst the other clubs. It became clear that the club could not remain competitive or viable in the VFL if it wished to remain amateur; and the fact that its players were focussed primarily on their studies, particularly during mid-year examinations, was another logistical issue for the club. As a consequence, the club withdrew from the VFL at the end of 1914. Many of its players transferred to the Melbourne Football Club, under an informal agreement between the clubs aimed at keeping the best University players together in the same club to keep the University intervarsity team strong. [2] [3]

Bert Hurrey played the most games for the club (101), and was the only University player to play at least 100 games in the VFL. Roy Park was the club's leading goalscorer, kicking 111 goals between 1912 and 1914, including winning the VFL's Leading Goalkicker Award in 1913 with 53 goals for the home-and-away season, a remarkable effort considering the team itself managed only 115 [4] and finished last on the ladder without a win.

The following is a list of coaches to have coached the club in the VFL.

In the summer of 1919, after the War, Melbourne University began to rebuild its football involvement. Deciding not to reapply for a position in the VFL, they were instead requested by the VFL to supply two teams to the newly formed VFL Reserves competition, or the Victorian Junior Football League. These two teams were initially called University A and B, but soon became known as "University Blues" and "University Blacks", respectively (the teams were only officially called the Blues and Blacks in 1930). The Blues contested the 1919 and 1920 VJFL Grand Finals, losing to Collingwood on both occasions; the Blacks, who joined the 1919 VJFL season only at short notice when Melbourne was unable to organise its own junior team, [5] moved to the Metropolitan Amateur Football Association in 1920, and the following season, were joined by the Blues. Both contested the 1921 MAFA Grand Final, with the Blacks winning what to date is the only grand final the two teams have contested in the MAFA or VAFA.

Up until the 1950s, the Blacks were the leading University side as well as one of the dominant sides in the Amateur competition, winning 11 A Section premierships by 1949. However, in the later part of the century the Blues established themselves as the premier University side, and are currently the longest serving club to play in the top division of the VAFA.

Throughout their history, the Blues and Blacks have often played together in A section of the MAFA/VAFA, and with the Blacks return to A section in 2008 after a prolonged absence, the teams met again for the first time in 25 years. In head to head matches, the Blues lead the win tally with 43 wins to the Black's 36 and one draw. The Blacks and the Blues added to their head to head history in 2015 after the Blues won promotion after only one year in B section in 2014. Unfortunately the Blacks dropped to B in 2018.

Both teams have consistently been a spawning ground for young players who go on to the AFL. To date 240 MUFC players have played in the VFL/AFL competition. Latest is Daniel Nicholson (Melbourne 2011)

From 1955 until 1996, an additional team was fielded by the club called "University Reds" which competed in the lower sections of the VAFA with a firsts and reserves team. When the team was discontinued by the club, players and supporters of the team decided to keep the team operating and it continues to this day as Fitzroy Reds. The Fitzroy Reds merged with the Fitzroy Football Club in 2008.

Formation of women's football side

The MUWFC field three senior sides and three junior sides across three different leagues. Historically having senior teams in both the Victorian Women's Football League and WRFL/EDFL Youth Girls Competition, in 2016, upon formation of the inaugural statewide competition aligned with the Victorian Football League, MUWFC entered a senior side, with a second and third team competing in the Premier Division and Division 3 of the Victorian Women's Football League respectively. The WRFL/EDFL Youth Girls Competition also expanded from under-13s side and under-18s side to also include and under-15s side.

In 2002, MUWFC won their first premiership against St Albans in Division 1. This was followed by double premierships in 2003 and 2005, to make up the club's five premierships.

In 2005, an Under-18s Youth Girls team was formed. They started competing in the Essendon Districts Football League in 2012.

From 2009, North Melbourne partnered with the club, allowing them to use Arden Street Oval for training and matches. Under this arrangement, Melbourne University served as North Melbourne's VFL Women's affiliate from 2016 until the end of 2019, when North Melbourne decided to field a standalone team instead. [6]

In 2011, an Under-12s team was established in conjunction with North Melbourne Football Club. 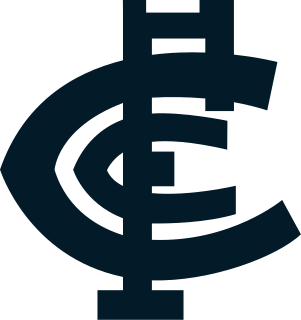 The Carlton Football Club, nicknamed the Blues, is a professional Australian rules football club based in the inner-Melbourne suburb of Carlton North, Victoria. Founded in 1864, the club competes in the Australian Football League, and was one of the competition's eight founding member clubs in 1896.

The Preston Football Club, which trades and plays as the Northern Bullants, is a long-established Australian rules football club based in Preston that plays in the Victorian Football League (VFL). It plays its home games at the Preston City Oval; and during its affiliation with Carlton also played games at Princes Park.

Prahran Assumption Football Club, nicknamed The Two Blues, is an Australian rules football club based at Toorak Park in Orrong Road between High Street and Malvern Road, Armadale, in Melbourne, Victoria, Australia. The club is currently in Division 1 of the Victorian Amateur Football Association (VAFA). The nickname Two Blues comes from the club uniform which has been royal blue and sky blue since the club formed in 1886.

The 1915 Victorian Football League season was the 19th season of the elite Australian rules football competition.

The Hampton Rovers Amateur Football Club was founded in 1929 and is located in Melbourne, Australia. The club competes in the Victorian Amateur Football Association and the South Metro Junior Football League and has both men's and women's teams.

Charles Percy Abbott is a former Australian rules footballer who played with Hawthorn in the Victorian Football League (VFL), a polo player, and the recipient of the Australian Sports Medal.

Australian rules football was one of two demonstration sports at the 1956 Summer Olympics held in Melbourne.

The AFL Australian Football League is the top professional Australian rules football league in the world. The league consists of eighteen teams: nine based in the city of Melbourne, one from regional Victoria, and eight based in other Australian states. The reason for this unbalanced geographic distribution lies in the history of the league, which was based solely within Victoria from the time it was established in 1897, until the time the league expanded through the addition of clubs from interstate to the existing teams starting in the 1980s; until this expansion, the league was known as the VFL (Victorian Football League).

Peter Kanis is a former Australian rules footballer who played with Hawthorn in the Victorian Football League (VFL).

Mitchell Hannan is a professional Australian rules footballer playing for the Western Bulldogs in the Australian Football League (AFL), having been initially drafted to the Melbourne Football Club. A forward, 1.90 metres tall and weighing 87 kilograms (192 lb), Hannan has the ability to play as a forward and in the midfield. After failing to play in the TAC Cup as a junior, he joined the St Bernard's Football Club in the Victorian Amateur Football Association (VAFA) where he won a premiership and the best on ground in the 2015 VAFA Grand Final. The next year, he played with Footscray in the Victorian Football League (VFL) where he won his second premiership in as many years. His performances in the VAFA and VFL saw him recruited by the Melbourne Football Club in the 2016 AFL draft and he made his debut in the opening round of the 2017 season.

VFL Women's (VFLW) is the major state-level women's Australian rules football league in Victoria. The league initially comprised the six premier division clubs and the top four division 1 clubs from the now-defunct Victorian Women's Football League (VWFL), and has since evolved into what is also the second primary competition for AFL Women's (AFLW) clubs in Victoria. The league often runs concurrently with the Victorian Football League (VFL).