The All-Australian team is an all-star team of Australian rules footballers, selected by a panel at the end of each season. It represents a complete team, including an interchange bench, of the best performed players during the season, led by that season's premiership coach.

This change was reverted ahead of the 2014 series, with only players who have been selected at least once in any All-Australian team being eligible for selection.

The earliest concept considered to be a precursor to the All-Australian team was an annual team selected by Sporting Life magazine between 1947 and 1955. A panel of sportswriters at the magazine selected a full team of eighteen from all ANFC-affiliated competitions. For a time, AFL historians considered these teams to be official All-Australian teams, but no longer recognises them as such. [1]

In 1991, following the VFL's conversion to a national competition and its renaming as the Australian Football League (AFL), an annual All-Australian team based on performances during the AFL premiership season was introduced. [2]

Since 1999, the All-Australian coach is the coach of the premiership-winning side that year.

The following lists are for senior teams only.

The AFL website recognizes players who were named in the VFL Team of the Year from 1982 to 1990 as having All-Australian status. This was a team picked by Victorian selectors.

These teams were once considered to be equivalent to All-Australian selection, but are no longer recognised as such.

Most times selected in Carnivals era

Nicholas Riewoldt is a former Australian rules footballer who played for the St Kilda Football Club in the Australian Football League (AFL). He was the first draft selection in the 2000 AFL draft. He was the captain of St Kilda in 2005 and from 2007 to 2016. Riewoldt holds the all-time record for most marks in VFL/AFL history, surpassing Gary Dempsey in Round 15, 2017.

Pat Philley is a former Canadian soccer player. He was a national champion with Vancouver City FC in 1950. He was Canada's starting centre half and captain during three matches in FIFA World Cup Qualifiers in 1957. He is an honoured member of the Canada Soccer Hall of Fame.

James Randell Hughes is a former American football safety who played six seasons in the National Football League for the Dallas Cowboys. He played college football at the University of Oklahoma and was drafted in the fourth round of the 1975 NFL Draft.

Anthony Liscio was an American football offensive tackle in the National Football League for the Dallas Cowboys. He played college football at the University of Tulsa. 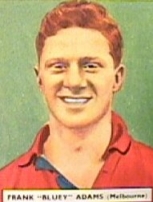 Frank Adams, known as Bluey Adams, was an Australian rules football player, who played in the Victorian Football League (VFL) for the Melbourne Football Club.

Donald 'Don' Wilfred Gale was an Australian rules football player who played for Wynyard and Burnie in the NWFU and Hobart in the TFL. He was selected in regional and state representative teams.

John Chick was an Australian rules footballer who played with Carlton in the VFL during the 1950s.

James Kenneth Leitch is a former Australian rules footballer who played for Melbourne in the VFL during the mid 1960s. He later played in Tasmania and represented the state in interstate matches.

Geoffrey Roy Long is a former Australian rules footballer who played for City/City-South, in the Northern Tasmanian Football Association (NTFA) from 1948 to 1960, won a number of awards and played at representative level.

Football Inquest is the name of two Australian television series, which both aired in Melbourne. The first aired 1957 on GTV-9, while the second aired 1960-1974(?) on HSV-7. There was also a South Australian version.

Midlands District was a select provincial amateur rugby union team that drew its players mainly from central east Scotland, roughly corresponding from around Stirlingshire, east to Fife and northwards to Perthshire and Angus. Historically the Midlands team played against other Scottish districts, and provided players to the North of Scotland

The 1956–57 Scottish Inter-District Championship was a rugby union competition for Scotland's district teams.

John Douglas Fitzallen was an Australian rules footballer who played in Tasmania during the 1950s and 1960s. He represented the state several times in interstate matches including the Brisbane Carnival in 1961. He was inducted into the Tasmanian Football Hall of Fame in 2006.