The teams play 3 round-robin 45-minute matches. If any match ends in a draw, it is decided by a penalty shoot-out. Three points are awarded for a victory during regular play, with no points going to the loser. If the match is decided by penalties, the winner is awarded 2 points and the loser 1.

Persatuan Sepakbola Indonesia Balikpapan, commonly known as Persiba Balikpapan, is an professional football club based in Balikpapan, East Kalimantan, Indonesia. The club plays in Liga 2, after relegation from Liga 1 in 2017 season.

The 2001 Liga Indonesia Premier Division was the seventh season of the Liga Indonesia Premier Division, the top Indonesian professional league for association football clubs, since its formation in 1994. It began on 14 January and ended on 7 October. It was contested by 28 teams. Persija won the title after beating defending champions, PSM 3–2 in the final. RCTI provided broadcast coverage for the season.

The 2009–10 Indonesia Super League is the second edition of this newly born competition (which replaced the Premier Division as the top rank of football system in the country.

The 2011–12 Indonesia Super League is the fourth season of the Indonesia Super League (ISL), a fully professional football competition as the top tier of the football league pyramid in Indonesia. The season scheduled begins on 1 December 2011. Persipura Jayapura are the defending champions, having won their 3rd league title the previous season. 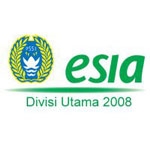 Sandi Darman Sute is an Indonesian professional footballer who plays as a defensive midfielder for Liga 1 club RANS Cilegon.

Liga 1 is the men's top professional football division of the Indonesian football league system. Administered by the PT Liga Indonesia Baru, Liga 1 is contested by 18 clubs and operates on a system of promotion and relegation with Liga 2.

The 2017 season is Persija's 84th competitive season. Along with Liga 1, the club will compete in cup tournaments which yet to be announced. The season covers the period from 1 January 2017 to 31 December 2017.

The 2009–10 Arema Indonesia season is Arema's 23rd competitive season. The club will compete in Indonesia Super League and Piala Indonesia. Arema Indonesia a professional football club based in Malang, East Java, Indonesia. The season covers the period from 1 July 2009 to 1 August 2010.