Tropical Heat (known as Sweating Bullets in the United States [1] ) is a Canadian action series produced in co-operation with Mexico and Israel that aired between April 8, 1991 to October 18, 1993.

The series ran for three seasons totaling 66 episodes. Season one was filmed in Puerto Vallarta, Mexico; due to tax breaks the production was eligible for under the North American Free Trade Agreement (NAFTA). Season two was filmed in Eilat, Israel. Season three was filmed in Pretoria, South Africa, with some sequences shot in Mauritius. [1] [2] In the United States, it aired as part of the CBS umbrella series Crimetime After Primetime .

The plot revolves around private investigator, Nick Slaughter, an ex-DEA agent, who after arriving in the fictional resort town of Key Mariah, Florida, and setting up a detective agency there, meets up with local tourist agent, beautiful Sylvie Girard, to solve a variety of different cases.

The series was particularly popular in Serbia, where it gained cult status. In a tumultuous social environment – with a UN trade embargo imposed on the country and civil war raging nearby – Nick Slaughter's character became a tongue-in-cheek role model, particularly among urban youth, and eventually a symbol of opposition politics.

During the 1990s, the series was broadcast on four Serbian television stations – TV Politika (1992–93), NS+ (1993–94), RTS 3K (1994–95), and RTV Pink (1996–97) – and rerun numerous times. [3] Aside from its dry humor and exciting plot, the show was extremely well received because its idyllic tropical island atmosphere was an absolute contrast to mid-1990s Serbia. The reruns in the then-isolated country made the show immensely popular, turning it into a minor national cultural phenomenon.

The notion of Nick Slaughter being a widely received hero in Serbia probably began in the Belgrade suburb of Žarkovo where, now-legendary, graffiti "Sloteru Niče, Žarkovo ti kliče" ("Nick Slaughter, Žarkovo hails you", which rhymes in Serbian) appeared. Soon afterward during the massive months-long protests throughout winter 1996–97 against the alleged election fraud perpetrated by Slobodan Milošević and his party at the November 1996 local elections, the slogan "Slotera Nika, za predsednika" ("Nick Slaughter for President", also rhymes in Serbian) became popular on banners and badges as a symbol of opposition to the regime. Another popular slogan was "Svakoj majci treba da je dika, koja ima sina k'o Slotera Nika" ("Every mother should be proud to have a son like Nick Slaughter"). Serbian punk band Atheist Rap paid a tribute to the series' protagonist in the song "Slaughteru Nietzsche" with its graffiti-based chorus "Sloteru Niče, Srbija ti kliče" ("Nick Slaughter, Serbia hails you") on their 1998 album II liga zapad . In 2008, Rob Stewart performed the song with the band on stage.

Many local bars, taverns, and summer patios in Serbia were (re)named Tropical Heat in honour of Nick Slaughter and the popular TV show. They were usually located along the rivers, to resemble "The Key Mariah Spirit".[ citation needed ]

Apparently, no one associated with the show was aware of its extraordinary popularity in Serbia until December 2008 when Canadian actor Rob Stewart who played Nick Slaughter in the series accidentally discovered it by stumbling upon a Facebook fan group named "Tropical Heat/Nick Slaughter" with some 17,000 (mostly Serbian) followers. After familiarizing himself with the cause and the circumstances of his Serbian fame, the mostly unemployed 48-year-old Stewart, along with a filmmaker friend Marc Vespi and his sister Liza, decided to attempt to make Slaughter Nick for President, a documentary about it. [4] To that end, they contacted the band Atheist Rap and it was soon arranged for Rob to appear on stage as their guest at the To Be Punk Festival in Novi Sad on June 6.

By late March 2009 the news was leaked to Serbian press and several media outlets carried items that Rob Stewart would be coming to Serbia in May or early June as guest of Atheist Rap in order to film a documentary on his character's popularity in the country during the 1990s. [5] [6] [7] Stewart and his partners contacted Srđa Popović, former activist of Otpor!, the Serbian student movement that played a significant role in eventually bringing down Milošević. On June 3, 2009, Stewart arrived in Belgrade to a hero's welcome with enormous media attention afforded to his visit. [8] [9] [10] [11] [12] [13] With Atheist Rap and Popović as their hosts and guides through Serbia, and in between the documentary shooting schedule, Stewart made the media rounds, appearing on talk shows (Piramida [14] and Fajront Republika [15] ), giving interviews, and making public appearances such as planting of the maple trees in Žarkovo with John Morrison, Canadian ambassador to Serbia.

Stewart believed that the popularity of the show was due to its portrayal of Nick Slaughter as a bumbling idiot. [16] Despite his flaws, Slaughter was however brave, honest and caring. Stewart noted that the Serbs have a very "self-deprecating" sense of humor, so Slaughter's bumbling idiot qualities appealed to them.. [16] Stewart also noted during his visit to Serbia that he was told by countless people that they loved the character because of his indomitable qualities and his refusal to give up, which matches with the Serb self-image. [16]

As a result of their June 2009 stay in Belgrade and Novi Sad, a six-minute documentary promo was put together and entered in the Roma Fiction Fest in Rome, Italy on July 8, 2009 under the "work in progress" section. [17]

Two episodes of the show were re-edited into a feature-length film, Criss Cross. IMDb states this received a release in 2001.

On March 16, 2021, Mill Creek Entertainment will release Tropical Heat- The Complete Series on DVD in Region 1. [19] 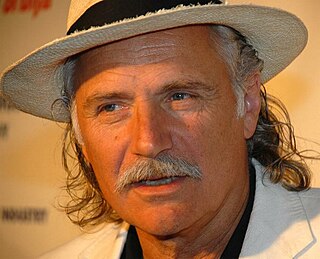 Rade Šerbedžija is a Croatian actor, director and musician. He is known for his portrayals of imposing figures on both sides of the law. He was one of the best known Yugoslav actors in the 1970s and 1980s. He is internationally known mainly for his supporting roles in Hollywood films such as Harry Potter and the Deathly Hallows: Part 1, X-Men: First Class, The Saint, Mission: Impossible 2; his role as Boris the Blade in Snatch; and for his recurring role as former Soviet Army General Dmitri Gredenko in Season 6 of TV action series 24. 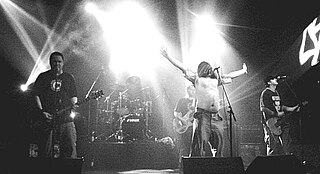 Atheist Rap is a Serbian punk rock band from Novi Sad, formed in 1989, which has released six studio albums, one compilation album and one live DVD. Their music is often characterized as "fun punk" due to its cheerful music and vocals. Their lyrics are usually critical of society and politics and are often humorous accounts of everyday events.

Exit is a summer music festival which is held at the Petrovaradin Fortress in Novi Sad, Serbia. Founded in 2000, it has twice won the Best Major Festival award at the European Festivals Awards, for 2013 and 2017. EXIT has also won the "Best European Festival" award at the UK Festival Awards in 2007. In March 2018 Regional Cooperation Council awarded EXIT Festival as Champion of Regional Cooperation for 2017.

Čukarica is a municipality of the city of Belgrade, Serbia.

Crimetime After Primetime is the umbrella title for a group of late-night crime-investigation shows that debuted at various times on CBS during 1991 and 1992, running through late summer of 1993.

Rob Stewart is a Canadian actor born in Toronto, Ontario, Canada, known for the lead role of Nick Slaughter in the action-comedy television series Tropical Heat, and his recurring roles as Roan in Nikita and Khlyen in Killjoys. 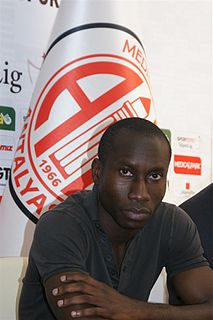 Lamine Diarra is a retired Senegalese professional footballer who played as a striker. He was capped once for Senegal at full level.

OFK Žarkovo is a professional football club based in Žarkovo, Belgrade, Serbia. They compete in the Serbian First League, the second tier of the national league system.

Vratiće se rode is a Serbian television series. Broadcast on B92 television in Serbia, it premiered on November 9, 2007. The series is directed by Goran Gajić and written by Nikola Pejaković along with Ranko Božić while 4 episodes were co-written between the two of them. It is produced by Cobra Films and the Adrenalin production house. 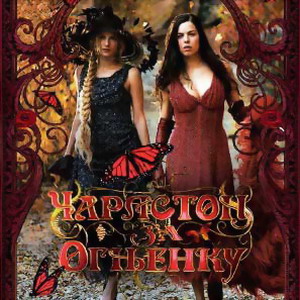 Tears for Sale, also known internationally as Charleston & Vendetta or also as Funeral Brides, is a 2008 Serbian drama film.

Fajront Republika was a Serbian talk show / sketch show that aired weekly on 1Prva from December 2008 until June 2011.

Ja imam talenat! is a Serbian television series, format of Got Talent series. It is hosted by Vladimir Aleksić and Ivana Bajić. Judges have included Ana Nikolic, Srđan Žika Todorović, Stefan Đurić Rasta, Ivan Tasovac, Nataša Ninković, Ivan Bosiljčić, Danica Maksimović, Aleksandar Milić Mili and Mina Lazarević. The show debuted on 12 September 2009. A total of five series have been broadcast. The first and fifth series were broadcast on RTV Pink while the other series were broadcast by Serbian public service broadcaster RTS.

Čedomir Đoinčević is a Serbian former football manager and player.

Milica Pavlović is a Swiss-born Serbian singer, model and actress who received regional recognition on the singing competition show Zvezde Granda in 2011.

Nikola Milenković is a Serbian professional footballer who plays as a centre-back and right-back for Fiorentina and the Serbia national team.

Stefan Đurić, better known as Rasta, is a Serbian recording artist, producer and founder of the record label imprint Balkaton. Regarded as one of the most popular artists from his generation, he is best known for using and popularizing the Auto-Tune pitch correction effect on the regional music scene and is also noted for often promoting marijuana in his songs. Dalibor Andonov, known professionally as Gru, was a Serbian rapper, musician and DJ. His song Biću tu from the 1996 album Gru 2, gained him popularity in Eastern Europe, as well as the 2010 release I dalje me žele alongside Serbian rapper Ajs Nigrutin. His album Gru 2 is the most commercially successful album in Serbia, selling four million copies, and reaching certified gold status in Serbia. Other than his immense popularity in the Balkans, he is well known in other countries of Eastern and Northern Europe. He has been dubbed The Serbian Rap Machine.